October Horror - All The Colors Of The Dark


Italian films from the 60s and 70s present a problem for me...Many of them were made without any recording of sound during the filming - dialog was synched during post-production. This makes for some odd pairings of facial expression and vocal inflection which can sometimes pull you right out of a movie.

And yet, many of my favourite movies come from this period. Fellini, Leone and Argento all worked this way (at least for most of their films) and created stunning visual works of art with interesting methods of story telling. Whether they simply had greater focus on the visuals because they had no concern for the audio is hard to say, but you can forgive the lip-synching after awhile (or even totally forget it's occurring).

It gets somewhat trickier in the non-masterpiece realms, but I think I'm starting to come around to just accepting it and getting on with the positives to be found in these films. Take for example Sergio Martino's 1972 horror film "All The Colors Of The Dark" (yes, I'm dropping my Canadian 'u' from the proper spelling of 'colour' since that's how most people spell the film title).

After beginning with a quiet static shot of a tree and a sunset, we cut to a freaked out dreamscape with a grotesque elderly woman, an expectant mother, blood, etc. So it's a bit of an unsettling beginning which is magnified by the obvious dubbing of not only voices but ambient sounds as well. So the lack of sound synching actually helps somewhat in achieving the desired effect in the viewer. That may not necessarily have been the intent - just call it rationalization on my part.

Just as you're trying to find your bearings we meet the owner of this dream - Jane, played by the lovely Edwige Fenech. 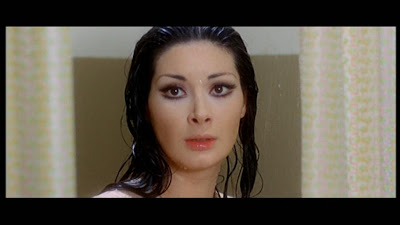 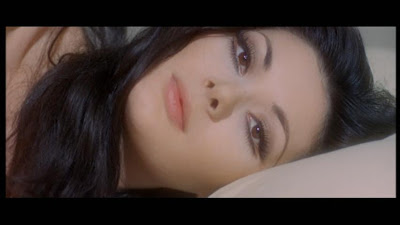 It's only recently that I became aware of Edwige Fenech. Cinebeats had an excellent profile of her and discussed her popularity as well as her return to the horror genre with a role in "Hostel 2". She's not just gorgeous, but she brings some subtlety to films that don't usually (at least from what I've seen) pay a great deal of attention to that.

Her character Jane is having terrible nightmares which is starting to affect her relationship with her boyfriend. Her mother was murdered when she was young and she has recently lost her unborn child in a car accident. She has been suffering recurring images of a man with piercing blue eyes attacking her, so her boyfriend suggests vitamins while her sister gets her to go to a psychiatrist. Neither help a great deal... 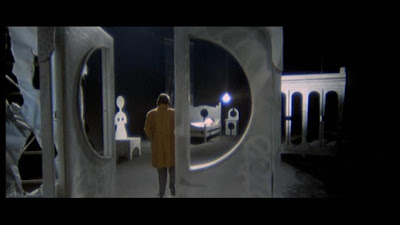 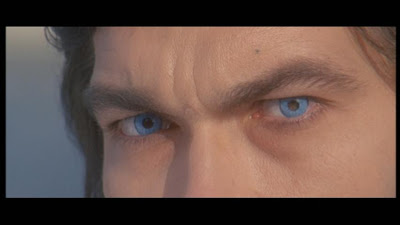 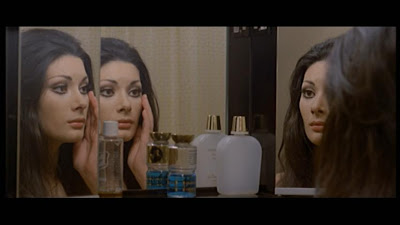 As things get worse, she takes the advice of a new neighbour and attends a "meeting" with some of her "friends". It turns out to be a Black Mass ceremony - but Jane is so desperate she gives in to the leader and his congregation (in what turns into somewhat of a zombie gang bang). Strangely enough, this kind of therapy doesn't exactly cure her...In fact, she begins to see the man with the blue eyes outside her dreams.

The devil worshipping scenes are actually quite creepy and kinda disturbing. It certainly adds to a vague surreal feeling in the movie and you just can't seem to trust anything Jane sees or does anymore. And that's really the most effective thing about the film - you never fully know what may be happening or what just occurred, but from Jane's point of view you can understand why she is freaking out. 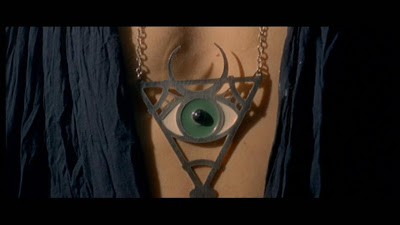 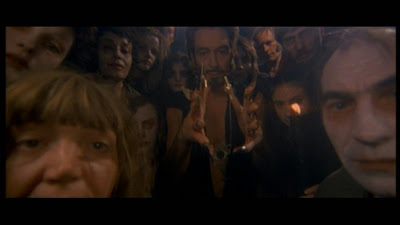 Initially I felt the ending just kinda happened at a random moment. Character speaks a line, film ends...But upon reflecting back on it a bit, that last spoken line seems to feel like the specific character in question has come through the entire set of events and out the other side - now with the ability to let others give help and allow them to see the vulnerabilities. It's actually a perfect way to end the disorienting ride. 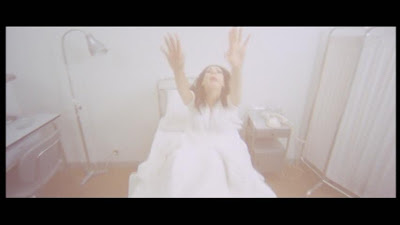 Thanks for the mention Bob!

I really love All the Colors of the Dark. Sergio Martino is one of my favorite Italian thriller/horror directors and this is really one of his best films.

Have you seen Fulci's brilliant Lizard in a Woman's Skin? Martino obviously borrowed a bit from that film to make All the Colors of the Dark, but they're both terrific movies in their own right.

I wish companies were releasing some new giallo films this Halloween. I've been spoiled in recent years by all the great giallo releases, but this year has been rather dry as far as giallo goes.

I was hoping you'd stop by and comment...No, I haven't seen Fulci's film yet, but I have it listed in my looooong list of must sees. I'll bump it up if it's at zip.ca and maybe I can squeeze it into my October "horror" viewing.

Seeing a film like "All The Colors Of The Dark" makes me excited for all the giallo and lesser known films that I still haven't seen.

Bob, your streak of pitch-perfect screen grabs matched to the theme of your posts continues. I must admit that I often limit myself to only the "A" list films in the thriller and horror type genres...I suppose they have just never blown my hair back the way others may. But in watching Inland Empire recently, I realized it's hard not to include a lot of David Lynch's films in the thriller/horror genre and I love his work (to be honest a David Lynch film might be a genre in and of itself). Combine that with your post on All the Colors and I just might have a whole new path to travel. Well done.

I haven't seen Inland Empire as of yet and must admit to being a bit, um, I guess intimidated by its 3 hour length. I do hope to catch up with it though. I'm 50/50 on his films so far, but there always something of interest.

I'm really enjoying digging for some of the lesser known "horror" films - especially from other countries. Indeed some don't necessarily make my hair stand on end, but they may grab in some other way ("All The Colors..." for instance didn't really frighten me, but it was damn entertaining).

By the way, I'm glad to see you posting again at your new site!

I'm glad to be starting over...in the last six months I've moved and changed jobs and at a point this summer just became sick of what I was posting. I decided to scrap the old site and try to start anew. I'm also trying to work out a way to review films for a couple of weekly entertainment publications in my town. We'll see if anything comes of that. Anyway, I'm going to give the new site some effort and start commenting more on fine work like your posts and elsewhere. Keep it up...it motivates the rest of us to contribute!!