For The Love of Film: The Film Preservation Blog-a-thon 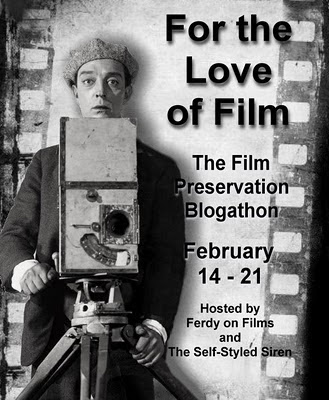 I'm not sure I'll have anything to contribute to the Film Preservation Blog-a-thon that kicked off today, but it really does merit more than just a passing mention.

Co-hosts Marilyn (from Ferdy On Film) and Farran (from Self-Styled Siren) have both been on my blogroll from just about Day One of my own blogging. They've done something special here though - the blog-a-thon they are both sponsoring is not only a celebration of the treasures that have been saved from being lost forever, but also a fundraising event. Specifically for the National Film Preservation Foundation. As the co-hosts state:

The National Film Preservation Foundation is the independent, nonprofit organization created by the U.S. Congress to help save America’s film heritage. They work directly with archives to rescue endangered films that will not survive without public support.

The NFPF will give away 4 DVD sets as thank-you gifts to blogathon donors chosen in a random drawing: Treasures III: Social Issues in American Film, 1900-1934 and Treasures IV: American Avant Garde Film, 1947-1986.

They have more details at their sites (which you NEED to visit) with master lists of the participants so far, but also feel free to just go ahead and donate to the fund. They'd be mighty pleased if you did.

The blog-a-thon runs until February 21. 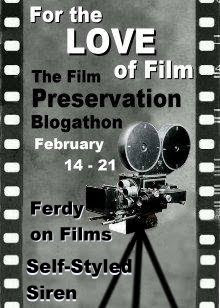 Thanks, Bob, for the publicity. I'm very gratified to see so many film bloggers rallying to our cause and getting the word out.