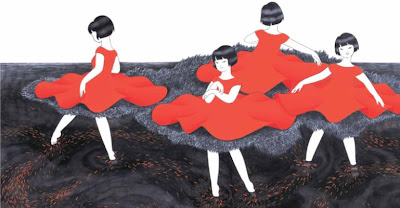 A little over a year ago my friend Chris MaGee was at the 2009 Nippon Connection film festival and emailed myself and a few of the other contributors to the Toronto J-Film Pow-Wow (which he started in 2007) that he had met Jasper Sharp. This was exciting news to me as Jasper was somewhat responsible for my interest in Japanese film - I was already curious when I read the book The Midnight Eye Guide To New Japanese Film (which he co-authored with Tom Mes) and was instantly hooked after diving headlong through the chapters on individual directors like Fukasaku, Suzuki, Kurosawa (Kiyoshi) and Miike. Just in case the title of the book wasn't a dead giveaway, Sharp and Mes co-founded Midnight Eye - one of the premiere web sites for anything related to Japanese film.

Chris had more news in the months to come though. He and Jasper had hatched a plan to start a new film festival - one dedicated to young Japanese filmmakers working independently of studios and who were early in their careers. Even better (at least for me), it would be held in Toronto and Jasper would attend (it really was an honour and a pleasure to meet Jasper last year and to be able to thank him directly). That's how the Shinsedai Cinema Festival was born and last year's premiere outing was, to my mind, a roaring success. Filmmakers attended, press coverage was given and suddenly people were coming to Chris and Jasper.

What to do next? Hold the second annual festival of course! It kicked off this past Thursday (sigh, how good a friend am I that I'm only writing about it now?) with a crowded opening night reception at the Japanese Canadian Cultural Centre packed with local press, film writers, guests, several of the filmmakers and numerous bottles of Asahi Black. Jasper couldn't attend this year, but the crowd was willing to give him some slack due to his new status as a parent to a brand-spanking new bouncing 2 week old son. Among the other guests at the opening was Canadian director Deepa Mehta who caught the evening's first film as well.

I should say the evening's first 2 films since things started with the wonderful 6 minute animated short entitled Ladybird's Requiem by Akino Kondoh. It's essentially a series of small fantasies in a young girl's mind about ladybugs, buttons and the metaphysical which all occur after she has accidentally killed a single ladybug. Kondoh's art also adorns the poster for this year's festival (seen above). Her hand drawn panels are uncluttered and drift and merge together with seamless fluidity. I missed her film from last year's festival and regret that terribly now... 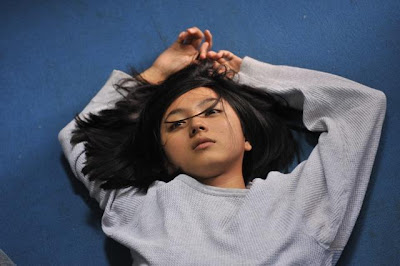 The first feature of the evening was Momoko Ando's full length debut Kakera: A Piece Of Our Life. It's the tale of a young university student named Haru who seems stuck with a selfish boyfriend (he hasn't quite yet got rid of his old girlfriend yet) and is appears to going through the motions of her life joylessly. She's not really stuck with him actually, it's just that it's too much fuss to get rid of him. Until she meets Riko that is. She's a rather forward young woman and simply walks up and introduces herself to Haru because she is interested in her. She claims she isn't necessarily a lesbian as she doesn't care about someone being a man or a woman, just that they are of interest to her and she feels an attraction to them. Haru is somewhat apprehensive, but is also curious and contacts her to see her again. They hit it off first as friends and soon as a couple, but it's still all quite confusing for Haru (played wonderfully by Hikari Mitsushima who was equally fine in Sion Sono's crazily good "Love Exposure") as she tries to deal with her feelings for Riko, her boyfriend's continued presence and a freshman's own attraction to her.

The performances of the two leads and their characters are the strongest part of the film. Riko is pushy and becomes clingy while Haru is frustratingly unable to make any decisions, but there's a charm to the two of them that keeps the story alive. Which is lucky since there are many issues with the rest of the film. The low budget is a bit too readily apparent sometimes, but it's the heavy-handedness of the script and plot points that weighs the whole movie down. Riko is a prosthetics artist (she creates realistic new body parts for people "missing" something) and Haru certainly fits the bill even if all her physical parts are present. The issue with the film's presentation can be summed up in a single scene: while tossing their bottles of soda back and forth during an early "date" they laugh and giggle until one of the bottles is thrown high up in the air, the camera follows it up and as it reaches the crest of its arc it turns into a 2-headed dove.

Though there aren't that many magical occurrences like this in the film (except another beautifully rendered scene of the night sky appearing in a pool), it gives an indication of the subtlety, or lack thereof, at work. However, due to the charms of the characters, I was happy to focus on their progression and not worry so much about getting hit over the head.

I misssed the evenings's second film (a retrospective on master puppeteer Kihachiro Kawamoto via several short films), but was able to catch both of Friday's offerings. The first was Kenji Mizoguchi's 1933 silent film "The Water Magician" complete with a new musical score played live by local band Vowls. The show was magnificent and requires its own post that will follow later. 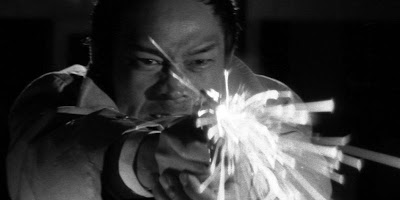 The second film of the evening was described as taking certain stylistic cues from Seijun Suzuki's 1950-60s output as well as Kinji Fukasaku's dynamic street level filmmaking. So as evidenced by my earlier comments, I was obviously looking forward to Island Of Dreams. Director Tetsuichiro Tsuta's debut feature doesn't crib directly from its influences (something that may throw you off initially if you go in with lofty expectations), but certainly has them as antecedents through its tone and approach. The "you're with the action" hand-held camera adds some energy to a plot that doesn't contain quite as much as you might have expected (an eco-terrorist blows up a small cabin in the woods and then sets his sights on larger targets) and bits of humour pop in and out (mostly via detective Terayama who is chasing the bomber). I particularly liked the moment when Terayama is running full tilt down the edge of river in pursuit with blaring high-paced music - until he begins to slow down from being out of shape and the music slows to his own pace.

The Island of Dreams from the title is also the name of a man-made island that is used to hold all the garbage that Tokyo spits out. The bomber - a young disillusioned man named Alan - works daily at the island and has come to hate the consume-and-dispose society that surrounds him. The environmental message is extraordinarily heavy-handed - including a club band's sappy dedicated song to Mother Earth - but given the film's Black and White look (filmed on 16mm) and ancestry, it fit reasonably well and didn't cause the usual rolling of eyes. It also ties in nicely with some magic realism that the film pulls in towards the end in quite lovely fashion. 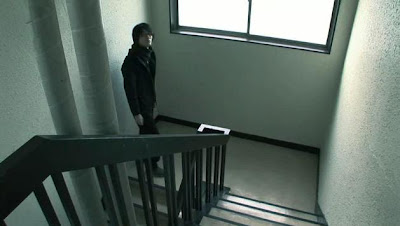 Something new this year is the usage of the Jishu Eiga Room at the JCCC to present several experimental films. Throughout the day several selections are continuously looped, so there were ample opportunities to catch some really new directions. One of these films is Kazuhiro Goshima's hour-long Different Cities - a gorgeous walk through the different corridors and corners of a large city via the eyes of several characters who seem to be out of sync with their surroundings and have lost their ability to navigate them. Whether it's the couple on an expressway with no exits and surrounded by incredibly tall buildings or the woman who follows what appears to be an animal's tracks over, under and through a myriad of different sections, the film takes you through a variety of structures imposed on the city that seem to trap its denizens. And yet, it also shows the beauty of some of this architecture. One sequence of a young man walking through a series of different staircases is quite extraordinary. Goshima seems to have an eye for picking interesting angles and creating perfectly composed frames. It's a lovely work and one of my favourite films of the festival so far.

Another 5 films from the Saturday and Sunday schedule to come...
Posted by Bob Turnbull at 09:07

Email ThisBlogThis!Share to TwitterShare to FacebookShare to Pinterest
Labels: Shinsedai

You sure have a lot of festivals in toronto! i really need to hunt down the bunch which are hidden away in london!

It was great meeting you yesterday!

Yep, we really have an embarrassment of riches when it comes to film festivals. The Japanese Short Film Festival, the Estonian documentary film festival (yes, it's annual), Reel Asian (an excellent fest that is growing in stature every year), Inside Out (the LGBT fest that I unfortunately missed this year), etc.

Sasha, it was great meeting you too! Hope to see you at follow-on meet-ups - it's a great bunch of people and just having met them has surpassed any goal I ever had when I started my blog.

I'm looking forward to diving into your podcast soon.