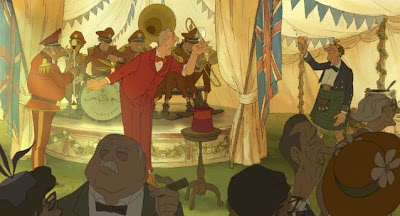 Recently, my ten-year old son has moved away from calling me “Daddy” and started in with the shorter and more to the point “Dad”. I’ve been having mixed feelings about this – while it’s great to see him mature and push his boundaries a bit towards his upcoming teenage years, it’s also kind of sad to see a few more of the remaining traces of my little boy evaporate in front of my eyes. Oh sure, the occasional “Daddy” still slips out every so often, but he’s made the turn. It’s just one of many changes that any child goes through as they mature and yet another point where the parents can reflect on what’s slipped away while also being excited about what’s ahead. It’s pretty much a perfect example of the word bittersweet.

Change that evolves (as opposed to change that is designed) is like that. You can see the reasons for it occurring, but sometimes that doesn’t ease the pain of losing what was there. Take, for example, the circumstances facing an old time magician caught in a fast changing modern world as shown in The Illusionist. Sylvain Chomet’s most recent exercise in beautifully hand-drawn animation, depicts the wonderful subtlety and gentle wonder of the old art form of a travelling stage magician. He performs sleight of hand tricks, pulls small props out of nowhere and, yes, even a rabbit out of a hat (one particularly grumpy rabbit), but he does this to small apathetic crowds. It’s getting tougher and tougher for him to eke out a living so when he gets offered a job in the Northern region of Scotland he takes it. The simple rural existence of the pub patrons allows for an appreciation of his craft and there’s no cynical pointing to what’s up his sleeve or seen-it-all-before attitude anywhere in his new audience. In particular, a young girl working at the pub is enthralled with his act and ends up following him back to the big city. She literally believes he can do magic. 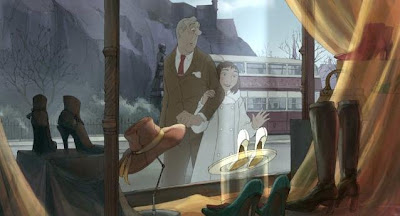 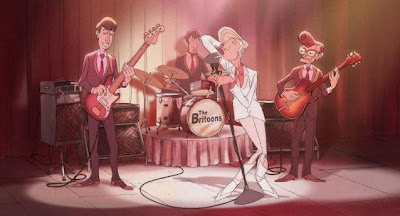 Chomet’s film is based on an old, never-filmed story by master French filmmaker Jacques Tati and you’d be hard pressed to find a better match. Chomet’s previous full length animated film The Triplets Of Belleville was filled with small sight gags, strange contraptions and nary a word of dialogue. If you’ve seen any of Tati’s most famous films (Mr. Hulot’s Vacation, Mon Oncle, Playtime – all starring himself as the tall and gangly Mr. Hulot), you’ll note that there’s a kindred spirit between them. The Illusionist tells its tale without a single crucial spoken word. There are plenty of utterances and background chatter from the assembled characters, but the entire story in all its fine detail is told via character actions and voices are relegated to being part of the sound field (a field that is filled with clanking mechanical sounds – especially once they are in an urban setting). As the young girl slowly becomes a young lady and begins to experience the big city – its attitudes, its temptations and its huge spectrum of choices – she begins to lose that childlike wonderment in his magic. There is a deep sadness to the film at times – not just because of the loss of youth and innocence of this country girl, but due to the way it acts as a eulogy of sorts to the “good old days” of simple entertainment. It’s more like straight up bitterness at times as it laments a time when audiences could gain entertainment and appreciation from watching skilled performers dedicated to their craft and not someone who panders or who is all flash and dazzle. A fine example of the latter is the lead singer of Billy Boy & The Britoons – a band of floppy haired musicians with screaming fans and an abundance of cool. Billy is the new style of entertainment and is the big draw to one of the early theatres the magician plays. Once Billy and the band are done though, the crowd disappears leaving a lone old woman and her grandson to watch the magic show.

Despite all this, the film is filled to the brim with humour and wonderful moments. The secondary characters like Billy, the drunken Scot who brings the magician to his pub, the three acrobats who seem to move only in tumbling and somersault motions and even the cranky rabbit all bring a great deal to their scenes – even if they’re only in the background. There’s a wealth of small gestures and repeated little gags that begin to work on you so that the laughs come more and more easily as the film goes along (Chomet also throws in some tributes including an old Buster Keaton gag and a visit to a movie theatre that’s playing Mon Oncle). It also doesn’t hurt that the 2D animation is glorious. Whether it’s a car rolling through the streets of Edinburgh or a cluster of clouds rolling over the Scottish countryside, the warmth and detail of every frame wraps around you and tucks you in. Even in some of the more poignant moments of the film, I couldn’t help but smile broadly. Towards the story’s end, the sweetness of so much that has happened has garnered a very bitter taste – the blossoming young girl begins her city life, but the magician begins to lose his faith in his own ability to create wonder for new eyes.

Not to worry though, as long as we have movies like The Illusionist, we’ll always have a little bit of magic around. A beautiful, touching film. 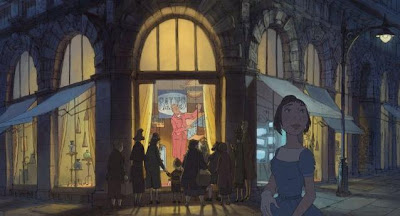 This is beautifully written, Bob. I enjoyed the personal background too.

I'm very much looking forward to seeing this soon (out on DVD in a couple of weeks) being a fan of Tati's (especially PLAYTIME) and of Chomet's animation style (if not always his films as a whole).

A friend just suggested the Mr. Hulot films to me but I haven't gotten around to watching them. I've also been hearing such great things about this one and didn't realize there was a connection.

It certainly looks wonderful and sounds great so I'll make sure to give it a look.

Thanks for the kind comment Stephen...I expect that you'll like the film if you like both Tati and Chomet's style. I can see someone not being a big fan of Triplets Of Belleville but still very much enjoying The Illusionist.

Dave, you're going tomorrow night? Hmmm, not sure I can swing it...Rats.

Hi Will...I'd be very curious what you think of The Illusionist if you go in without any Tati knowledge beforehand - it's definitely not necessary by any means, but I'd be curious if you get a similar reaction to the film. I'd also love to hear what you think of Tati's films - I can see why not everyone loves them as the humour is not laugh-out loud funny for the most part, but the creativity and care put into them is remarkable.