Ghost Rider: No Spirit At All 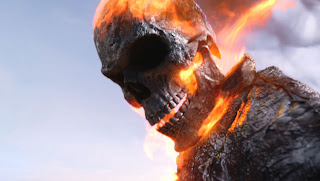 It's not that Ghost Rider: Spirit Of Vengeance is completely terrible. No, I've seen plenty of films that lack basic competency and have far less focus than the burning biker's second foray into the multiplex. It's that it ISN'T completely terrible - had it been worse it may have kept my attention. An occasional head-slappingly bad film (not something I typically search out) can be awfully fun and certainly more memorable than the generic. Even better would have been an embrace of the campy potential on hand and a determination to push it to the limit. After all, the dude's skull is on fire and a solid Nic Cage freak-out or two is always good tonic for the soul. Sadly, the film just doesn't capitalize on these factors enough.

Ghost Rider's central problem is that it just sits there allowing it's drab blue/grey surroundings to fill up your vision for about 90 minutes until you can go back to the full spectrum of reality. It's completely inconsequential.

So why am I bothering to write about it? Well, I'm somewhat bewildered by films like this. With all the effort that goes into the production of a movie - especially an effects heavy beast like this one - why is there sometimes so little care put towards making it artful? Either from the point of view of the story (a true yawner here) or the visual components? There's absolutely nothing I can take away from this film in regards to character or story - nothing. I'll give some credit in regards to the flaming skull and the blasts of fire that provide the only respite from the surrounding blandness, but that was it and it wasn't much. I typically try to avoid fare of this nature, but a night out with some buddies for beer, a movie and more beer was not to be dismissed.

Perhaps I'm overstating my case. My friends had a lot of fun with it and several reviews and Twitter comments seem to be saying the same thing. Maybe I filtered out all the goofiness...But coming out of the theatre - when I generally want to talk about what I just saw - my thoughts were solely on that next pint.
Posted by Bob Turnbull at 09:57