Blind Spot - "The Reckless Moment" & "This Gun For Hire" 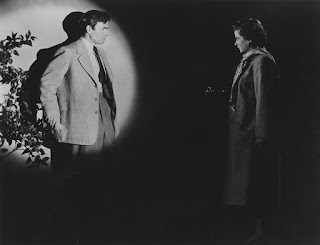 I haven't been on a Film Noir bender in awhile and it's damn well due. So for my opening salvo in the 2013 Blind Spots, I grabbed a pair of Noirs that I not only felt I should have seen by now, but that I just simply wanted to see right now. I expect from a more mainstream perspective, these two films weren't exactly gaping holes in my cinematic knowledge, but I've been yearning (yes, I said yearning) to see them both. The additional push is that The Reckless Moment is directed by Max Ophuls and he's a director that I'd like to dig into this year. My only experience with him is the lovely Letter From An Unknown Woman and I've cobbled together 3 or 4 of his films on the PVR (oh TCM...you give and you give...), so I'm keen to see more of that constantly moving camera of his. By the way, both of these movies were watched via the PVR, but my capture card is providing horrible resolution on Windows 7 so I've borrowed these screenshots from other sites...

Once Noir gets a hold of you, it's hard to shake. Like an addictive drug, Noir just leads to more Noir. I'm overstating of course, but Noir's ever-present feeling of doom, its creeping hand of fate and its shafts of light painted with purpose across every inch of the frame lures me in every single time. Even the "lesser" Noirs manage to ensnare me. Not that every Noir is the same, but they share certain characteristics of style tone and theme. Indeed, both The Reckless Moment from 1949 and the earlier by 7 years This Gun For Hire share stylistic touches as well as central male characters who float through their dark lives. Both of these men end up glimpsing some possible redemption through the eyes of a woman (these ladies are not your typical femme fatales even though they may be the "cause" of the male's downfall) as they accept the fate they always knew was approaching. 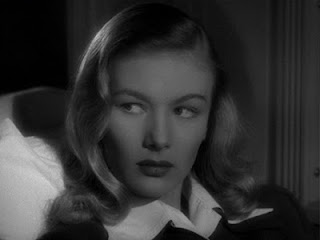 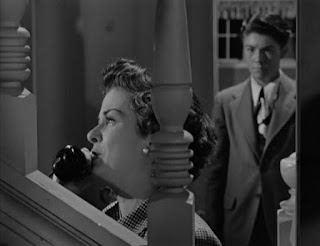 Ophuls' The Reckless Moment is easily the stronger overall picture - in craft, consistency and storytelling it shows a greater command of filmmaking. Even though it has a very melodramatic style with a highly arched main performance by the lovely Joan Bennett, it still manages to sneak in many subtle aspects of Noir such as shadows that creep into the house or stair banisters that suddenly feel like they're jail cell bars. Bennett plays a housewife named Lucia whose husband is away from home for long stretches due to work (after having been away for several years with the army) and even though she's doing just fine thank you very much, you're given the feeling that she's on the verge of breaking down and needs her man back at her side ("There's nothing wrong that Tom's coming home won't cure"). This goes doubly so whenever she deals with her fractious 17 year-old daughter Bea. She tries the strict and stern route to match with her harsh looking glasses, but it's just an open invitation to an already rebellious teenager to do exactly what she doesn't want her to do. For example, despite her warnings, Bea meets up with a seedy older man named Darby in the family's boathouse one night (Lucia had tried convincing Darby to leave her daughter alone, but that too failed). After displaying his true colours to Bea, an argument ensues followed by a tussle, a whack on the head and a tumble off the balcony. Bea runs off and the next morning Lucia finds him on the beach dead (always be careful of poorly stored anchors). She goes into protective mode and covers things up as best she can, but it's never that easy is it? Initially the story has you wondering if she has made the situation worse by covering it up and focuses on whether she'll get away with it or perhaps take the blame for it herself. Has her over-protective style put the family in jeopardy? I worried a bit initially that it might turn into a cautionary tale about happens when a woman tries to be strong and take charge of her family (as many women were now engaged in the workforce post-war), but fortunately Lucia's strong determination put those fears to rest. However, she soon has more than just the police to worry about as a man named Donnelly (James Mason) drops on her doorstep. He's in possession of some letters that Bea wrote to Darby (initially held as collateral for a debt Darby had) that appear to now hold a higher value due to their potential to cast suspicion on Bea. Mason conveys a message from his boss that "We want to liquidate our stock while the market is high", so now Lucia is forced to consider paying for the return of the letters to keep away any additional police snooping. 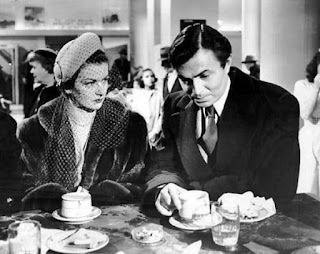 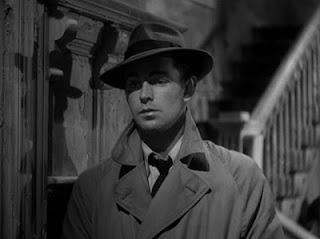 In comparison, This Gun For Hire gives off a straight ahead B-movie vibe. It starts off with a strong portrait of the titular character - a hired killer who is gentle with stray cats, but has little feeling for the people around him. He's been given his assignment details, carries out the task with a small wry smile on his face and even dispassionately dispatches his victim's "secretary" who wasn't supposed to be there ("they said he would be alone"). It's an effective scene with tension built through her unexpected presence, a kettle's whistle and a young girl who sees the killer while playing on the stairs. Alan Ladd is almost too handsome to play this killer named Raven, but he pulls the loner hired gun off quite well. One notable scene has him answer his contact's meek question "how do you feel when you do...this?" (pointing to a newspaper headline about the killing) with a short to the point "I feel fine". But after that sharp beginning, there's a let down as the story sets itself up. There's simply nothing overly special to indicate it will dazzle with its style or its substance - unless, that is, you count the presence of Veronica Lake. She was born to dazzle. It's not just her gorgeous looks or that trademark swooping hairstyle, but her voice is just tailor-made for Noir. Unfortunately, her pipes aren't given much of a workout on her less-than-snappy dialogue. However, she is given a chance to sing (or rather, lip-sync) as she warbles through a couple of tunes while doing magic acts at a club. Both performances are terribly cheesy - one of them including goldfish and a fishing rod - but Lake confidently works her way through them. And no one has ever looked as good wearing a fisherman's hat. The club is owned by Gates, the man who most recently hired Raven, and he's involved in a complicated scheme to steal chemical secrets and sell them to enemies of the state (in this case Japan - they would use the poison in bombs to deliver "Japanese breakfast food for America"). Lake's character Ellen is asked to do some undercover work while she works at Gates' club (the government suspects him) and being a good old fashioned American girl, she agrees to help out her country. Meanwhile her detective boyfriend is looking into the recent double murder while Gates is trying to double cross Raven. But a coincidental meeting between Ellen and Raven on a train leads Gates to believe they are in cahoots. Along with stirring the plot's pot, the scene on the train provides another example of Ellen's kindness as she offers Raven a dollar even after she catches him stealing $5 from her purse. It plants an early seed with Raven that perhaps not all of humanity is rotten. 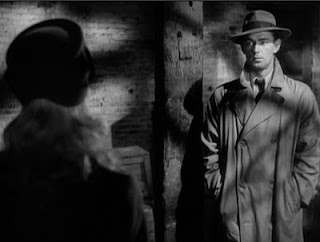 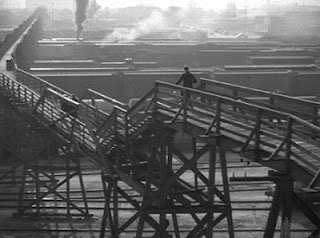 The plot of This Gun For Hire has too many coincidences and stalls somewhat, but it's still mostly an entertaining ride (if only for this early 40's gem of a line directed at Ellen from her boyfriend: "Oh Sugar, what does it take to get you to darn my socks, cook my corned beef and cabbage and confine your magic to one place and one customer?"). It's not until its final half hour, though, that the Noir style really starts to make more of an impact - a thundering one in fact as it kicks off with a lighting strike. It's almost like that bolt has scared the movie awake as it jitters and jumps its way through the shadows and winds its way from the dark rooms of a mansion to a refinery and a sewer system. Raven and Ellen are chased as flashlights slash across the screen and it dawns on him that the woman he is dragging around is the only person that has stayed true to him (she didn't rat him out to the cops). He watches her tend to him as he did to his cat and he allows himself to be convinced to mend his ways...In The Reckless Moment, Lucia has a similar effect on Donnelly. He too works for a ruthless boss and has developed an uncaring view of the state of the world, but Lucia starts to have an effect on him. He's obviously smitten (Joan Bennett is perhaps less immediately sensual than Lake, but no less beautiful) and tells her "I never even did a decent thing in all my life. I never even wanted to until you came along". The story has more fun with its plot elements by shifting where the tension lies: Will she get away with the cover-up? Will she or Bea become suspects? Will Donnelly's boss come after the money? Now that an innocent person is involved, will she try to save them? Though you can sense where the fates will have a hand in the ending, you're never sure how they will get there due to the different paths the story navigates. In a similar fashion, Ophuls' camera is equally restless as it follows people up and down staircases (spinning around them as they climb or hovering on their shoulder as they descend), tracks them along the street or barges in through a window. Along with timely uses of shadowplay and some scenes of overlapping dialogue (Scorsese and Altman must have been acolytes), the film very effectively uses all these stylistic touches to keep the nerves a bit more frayed throughout. 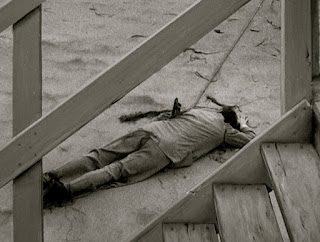 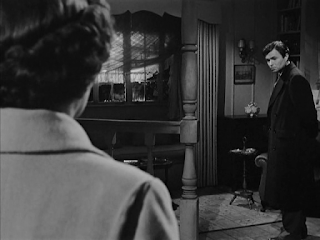 Both films use an anti-femme fatale to help their longtime male criminals find some redemption after having given up on humanity. In both cases, of course, there is a cost. Each of the criminals is quiet, a loner and very intelligent (Raven improvises numerous times while Donnelly tries out several plans to help Lucia), but fate dealt them a bad hand early on and has come for its due. The films certainly depart a bit from each other with their approaches to story and style, but the Noir characteristics are prevalent and help reinforce the doomed nature of both men. Max Ophuls' stamp is imprinted far more deeply upon The Reckless Moment than the one by unsung Frank Tuttle on This Gun For Hire, but both use their conventions wisely and create mood and tension (This Gun For Hire just decides to save a lot of it up until its conclusion). If neither may ever crack the pantheon of film, watching both back to back has most definitely whetted my appetite for more Noir. Is there a cure for that? Yes, and it's more Noir. 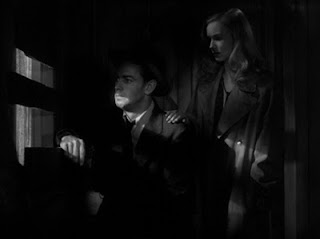