Blindspot - "Phantom Of The Opera" & "Creature From The Black Lagoon" 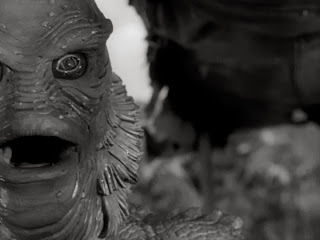 It's odd to think that two vastly different films with 30 years between them could both be lumped together under the same generic genre banner. But that's what happens when you start classifying anything old as "classic" - like, for example, the 1924 silent feature The Phantom Of The Opera and the mid-50s monster flick Creature From The Black Lagoon both being labelled as Classic Horror. The fact that the technical tools available to the filmmakers were worlds apart and their aims were very different don't seem to matter. If it wasn't for alphabetical order, you'd find them side by side on a video store shelf. 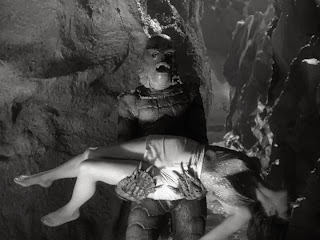 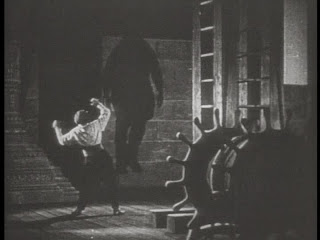 Of course, both films are even further removed from modern day fare. Some might claim they suffer for that, but it really does depend what you want from a horror film. Do either of these films shock or scare you? Likely not in an immediate, jump out of your seat kind of way (though the iconic reveal of the Phantom's face can still unsettle), but that's not necessarily the only thing horror can do to you. There's something chilling about the idea of unseen monsters living in a foreign environment right under your feet which could - at a moment's notice and through no fault of your own - rise up and destroy your life. As well, both films provide haunting images of their monsters in close-up that can leave rather disconcerting feelings within you (put the dead-looking eyes of the Creature alongside the contorted, deformed face of the Phantom and your sleep may be interrupted tonight). The jump scares are few and far between, but good horror leaves an impression, not just a brief quickening of the heartbeat due to the crash of sound and image. So the two films do have a good deal in common I guess. 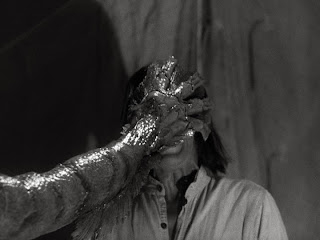 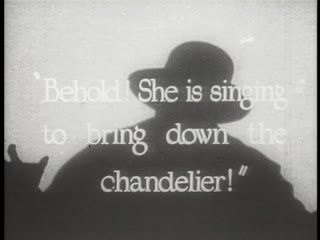 Even the plots contain some overlap as each film has its own secretive "monster" that lurks below the surface and only fights back against the populace above when he is threatened (or when the woman of his choosing is denied him). The Phantom, of course, is well known from stage, screen and just about every other medium - even most of the characters in the movie have heard about him from the very beginning of the story. Everyone seems to know about the rumours of a ghost at the Paris Opera House and that it may somehow be related to the mysterious and cloaked figure who owns box number 5. Everyone, that is, except the new owners. They get acquainted with him rather quickly, though, as several events happen in rapid succession: they see a cloaked man disappear suddenly from his box seat, the ballet dancers see a shadowy figure as they run off stage and the Prima Donna singer Carlotta gets a note ordering her not to perform the following night. In regards to that last occurrence, the Phantom wants Christine to play the role of Marguerite instead and though Carlotta and her mother put up a good fight and refuse to be insulted in such fashion, when show time rolls around the marquee singer seems to have fallen ill. Christine gets the spotlight and The Phantom later pledges to her (through the walls of her dressing room) that he will impart all of his art to her, but she must renounce all her possessions until the day when he will show her his form. Her current boyfriend Raoul is none too pleased at these developments, but Christine tells him that she cannot ever leave the Opera House and it would be best for him to forget her. As if to underscore this, the next night Carlotta decides to sing and The Phantom follows through with his threats. A great chandelier crashes down upon the audience below causing mass pandemonium. In the aftermath, he pulls Christine to the other side of the mirror and down deep into the caverns below... 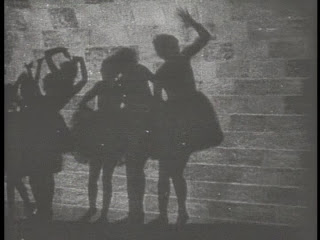 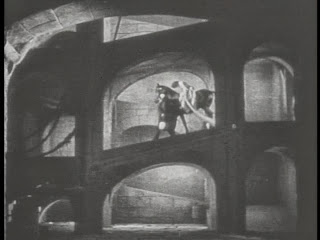 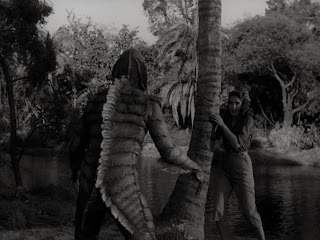 Those dark depths are the domain of the Phantom, just as below the surface of the murky water of the Amazon is the territory of the Creature from the Black Lagoon. He's (It's?) been happy to stay hidden there lo these many years, but as an expedition returns to his particular corner of the river (after finding some fossil remains of large webbed hands), he begins to feel threatened. The expedition is on alert after returning to base camp to find two of the team dead, but they push onwards. The administrative director of the expedition is concerned mostly about finding something - anything - to avoid being labelled a failure, while the remainder of the crew (apart from the captain of the boat) are scientific staff interested in finding and studying the beast. David is the head of the science expedition and he and the director are at loggerheads for most of the film - not just because of their different approaches to the expedition ("You don't sound like a scientist, you sound like a big game hunter out for the kill"), but because they both have eyes for the only woman on the trip. Kay is already David's girl, but director Mark makes it known to her with the occasional creepy remark that he wouldn't be overly upset if David were to disappear and he be left alone with her. Once the creature sees Kay swimming in the water, though, this triangle expands into a quadrilateral. With Kay often left on her own since David and the crew have qualms about "going into unexplored territory with a woman...", the creature actually has several chances at stealing her away. The story from here doesn't so much progress as it repeats a common cycle: attempt to catch and study the creature then fail. The creature, for his part, tries several times to get onboard the ship and finally succeeds at capturing Kay and bringing her to his secret grotto. However, the paralyzing drug they been using to try to capture him finally takes hold and they rescue Kay while finally caging the beast. That doesn't last long and they go back to the cycle of cat and mouse. 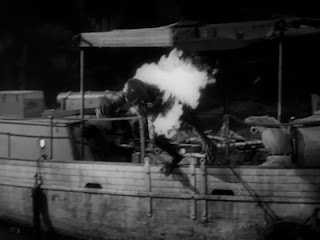 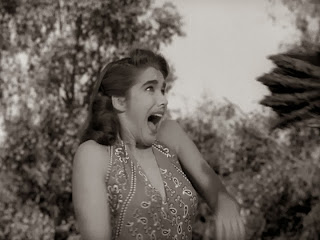 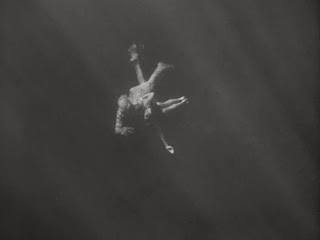 In many ways Creature Of The Black Lagoon is a run of the mill 50s sci-fi/horror - impulsive characters doing stupid things, women present only for the sake of being rescued and to have men fight over them, and action being driven simply because the plot requires it. However, it differs in several key ways that firmly place it in the realm of "classic horror". First and foremost is the quite spectacular underwater footage that 60 some years later still looks impressive and must have been very difficult to capture at the time. It's not just the frequency or the realism of seeing the beast and the crew swim around the lagoon, but director Jack Arnold (It Came From Outer Space, This Island Earth, Tarantula, The Incredible Shrinking Man, etc.) gets creative by having the camera follow alongside the swimmers, film over top of them, from below and by playing with the light streaming through the water. This leads to some wonderful shots and, when both man and beast are in the water at the same time, provides actual suspense. As much as I enjoy a great deal of the 50s films from this genre, there are rarely moments as tense as some of these underwater sequences. Arnold keeps the film moving at a decent clip and even though it has a tendency to fall back on standard tropes of the genre and times (such as later in the movie when the beast blocks the boat's path and one of the crew tells Kay to go lock herself in her room to be safe...), as a whole, it's a pretty damn effective monster flick. Even within those restrictions, it plays with the alpha male competition between David and Mark (though never quite allows Kay to do much), appears to be a solid proponent of evolution and its role in helping to foster this strange mix of fish and man (an early montage shows the beginnings of life in water), and consistently uses music very well (blaring horns dominating when the creature pops up from behind a rock while strings help along the creepier sections). 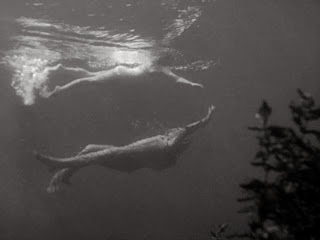 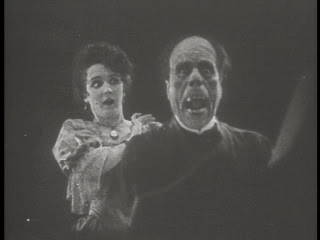 The Phantom, of course, can't readily fall back upon genre characteristics or shortcuts since they were still developing at the time. It does make use of some expressionistic filming which provides some gorgeous use of shadows (even in the relatively crappy DVD version I watched), but otherwise it has to figure out its own path to the creation of an eerie environment designed to frighten its audience. The strategy is focused very much on mood - using shadows, set design, makeup and acting as the tools. As mentioned earlier, that reveal of the phantom's face just after Christine removes his mask has easily made its way to the list of all time horror movie moments and still has the power to shock. Lon Chaney must be given the lion's share of the credit as he created the phantom's horrific features solely from twisting his own face and using makeup that he took great pains to do himself. He's the star of the show, but certainly has to share the stage with those rather stunning sets that stand in for the sewers and dungeon pathways under the opera house. There are several trips through the passageways throughout the movie and numerous times you find yourself hoping that the plot holds off just a bit longer before intruding upon the surreal visions on screen. Adding further to these images is the Bal Masque D'Opera scene - a yearly event where all classes in Paris mingle in costumes and masks and is the only portion of the film with colour. While the revellers are in hues of pink and purple, the phantom stands out in glowing red (on my DVD copy it was more like magenta, but it's obvious how much he contrasts with the rest of the partygoers). At this point Christine has betrayed him, so his costume of the Red Death is highly appropriate. Having previously uttered sentences such as "If I am the Phantom, it is because man's hatred has made me so" and "Feast your eyes - glut your soul, on my accursed ugliness", this is not a guy who is going to be terribly open to second chances and excuses. He has learned of Christine and Raoul's plan to run away and snatches her after the next performance of Faust from the stage. The Phantom has desired Christine's love in order to redeem him ("so that which is good within me, aroused by your purity, might plead for your love"), but now that he sees her as having betrayed him he becomes desperate. Raoul gives chase into the tunnels (along with the French secret police and eventually a mob) and sets up the finale which also turns into a bit of cat and mouse suspense. 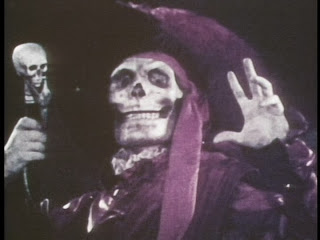 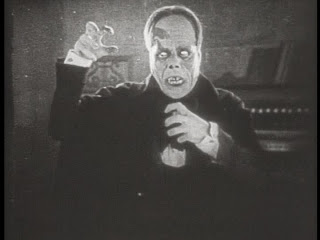 Though Phantom Of The Opera is undoubtedly one of the more original and long-lasting documents of horror filmmaking, both films have influenced (in different ways) and entertained countless fans and aficionados over the years and easily deserve their reputations as being classics. Horror or otherwise. 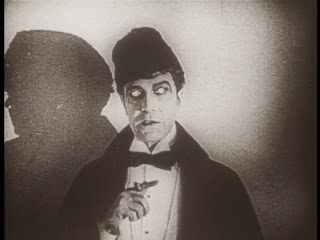