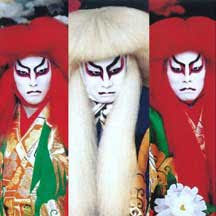 
One of the great things about watching "World Cinema" is the window you get to open on other country's cultures. You likely won't learn all the ins and outs of the people, politics and religions of the planet, but you will likely find aspects of these cultures that intrigue you and encourage you to investigate them further. Kabuki theatre is one such example. Like many non-Japanese people, I had heard of it but never really had a good idea what it really was - until I began watching Japanese films. The beauty of the costumes, the smooth and precise mannerisms of the dancers and the reverence given to these actors has made me curious to better understand the art form. The Cinema Kabuki Festival (running from November 11-15 at the Scotiabank Theatres here in Toronto) is primed to treat many of us to entire Kabuki presentations on the big screen and further whet our appetites.

One of the films being screened is the captured performance of "Triple Lion Dance" from a 2007 show at Tokyo's Shimbashi Embujo Theatre (the Canadian premiere of this film is Nov. 14th at 1:00PM). There's nothing fancy about the presentation here - a theatre, a stage, a backdrop and the actors and musicians. Place numerous HD cameras around the environment, don't get in the way and make sure the dance and its actors remain the focus. It's to director Yoji Yamada's credit ("Twilight Samurai", "The Hidden Blade") that he indeed does all of this and ensures that the end result is not overly edited or manipulated to take anything away from the play. The colours are vibrant, the sound is sharp and clear and the performance is quite extraordinary. I'm a novice at Kabuki, so I can't give a detailed review or comparison to other performances, but I'm sticking with the term extraordinary. Even though this can be a very slow, methodical art form, everything flies by in what seems to be about half the 55 minute run time. It's likely due to the play being broken up into three distinct sections: 1) the introduction to the shishi (protectors of the stone bridge which leads to Buddhist monk Monju's paradise), 2) the comic middle act of two rival faction Buddhist priests wandering through the mountains in search of the bridge and 3) the final dance of the shishi among the peonies showing off their strength. 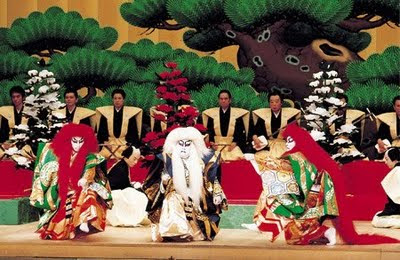 The Lion Dance in Kabuki is usually between a father and son character, but in this particular telling, the legendary performer Kanzaburo is joined by his own two sons (Kantaro and Shichinosuke) to expand the tale to three lions. The story itself is actually based off a classical Noh play called "Shakkyo" (or "The Stone Bridge"). Opening with the musicians playing their shamisen (three stringed instruments akin to banjos and plucked with large picks called bachi) and the singers expanding on the background of the story, the dancers begin to tell their tale. The singers help of course, but the body movements, gestures and facial expressions take care of most of the storytelling by themselves. The occasional booming and echoing stomps on the stage by the dancers feel like exclamation points tacked on after a particularly important or emotional moment. The costumes are remarkable - beginning with shishi masks in the first section and ending with full outfits complete with flowing manes as befitting the stature of these lion guards. While almost floating through the play at times, it's easy to see that the dancers/actors have an amazing ability to control their movements; especially when they jump up in the air. This isn't a Hollywood style dance movie by any stretch, but these actors are as aware of their body's every move as much as Fred Astaire ever was. Meanwhile, onscreen text tells the viewer some background of the play as well as translating most of the singing. The first act is primarily concerned with the father shishi testing his sons' strength by repeatedly throwing them off the mountain. This allows for some wonderfully creative interactions between the three of them.

Though the comedy of the middle section is a bit broad for my taste (via character facial expressions and vocal intonations), it's never boring and does make fun of the idea of rival Buddhist monks. The flute and percussion music that opens the third act sets a dark tone and derives from the Noh style. The shamisen take over again to bring the feeling back to the stylized kabuki staging and pacing. Peony blossoms adorn the stage as the three shishi begin to parade their strength as they protect the bridge and prevent any humans from passing. The long twirling manes of these kings of all animals should be enough to warn off any travelers and the performance appropriately ends as the shishi finish off their display. Extraordinary. My appetite has grown. 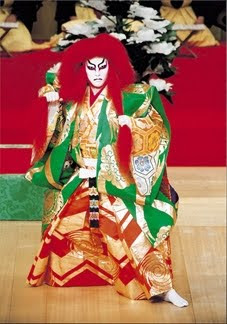 Congratulations for the wonderful post! I thank you specially by the serious and accurate analysis about the Renjishi - it helped me so much. Greetings from Brazil!