Another blogger babbles a bit about "Tree Of Life" 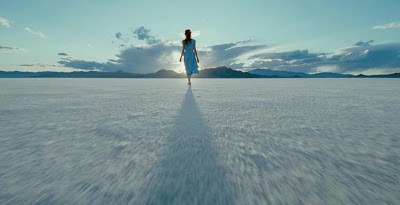 Does the film blogging world really need yet another post from someone who finds "The Tree Of Life" both confounding and enthralling and can't quite put their thoughts into cohesive words yet? No, it certainly doesn't. But why should that stop me? Do make sure you read Matt Zoller Seitz's article though - it's terrific. Meanwhile, some random thoughts:

I'm very much looking forward to another viewing. If it doesn't all become crystal clear for me (which I don't really expect nor want), at least I can revel in the wonderful combination of images and music and let the film stir my own recollections.
Posted by Bob Turnbull at 09:38

Just read the article...that was pretty damn good and that does explain the 2001 shots, Trumbell borrowed from himself!

Love this movie and good write up. How do you feel about the rumor that we may be getting a 6 hour version some day.

Thanks for the article, and inspiring that thought in me.

Thanks for the comments!

Dave, yeah I stole the "waves" idea from Aaron, but I don't think it's a unique perception...B-) I don't think I'll be getting back out to see this for a couple of weeks - I hope it sticks around somewhere that long...

Mike, my initial feeling about the 6 hour cut is that we'll never see it. However, if it did exist, I would definitely want to experience it - not sure if I would want to catch it all in one go, but I was never bored once in the 2 hour 18 minute version (even if I didn't completely connect with the characters). Visuals of that nature usually keep me in rapt attention. As wonderful as it would be to see more of that footage, though, I'm not sure how much more he could add to the themes and feeling of the current film - it's already so well positioned to evoke (there's that word again) individual thoughts and feelings. I actually think a shorter cut would be more effective in some ways. But I'd still see that 6 hours...B-)

Yojimbo, I like your point about reconnection through spirit. Though I'm not a religious person by any stretch, I love how Malick brings in the spiritual without necessarily tieing it directly to religion or even God. It kind of feels like he was searching for his own interpretation of spirituality or God as he was searching for his film (which may explain him even considering a 6 hour cut - maybe that would be a good thing...).