One Of Those Scenes - "Our Hospitality" 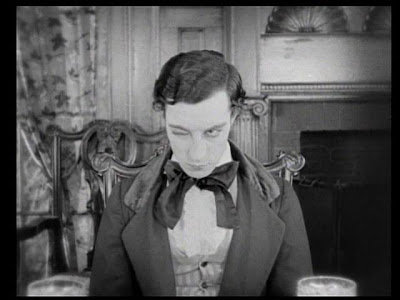 Buster Keaton has always been famous for his daring stunts and his deadpan face. Rarely does he break expression as he tumbles down mountainsides, fights vicious storms or survives buildings crashing around him. One of his best stunts occurs near the end of his classic "Our Hospitality" - as his beloved floats uncontrollably towards a huge waterfall and certain death, he ties himself to an overhanging log and swings out to catch the falling body as it plummets over the edge of roaring water. It may only be a dummy that takes the plunge over the edge, but that's Keaton arcing out like a pendulum to catch it while swallowing torrents of water. It's a fantastic scene that provides an exciting climax and is possibly even more remarkable in its execution today than almost 90 years ago when he performed it. There's no editing out of safety wires or harnesses here - just a basic knowledge of physics and a great deal of nerve.

As great as it is, though, my favourite moment in the film comes much earlier and shows off one of Keaton's other comedic skills - his impeccable timing. Unaware of a long-standing family feud (similar to a Hatfield/McCoy battle), Willie Mckay returns to his family home for the first time in decades. There he meets a young woman who just happens to be a member of his family's rivals and she invites him over to dinner. The menfolk of her family are, of course, aghast when he arrives, but since they are hospitable southern gentlemen, they would never kill him inside their house. So they wait until he must eventually leave. Willie realizes this and stalls his departure - which also gives him more time with his new girl.

As he watches her play the piano, he becomes aware of the baleful glares of his hopeful executioners. For a full 10 seconds, he tries to appear unfazed by looking for a natural relaxed mode, but continues to shift positions, trying folded arms then leaning against the wall then hands in pockets, but never quite doing any of them before changing his mind and trying something else. It's a wonderful little piece of funny business that shows his awkwardness and nervousness at the situation - while never letting his expression change.

Here's the scene in question:

Good picks. This is one of my favorite Keaton films. I also liked the little bit with the tall hat in the carriage, which eventually gets switched to his famliar porkpie hat.

Love that scene too...This was the one that made me laugh loud and long though.