Blind Spot #8 - "The Searchers" and "Stagecoach" 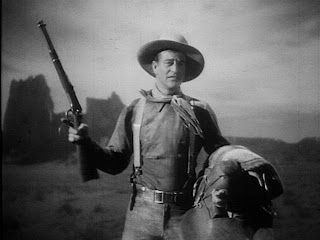 The Searchers was already on my Blind Spot list (one of the first I picked last year actually) before it was slotted into the number 7 position in the recently published Sight And Sound Poll. However, since it was the only member of the Top 10 list that I hadn't yet seen, I will admit that I moved its viewing date up a few months. It just seemed the right thing to do...And I do have an excuse for not having seen it before, though it's essentially the same one I previously had with Casablanca: I've read so much about it and seen so many clips that I felt I already knew the story. Granted, once I finally saw Casablanca and realized how extraordinarily great it was, I probably should have discarded that excuse for any and all movies. Slowly, but surely, I'll get there.

I had no excuse for avoiding Stagecoach, though, apart from some stupid thought in my head that a Western from the 30s would be slight and low on excitement. It's funny how expectations can so easily be shattered, isn't it? Stagecoach - John Ford's kickstart to the Western genre from 1939 - is a wonderful blast of fresh air, moving at an entertaining clip while setting bars for action photography that would remain for years to come. Meanwhile The Searchers was both more and less than what I expected: a post-doc course on how to frame scenes and actors through scintillating visuals and with a cast that contains nary a single cliche or unflawed character, but also with a tendency to undercut its power with broad humour and acting choices. 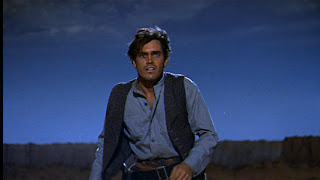 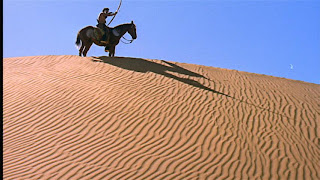 I should tread carefully here though - Ford's flip of the standard conventions of a Western is deserving of its place in film history if only for its anti-hero Ethan Edwards. John Wayne's portrayal of Ethan doesn't allow for much warmth (except for an early scene with his two young nieces who shortly thereafter get kidnapped by Indians) since his racist ideas don't take much effort to tease out. Short of that tender moment with the kids, Edwards' only moments of happiness seem to be at the expense of others and its a wonder why we stay with him on his travels. To top if off, during his journey to find the young girls, his main companion Martin (who was taken in by Edwards' brother and wife when young and who has some Indian blood in his heritage) comes across as dim of wit and void of personality - which makes his scenes with the lovely Laurie a bit hard to understand and even harder to watch when bits of slapstick are thrown in. Moments like that plus the every utterance of the dopey and dense Mose Harper (one of the set of deputees a U.S. Marshall has in tow) pull the film back from the dark waters it so clearly should be wading into deeper. For every time Ethan loses control (shooting the eyes out of a dead Indian or firing randomly into a herd of buffalo to diminish the amount of food for the Indian tribes) or a body is found under one of the tombstone like rock formations in Monument Valley or the burned out shell of a home is examined, it feels like there's an attempt to reassure the audience that there's still fun to be had in the old West. To me, it continually reset Ethan's despair, loneliness and anger whenever this happened and left the viewer resetting their own feelings of where Ethan's quest was headed. Fortunately Wayne is able to stir Ethan's intensity, determination and hate right back up in very little time as he delivers a commanding performance throughout. The film's final image is justification enough for its standing: Edwards left alone, somewhat helpless and framed all in black, after his remaining family have re-entered their house to begin anew. 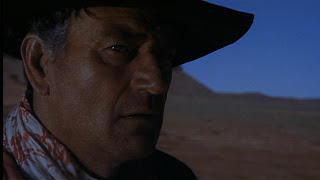 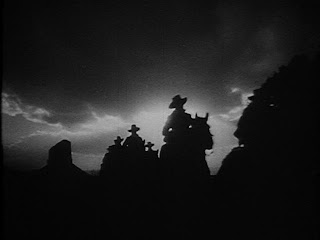 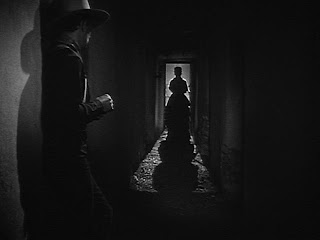 Ford's much earlier (by 17 years) trek through Monument Valley (one of his favourite filming locations) during Stagecoach feels completely fresh even though it uses so many of what now seem to be conventions of Westerns. And it does it all with a steady yet fast moving pace that never lags but still somehow manages to give full characters time to breathe. As a town's Marshall prepares to ride out with the stagecoach passing through (so he can catch up with an escaped prisoner), we meet its six passengers: a drunk doctor and a lady of ill repute being run out of town, a sickly woman trying to meet up with her soldier husband, a whiskey drummer, a gambler and a thieving banker. Also along for the ride is the apparently always necessary comic relief in the form of the squeaky-voiced, slightly-cowardly, but friendly stagecoach driver (who also happens to be a few spokes short of a solid wheel). He seems to be the only one who is an open book - everyone else is keeping their secrets close to the vest. It's a strong set of characters and once again Ford provides us not only with interesting faces, but interesting people. The sickly woman appears sympathetic, but she won't give the time of day to Dallas (the woman run out of town). The gambler is only after the sickly woman ("an angel in the jungle") and was a supporter of the South in the Civil War, but he's not purely the evil caricature initially expected. The one disappointing character is Gatewood the banker - as he admonishes everyone in the coach with "Reduce taxes! America for Americans! The government must not interfere with business!" while simultaneously concealing the $50000 he has stolen you realize that you couldn't build a more perfect archetype for the modern day, self-righteous, far-right, white collar criminal. There's enough of interest going on with these characters that you barely notice it takes almost a full 20 minutes before we meet the movie's central character: the escaped Ringo Kid (played by John Wayne). And what a meeting! It may be one of my favourite character entrances ever: a quick dolly into Wayne spinning a shotgun around his hand to load it while the camera briefly loses focus and then regains it on his close-up face topped with a gleaming white hat. Ford creates the star image of Wayne right in those few seconds. "Hey, you know that B-movie Western star? How do you like him now!". The Ringo Kid has no issues with catching a ride on the coach even though the Marshall will arrest him - he just wants to get to the end of the line to seek vengeance on the Plummer brothers who killed his loved ones. On the way, they have to deal with squabbles inside the coach, Indians on the war path and a lack of soldiers to protect them. Both Ringo Kid and Dallas show their empathy to others and a relationship begins to evolve, but will the end of the line split them apart? Will they even make it there? 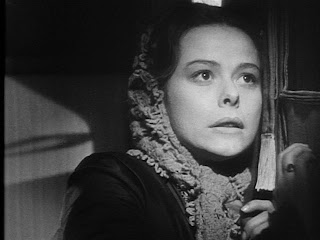 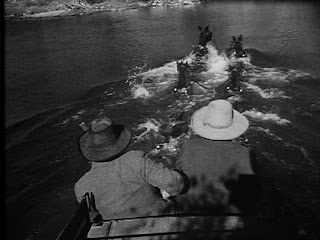 From a pure entertainment point of view, it's hard to beat a film like Stagecoach. The characters and story elements are wound up, put in place and then left to do their thing without always following the line you expect. As well, two remarkable sequences provide some great tension and excitement (while highlighting impressive technical skill) that can rival just about any film out there. A river crossing of the coach is partially filmed from right on top of the coach's roof - right behind the driver with his point of view to the horses pulling it through the water. It's a moment that completely pulls you in and feels almost like a documentary. Later, the Indians chase the coach in the most famous section of the film. Long tracking shots beside galloping horses with stunt men crashing to the ground and climbing all over the coach and the rig pulling it. There's an obvious borrow from this chase in Raiders Of The Lost Ark when Indy pulls himself under the moving truck, but there's no doubt that this single chase inspired countless stunts in years to come (all of which were probably far safer to perform...). 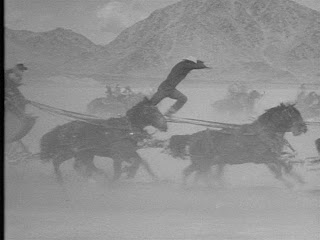 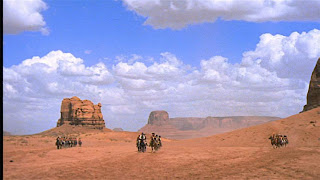 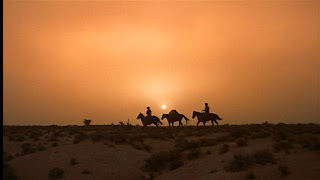 If The Searchers doesn't build to that kind of excitement, it rarely slows down either. It's pace is more languid, but - excepting for some of those poorly timed and slightly too-long comedic scenes - never distractingly so. Both films provide gorgeous shots of the Arizona/Utah landscape (even in the rather old DVD copies I had to use for these screencaps - that Criterion Stagecoach disc is mandatory now), but the sharp crisp blues & oranges of the sky and rocks plus the bright white of high altitude snow is really a thing of beauty in The Searchers. It all provides a counter to Ethan's bleak view and flexible morals: his grey coat from the Civil War shows where he sided, it's strongly implied that he's a thief and his tendency to wall people out is emphasized by the bricks behind the opening titles.

I expect that it was a gutsy move for the studio to put Wayne - who by now, after getting his star-making turn in Stagecoach, gets his name above the title of The Searchers - into such a role. With John Ford at the helm, though, Wayne had a fantastic guide. 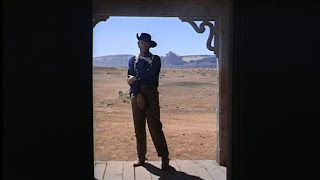 Good reviews. I consider The Searchers to be both Wayne's best film and best performance. As you mentioned he plays somewhat against type in that film. And you can easily see in Stagecoach why Waybe became a star after 10 years of toiling in dozens of films with no luck.

Yeah, both films will easily give a Wayne novice an idea of why he was what he was...Not my favourite actor, but every single film I see with him brings him a notch higher...

I don't know what my favorite Ford Western is. Probably Stagecoach, but I've mentioned The Searchers and My Darling Clementine in the same conversation in the past. Stagecoach is awesome. I love how all the significant character scenes take place at night in a kind of film noir sort of west. That scene near the end when Dallas and Ringo walk by the brothels is Claire Trevor at a high level of performance. Love, love, love Claire Trevor in that movie. The Searchers has one of the screen's all time great performances, though. That film is a complete repudiation of the notion that Wayne couldn't act. (By the way, The Searchers makes a great double feature with Red River).

I think TIFF got the best of me and I forgot to respond to this comment...Apologies.

I think that Noir look you mentioned about Stagecoach is one of the reasons why I really loved it - in particular that late scene with Dallas and the Ringo Kid. And Trevor is indeed fan-damn-tastic - I totally fell for her. And yes, this would be great back to back with Red River - especially with all its very bright exteriors.