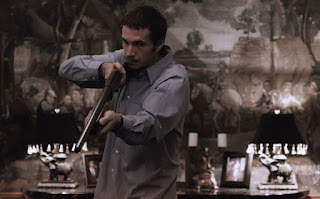 Director Jeremy Power Regimbal's feature film debut In Their Skin is a pure genre exercise in tension and suspense. It's sole purpose in life is to slowly but surely make you feel uneasy, make you wince and make you twist in your seat. Even though it owes many debts to its home invasion movie brethren, it does eventually create its own feeling and tone while also playing a bit on its theme of identity (the nature of your own identity; having it taken away from you; etc.). It makes sense that they moved to a slightly more generic title from its original one of Replicas, though, since it doesn't really spend a great deal of time dwelling on the subtext. It's all build, build, build...And it's quite effective at doing it.

It starts almost from the get-go too. There's tension in the marriage of Mark and Mary and it's obviously been percolating for awhile. The couple and their son take off for some cottage time to see if they can repair some of the damage, but it's going to take some time - they aren't at the screaming fight level, but the slow simmer of unspoken issues stage doesn't look to be ending any time soon. Upon meeting their cottage neighbours - the very odd and somewhat daffy Bobby and Jane - Mark feels obliged to invite them over for dinner. Mary's not exactly thrilled at the idea and accuses Mark of simply not wanting to spend time with her alone. It gets worse during the dinner - one of the more awkward and uncomfortable social gatherings you can imagine - and as it becomes apparent that Bobby and Jane aren't exactly the innocent simpletons that we initially thought they might be, Mark and Mary feel they need to end the evening early and send the couple and their son (who they claim is the same age as Mary and Mark's, but is obviously a good 4-5 years older than that) packing with a very clear statement that they will not be welcomed back.

And then everything starts to close in further as the dinner guests return and make no bones about their intent. They want what Mark and Mary have - their house, their lifestyle, their mannerisms and even their names - and they are determined to take it by force. Pretty simple from their point of view. They want the perfect life and they believe that this couple represents it, so therefore they will simply insert themselves into those roles. Problem solved. During dinner and the initial portion of the invasion of their house, Bobby and Jane start to subtly imitate and mimic some of Mark and Mary's ways of doing things. Whether it's a turn of phrase, a way of brushing the hair off their face or even a fashion choice, they want to become this couple. It adds a new level of creepiness to the whole situation, but it really all rests on the shoulders of the actors as to whether you buy into it. Fortunately, a pretty terrific cast has been assembled. Selma Blair and Joshua Close play Mary and Mark as a couple who know each other intimately and even though there's a strong love between them, there's also lots of irritation at each other's little foibles. They've hit a bump in the road, but just haven't been able to smooth it over yet. Blair and Close pull it off like there's an urgent intensity every time they try to communicate. James D'Arcy and Rachel Miner have the difficult job of playing Bobby and Jane since they're just shells desperate to be inhabited by real people. They get to play the awkwardness and complete lack of self-knowledge fairly broadly at times, but never take it over the edge. It's almost funny, but still makes you cringe a bit. Even the two boys tackle their roles like the seasoned veteran actors they are (each has about 40 credits to his name).

Micahel Haneke's Funny Games is an obvious older relative, but somewhat akin to being In Their Skin's crazy Uncle who bemoans that the kids today just want their dang video games and violence. Meanwhile In Their Skin just wants to go back to its room and fire up the PS3. It's not quite that clear cut since In Their Skin doesn't relish the violence nor bask in it. It does enjoy the prelude, though, and seems to want to stay in a perpetual state of wetting its audiences palate. If it doesn't offer too much more than that, that's still fine by me since it does it all so well. 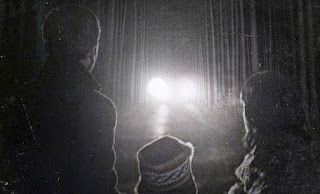