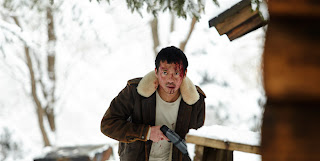 If you can generalize about a single country's cinema, I think the safest statement you might be able to make is "Korean films blend genres better than anyone else". Whether it's comedic dark crime thrillers, melodramatic heist films or goofy family drama monster movies, Korea's filmmakers seem to have a natural desire (perhaps even a need) to morph genres, combine them or simply blow them apart - sometimes within a single scene. Of course, like any other generalization it doesn't always hold, but it does draw me to their films on a regular basis. Hence my immediate curiosity to see Intruders. Once I realized it was directed by Noh Young-seok (whose previous film Daytime Drinking was one of the best hidden gems from TIFF several years ago), it became a must see.

Like Daytime Drinking, Intruders begins with a young man from Seoul trekking up North by bus to spend some time in the cold and snowy mountainous region of South Korea. While he just wants to get to his friend's currently unused resort to focus on finishing some writing work, he's a bit out of place there and this doesn't go unnoticed by the locals. He manages to grab the attention of a recently released convict who insists on giving directions, providing uncalled for assistance and doing his best to get a good solid drinking session going. The humour is deadpan and is based on the city's guy's baffled reactions to the rural guy's odd yet still friendly behaviour. Unlike the previous film, our city dweller this time manages to avoid too much heavy drinking at the outset, but it's not like he's any better focused. He's a champion procrastinator and keeps finding other ways to waste time and avoid his writing, including traipsing through the woods out back, discovering trapdoors in the woods and running into a bunch of other people - all of whom seem to be just a wee bit off...

But remember this is a Korean movie, so as soon as you think you're getting comfortable with the rhythms, pace and parameters of Intruders (ie. "city boy meets odd country folks" riffing), things might be about the shift on you. And that's certainly what you get after our hopeful screenwriter runs into some "hunters" in the woods. Slowly but surely, more suspense is added as he begins to believe there's a threat around him. He's heard gunshots and footsteps around the little cottage he's in, so when a small group of skiers ask for lodging, he agrees in order to gain some additional protection. His ex-con buddy shows up again as well and through misunderstandings, bad decisions and sudden dark turns in the story, we start wondering who the intruders really are.

The radio and TV are always blaring the latest escalating tension between the North and South (amped up by the U.S. involvement in missile tests), so there's always a sense of unease about things. Noh's use of long takes while two characters converse keeps things feeling spontaneous and this just adds another level of tension. As things go from bad to worse for the writer, a new character shows up, the space under that trapdoor is explored and the suspense continues to rise. Meanwhile that quiet humour keeps popping up in the oddest of places as everyone in the film keeps assuming things about everyone else. As funny as many of the situations are, those assumptions may be a big reason why the writer asks at a low point "Why is this happening to me?". The film succeeds on all levels - it entertains, it engages and it questions. Is it any wonder why Korean cinema is producing some of the most exciting films out there?
Posted by Bob Turnbull at 00:21