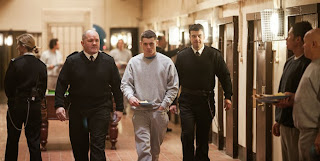 There's a special delight in finding that hidden gem at a film festival - not just to lord it over others that they "missed out" (though admittedly that brings a certain sense of pleasure to it), but because it helps to validate the ongoing search for great movies tucked away in corners or buried under the avalanche of big studio marketing product. I suppose it also stokes that obsessive need to watch "everything", but when you start getting that little buzz, that little jolt of realization that you're watching something really damn good when you simply didn't expect it, it's totally worth it.

That was my feeling somewhere around the 45 minute mark of David Mackenzie's Starred Up as everything clicked into place and it dawned on me that I was seeing a great film. Even in my very tired frame of mind at 12:30 in the afternoon (smack dab in the middle of the festival and with four more films to follow that day), I was energized and knew that I was on to something here. As it turns out, Mackenzie's story of a young man who gets moved up to the big boys prison where his father also happens to reside ended up being my very favourite film of the entire festival. There was a palpable sense of authenticity about the story, location (an actual old prison) and characters that kept a semblance of unease throughout the film and brought unpredictability to each and every scene. These extraordinarily flawed individuals could explode at any given moment, but could also surprise via their cunning, logic and occasional ability to see the bigger picture and not just the end of a shiv. The story kept a strong forward momentum, but also provided an ebb and flow in the status of different characters and overall emotion. Never once did I doubt that any of the prisoners had a grab bag of violent tendencies or the capacity to ignore suffering in others, but I also never quibbled when they showed an ability to change, to consider consequences or to think instead of simply reacting. In other words these were fully realized people on screen.

The central focus is 19 year-old Eric, who has just been "starred up" to the adult prison. He may have been a teenager while in juvenile hall, but there's no time for "coming of age" here. He's given his own cell due to "risk" factors and doesn't waste much time in creating a makeshift knife from his toothbrush. His demeanour, expression and body language all show he is always alert and won't wait for trouble to come to him - he'll beat it to the first punch. In his wing of this sprawling prison, just a floor above him, is his father Neville. Though he initially comes across as less physically intimidating, he has power in this particular section of the jail. He knows guards, has wider access to amenities and has his own "crew". Their first conversation in the yard is less family reunion and more about chest thumping warnings, but Neville has a clear message for his boy - be careful who you piss off here. There's a pecking order in prison and Neville reports up to an even higher level prisoner who rules the entire wing from his cell (replete with numerous comforts).

Eric is involved early with an incident and gets on the radar of a volunteer counselor who runs a regular group meeting for some of the more hot-tempered convicts. The interaction of the therapist and his group is one of the many strong points of the film - there aren't any platitudes or easy answers, there's always a step back after good forward progress and respect is earned within the group. Eric sees something of value in the group, but he'll always have impulse and rage issues and struggles to keep his distance from his father (who tries to scuttle any outside influence his son receives), the boss of the wing and the evil warden who is convinced he is and always will be a burden on society. If there's a weak bit in the film it lies with that cliche warden since he is the sole character without any subtlety or complexity. Otherwise, the film is nigh on perfect in its depiction of not just brutal life in the slammer, but of the different ways men desperately crave respect (in all its forms) and the lengths to which they will go to get it.