Blindspot - "The 36th Chamber Of Shaolin" and "The Five Deadly Venoms" 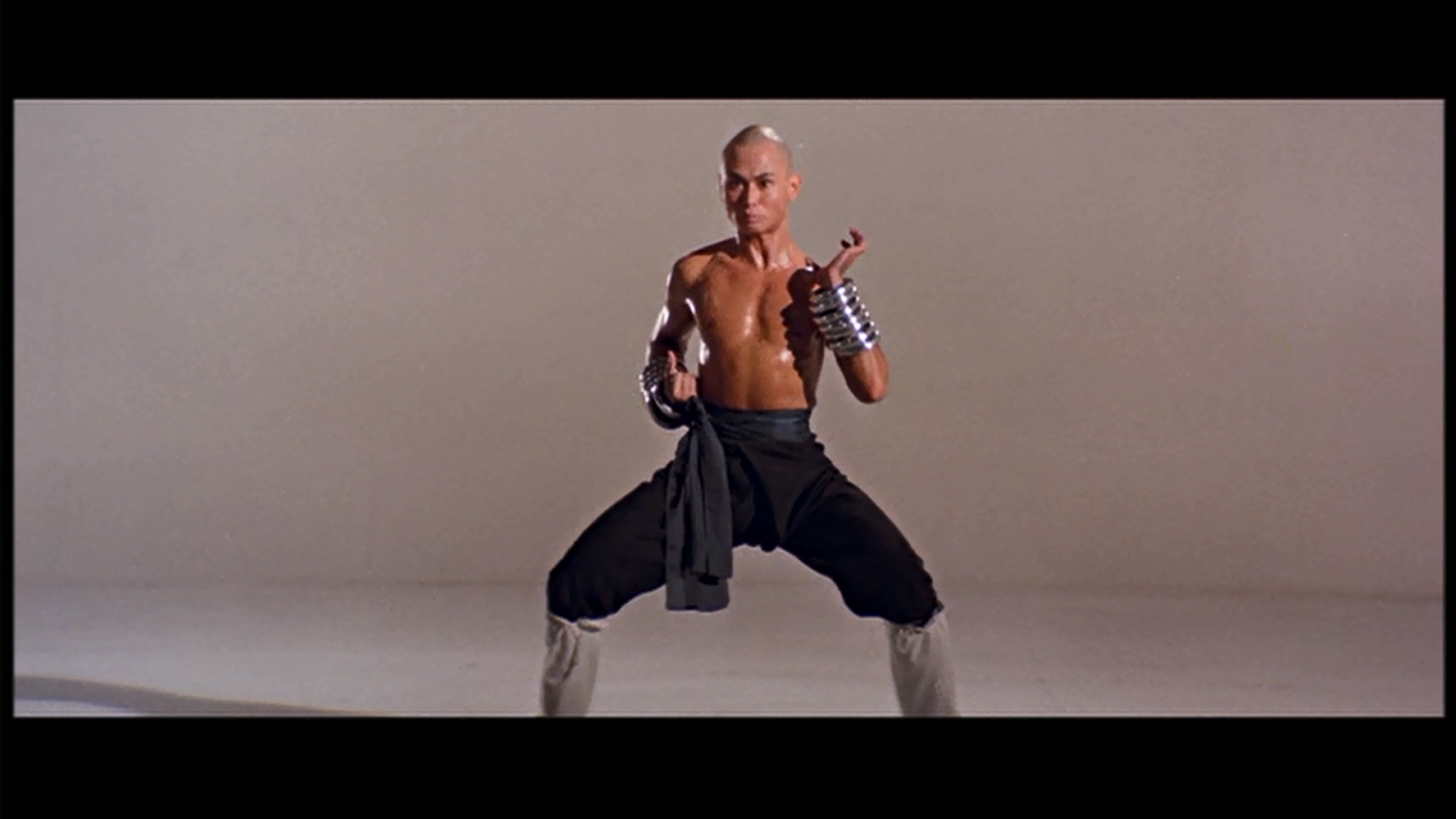 You may notice a distinct difference in the quality of the screen caps contained within this post. 36th Chamber Of Shaolin has a proper widescreen aspect ratio and clear image (straight from the Dragon Dynasty DVD) while Five Deadly Venoms has a poorly cropped 4:3 image that was obviously recorded years ago off TV to well-worn VHS (and then transferred to YouTube where I found it). Was I desperate to catch that second film and willing to watch anything I could source? No. It was actually a bit of a design point. 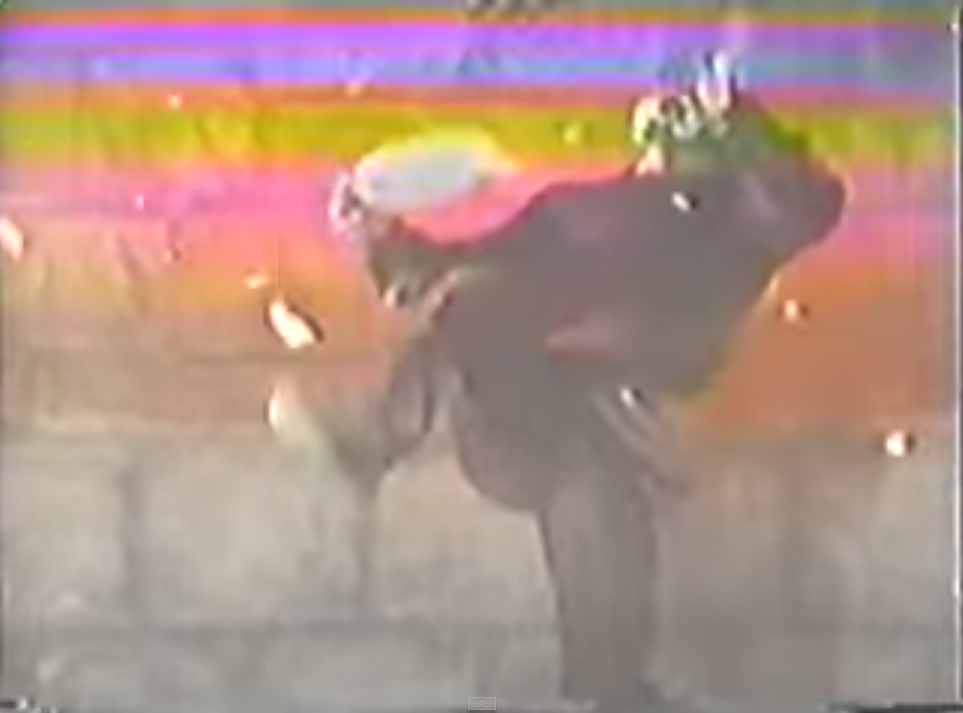 Several months ago when I first mentioned this pairing of Shaw Brothers Kung Fu films for my Blindspot, it was suggested to me that I should swing on down to Chinatown and get my viewing copies there. After all, crappy, English-dubbed copies are how most people get introduced to Kung Fu in the first place. Though I completely saw the merit in the idea, I was against it for two reasons...First and foremost, I really can't handle cropped films and bad dubbing - hell, even Fellini films dubbed afterwards back into their own language (as Fellini intended) drive me a bit crazy since things like intonation never quite match up quite properly when dubbed. I've been a stickler for proper aspect ratios since realizing what they were (somewhere during the mid-point of the VHS years) and mostly seethe if I come across a film on TV or DVD in a bastardized form. Secondly, I already had that copy of 36th Chamber on DVD sitting at home on my stack of unwatched films. But the idea of watching at least one of the films in the format in which I would've seen my first taste of Kung Fu was still somewhat appealing. My knowledge of Kung Fu is not extensive (loads of Jackie Chan, the more serious Come Drink With Me, the much less serious Mad Monkey Kung Fu and all sorts of clips and scenes from Sunday afternoons long ago), but when I think of it, I do indeed think of desaturated videotape stock, people being cut out of the frame and halting English dubbed over to attempt to match with the characters on screen. Oh, and enough wooshing and whacking sounds to make a foley artist break into a sweat. 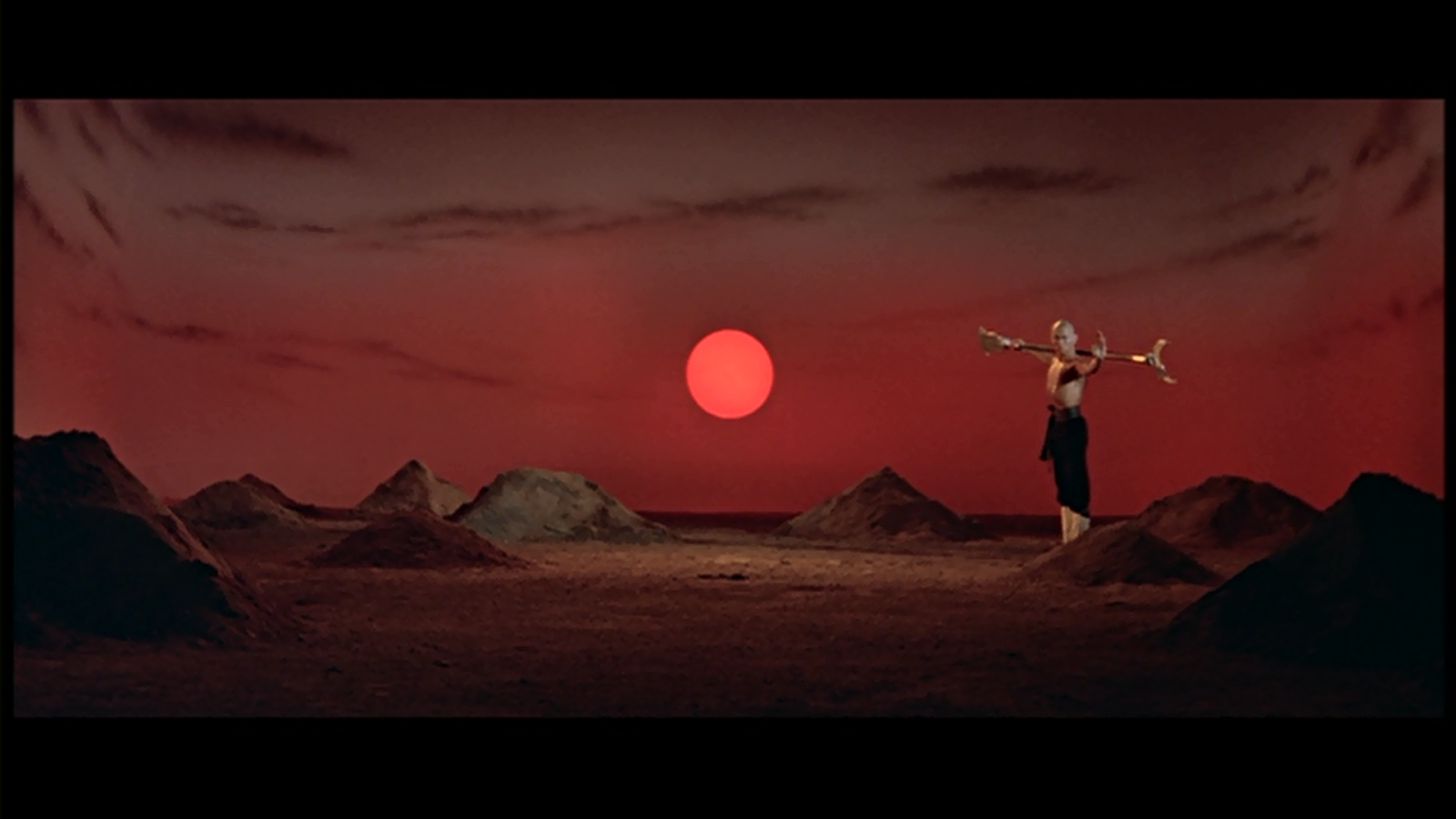 All of which can make a Kung Fu film somewhat hard to take seriously. But then I started to watch 36th Chamber Of Shaolin...Its opening sequence of Chia-Hui Liu (aka Gordon Liu) framed in different manners executing solo Kung Fu moves was enough to show that there was a great deal of artistic craft going on here. Not that I doubted there would be, but it completely settled me into being able to look upon the film as a complete entity. It also validated my decision to see this film on its full canvas - what a shame it would've been to miss the entirety of each of these opening shots. Not only the backdrops and art direction, but the perfectly sculpted body of Liu and each one of his refined moves. When the story starts, though, his character San Te is somewhat less attuned to the ways of the Shaolin monks than he is in those credits. He is a frustrated young student watching his surroundings get overrun and manhandled by the Manchus of the Qing Dynasty. His protests get him in some trouble and he manages to escape to the Shaolin monastery. He seeks to become enlightened in the ways of the masters of martial arts so that he may return and help get back ownership of his old village to its denizens. After being left to tend to menial jobs for awhile, he figures out that he can now ask to be taught Kung Fu. He discovers that it is a painstaking process and that he must focus on and master individual skills one at a time in 35 separate chambers. The film glides by quite easily as it works through a straightforward three act structure: young student in village; student at monastery working through the different chambers one at a time; monk leaving school to seek justice. 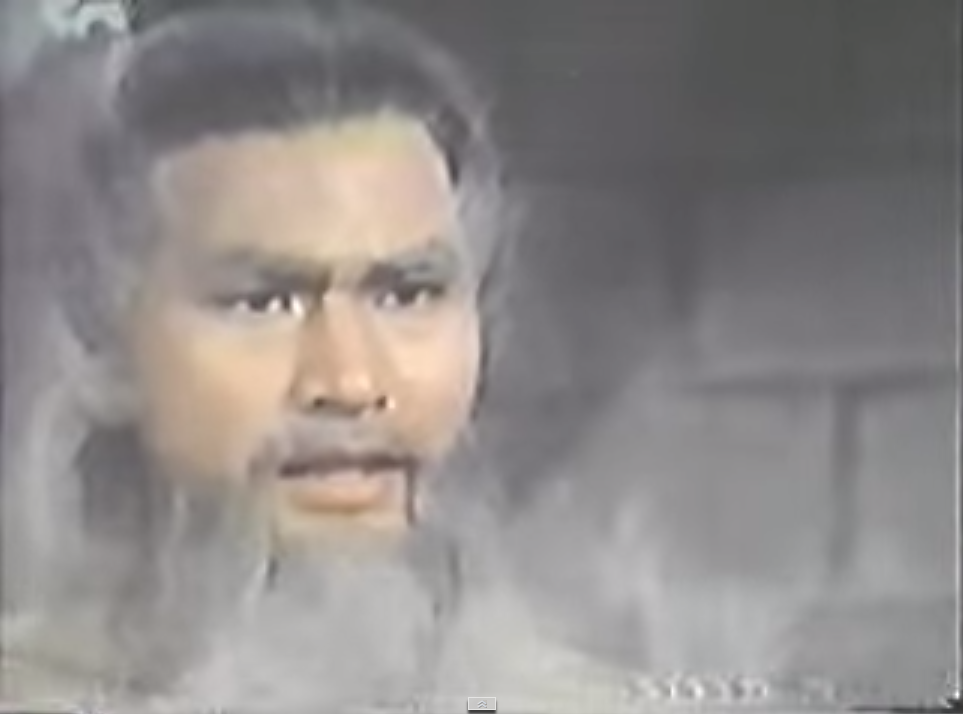 There's less straightforward about Five Deadly Venoms. The plot description is easy enough: a student of all five major disciplines of fighting (Centipede, Snake, Scorpion, Lizard, Toad) is instructed by his dying teacher to find 5 previous students. Each of the five had mastered one of the five styles and the teacher is worried that some of them may turn evil. The student knows all five styles, but has mastered none and so must team up with one of the five to ensure none of the others commit any crimes. The teacher does not know the names or faces of any of these masters, so the student is left to his own devices to find them. Like 36th Chamber, the film opens with some great montages as we see each of the five masters (in their masks) performing their specialized skills. The choreography and filming is definitely leaning to the sillier side of things (Centipede smashes plates falling from the ceiling, etc.), but it certainly sets up the rest of the film to be a battle between these five with the wildcard of the student thrown into the mix. And it is to a certain extent, but also continually falls apart into over-explanation, needless plot points and the occasional bits of goofy humour that don't work very well (at least not for me). Worst of all, there seems to be a definite lack of actual Kung Fu throughout the film. The final fight is great and helps to redeem things, but short of the little bits sprinkled here and there, it becomes somewhat tiring as we flit between Centipede/Snake and Lizard/Toad as they try to outmaneuver each other (while the student observes). Meanwhile, Scorpion is unknown to everyone. 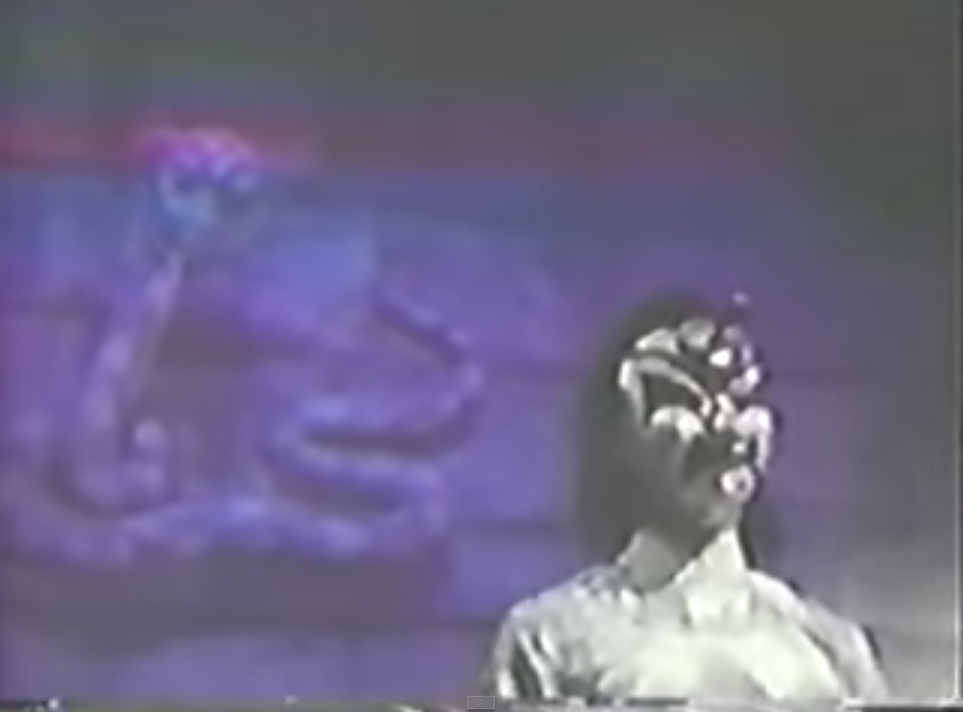 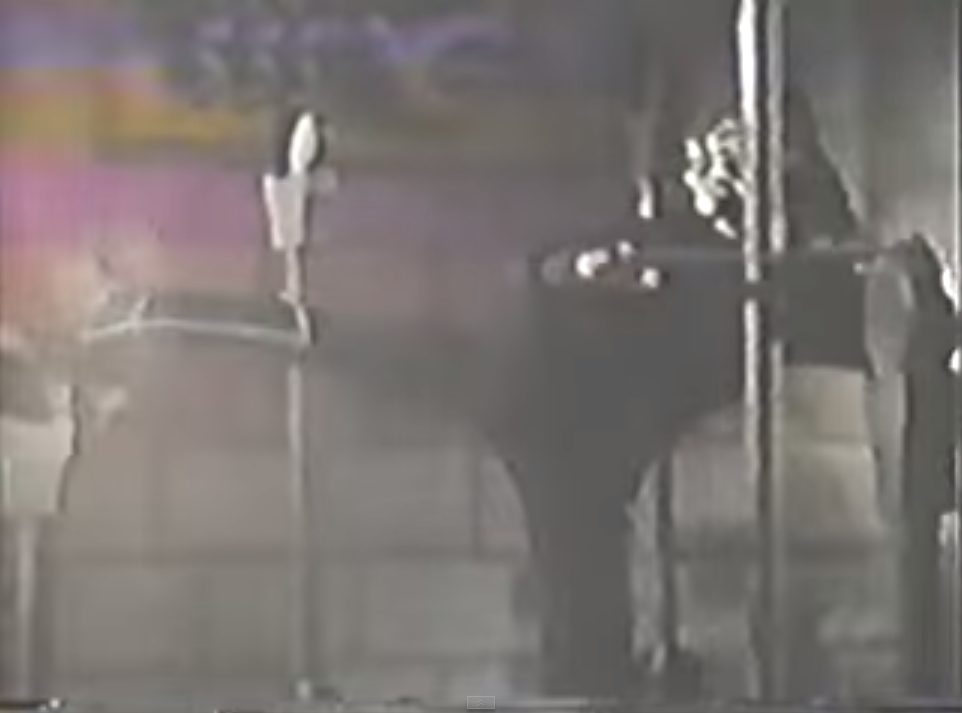 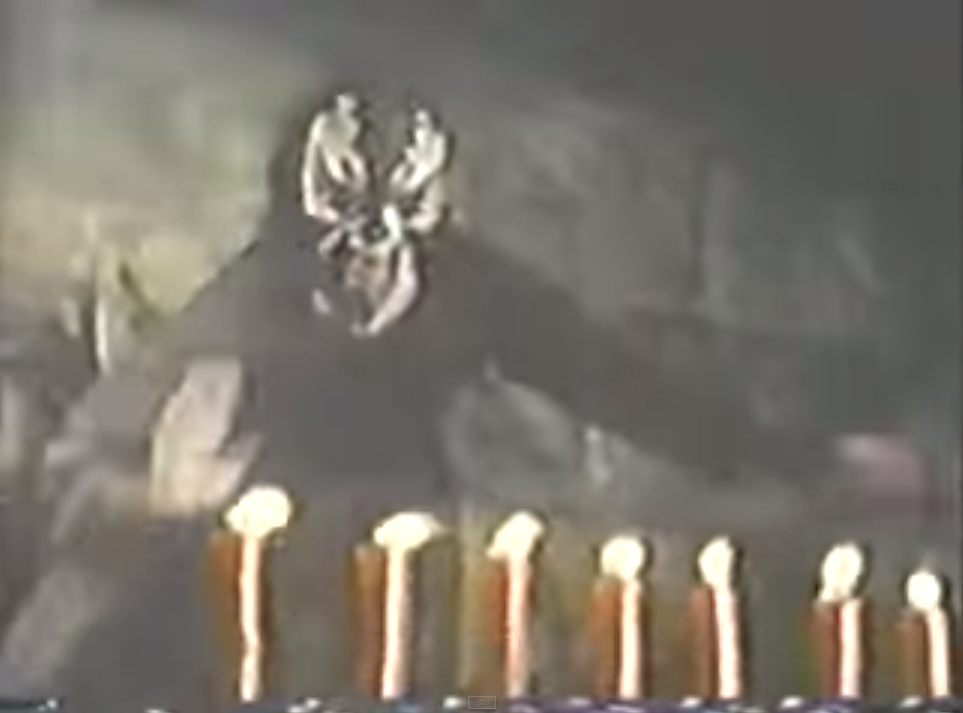 Admittedly, I have to firmly blame the crappy quality of the video and the annoying dubbing as prime reasons for not enjoying Five Deadly Venoms as much as I likely should have. A pristine copy probably wouldn't have vaulted it above 36th Chamber, but with blurry faces continually being chopped at the edges of the frame and English sentences being chopped into odd meters, I found it hard to stay with the story and get pulled into the film. I expect it is still a few notches below 36th Chamber in terms of its action, story, pacing, cinematography, etc., but I feel I need to see it again in much better circumstances. The concept is terrific - 5 different styles of attack based on reptiles and insects held by 5 hidden masters and only one student left to find them. There are moments of real mystery as you try to figure out who is who at the same time as the student, but it never felt like a cohesive story. Only the final fight really gels as the student finally dives headlong into battle with and against the masters and we witness a variety of well planned choreography. As with 36th Chamber, there's certainly some "fantasy" in some of the moves (leaping on the sides of walls and staying there, hovering in air longer than gravity would allow, etc.), but it all fits into the reality of the worlds in the films so there's no issue. 36th Chamber's Kung Fu moments easily win out - the battles are more crisp, there are more elements in play (various weaponery for example) and even the training sections as San Te moves through the chambers are really entertaining. My favourite is probably the Head Chamber where he solely practices using his head for different Kung Fu moves (initially getting battered by having to bat heavy sandbags around with it) as well as the first time he crosses the water using only the floating pieces of wood. This is where 36th Chamber excels - in treating its slightly ridiculous set pieces with serious tones while finding the right mix of physicality from its actors and the added "effects" (e.g. editing, wires, and huge dollops of additional sound). 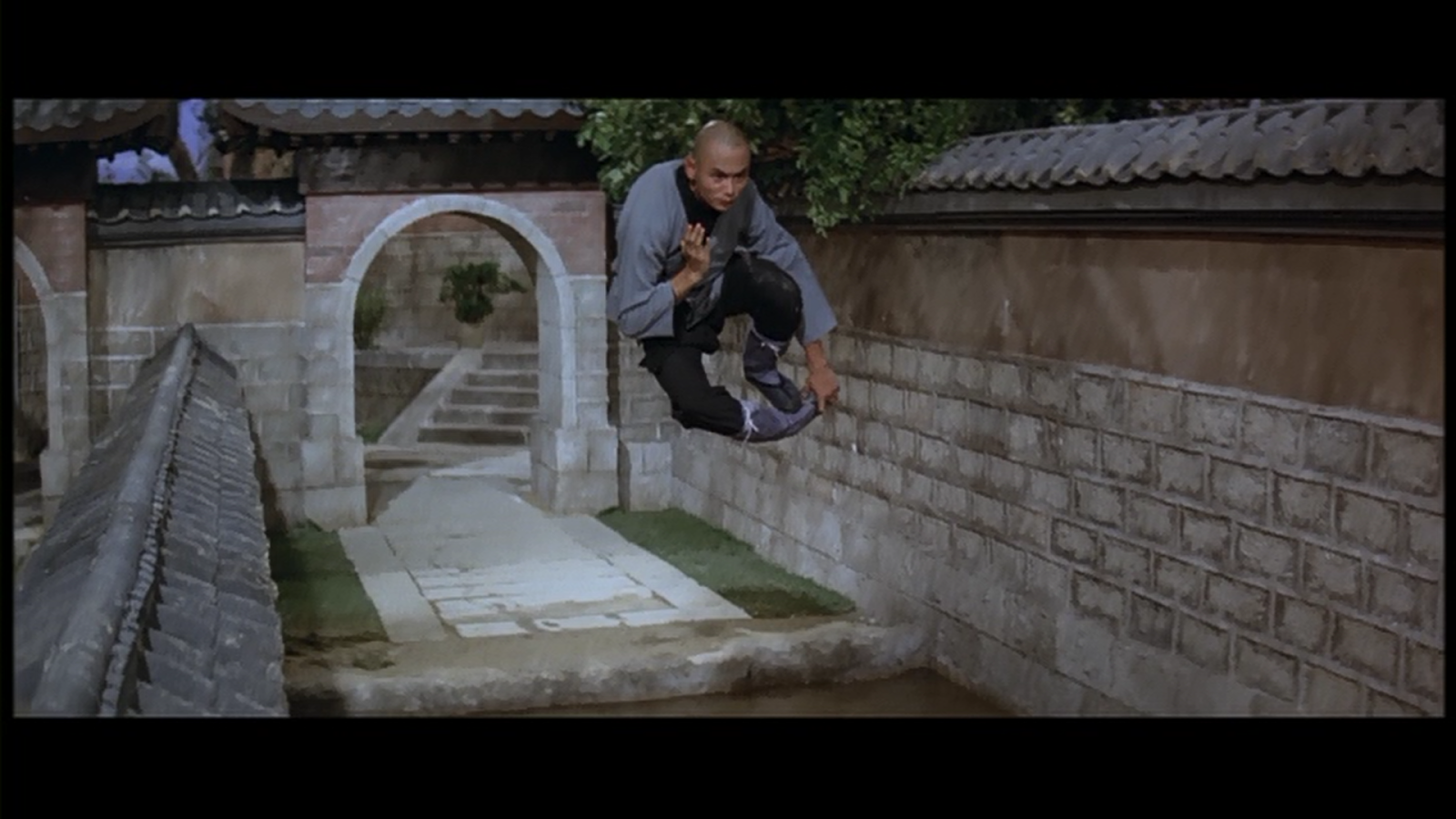 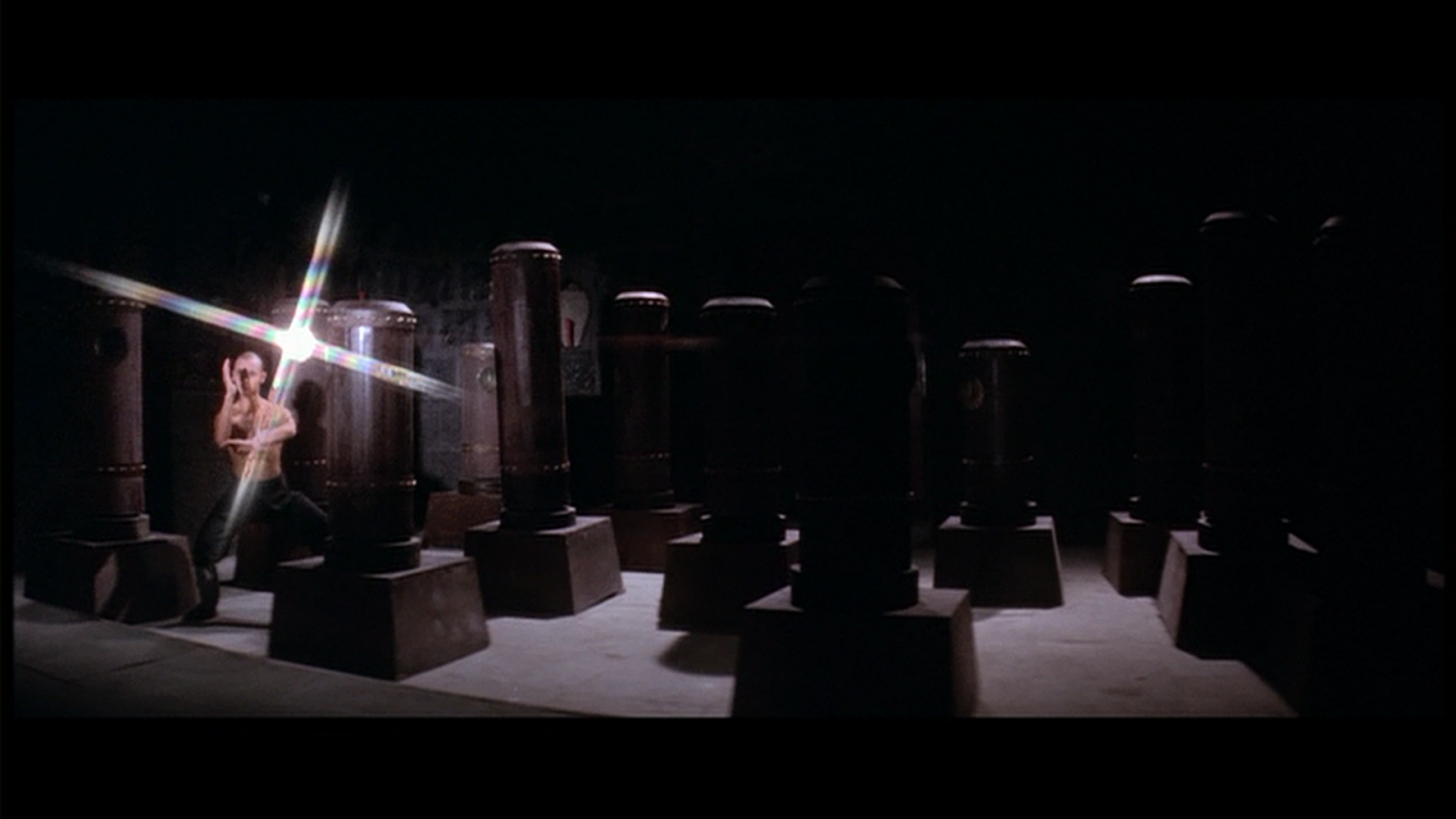 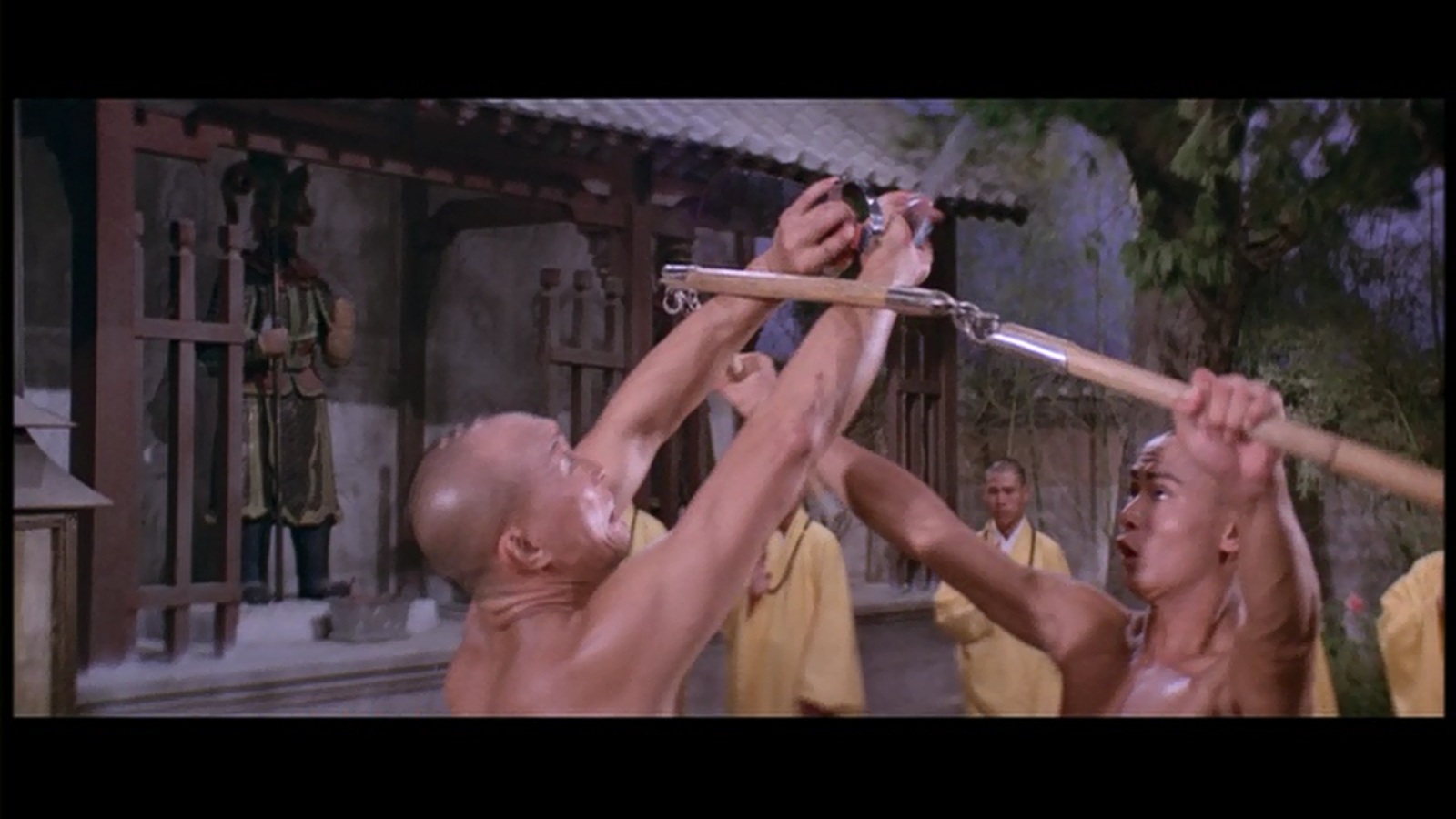 The foley editing of arms and weapons whooshing through the air and fists connecting with bodies is certainly overdone and can feel comical at times. It obscures and wears down Five Deadly Venoms (though with what feels like additional music, I can't say for sure how much is present in the original cut of the film), but feels just fine in The 36th Chamber Of Shaolin. I don't profess to be a Wu-Tang Clan fan (a neglected area of my musical background), but the seminal rap group was heavily influenced by 36th Chamber. It's easy to see how San Te building towards creating a new 36th chamber in order to share Kung Fu with the common man could have been inspiring to a group of diverse rap artists. One could also develop an entire philosophy simply from the words of wisdom spoken by the many monks from the different chambers. Five Deadly Venoms had much less depth, spirit and entertainment within its restricted walls, but there was still enough there to possibly draw me back for a revisit with a superior copy of the film. At the very least I could get some better screencaps from it... 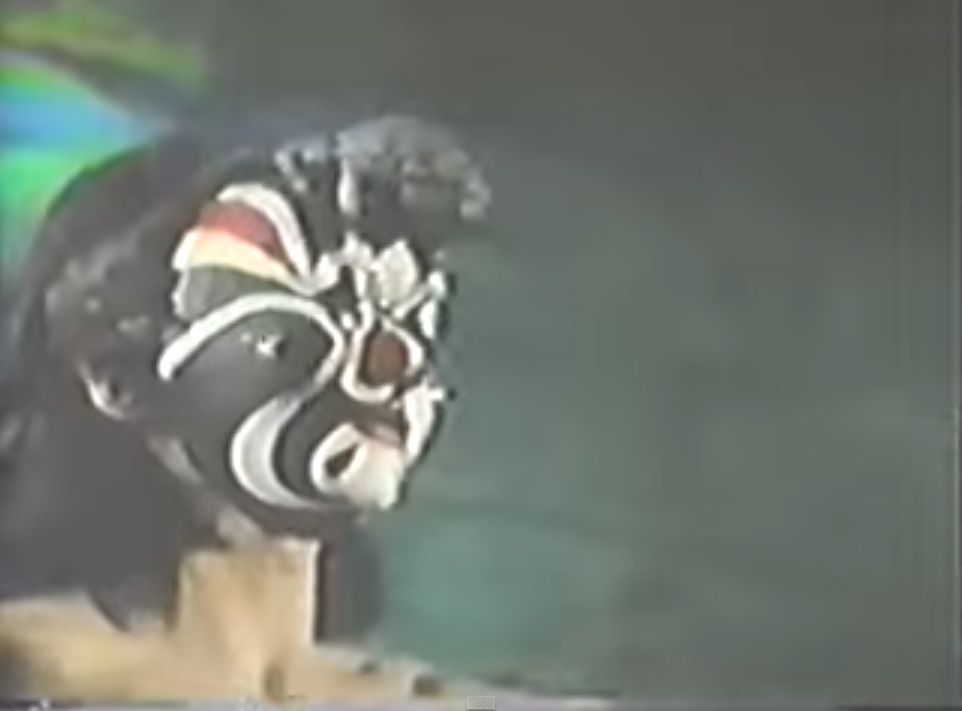 I think the Shaw Brothers films are always best off viewed in as good a quality as possible, because they generally look great. Some of the sillier 80's kung fu movies probably play just as well on ropey VHS transfers though.

I must admit, I haven't seen Five Deadly Venoms yet. Although I'm a massive martial arts movie fan, the UK is terrible for releasing Shaw Brothers films. I'm too tight with my money to import them all.

I've seen 36th Chamber though and liked it quite a lot. I'd recommend 8th Diagram Pole Fighter if you haven't seen it already. That's my favourite of the Shaw Brothers golden era. It's got some awesome action scenes, especially towards the end.

I'd be very curious what you think of Five Deadly Venoms. I will definitely watch it again with a clean print - I know it affected my thoughts about it. It's a good point that the Shaw films were the cream of the crop and certainly deserve the best viewing quality (then again, everything really does...).

I've already ordered 8th Diagram since I found it pretty cheap. Looking forward to it.

Eight Diagram Pole Fighter is pretty awesome. My own favorite Shaw film is Intimate Confessions of A Chinese Courtesan, though.

The Dragon Dynasty DVD of Five Deadly Venoms is sourced from the Celestial catalog (just like their version of 36th Chamber) and is reallly pretty. In truth, though, that's a film that's best if you first encounter it at the age of twelve or fourteen. Chang Cheh made much better films.