Blindspot - "East Of Eden" and "Who's Afraid Of Virginia Woolf?" 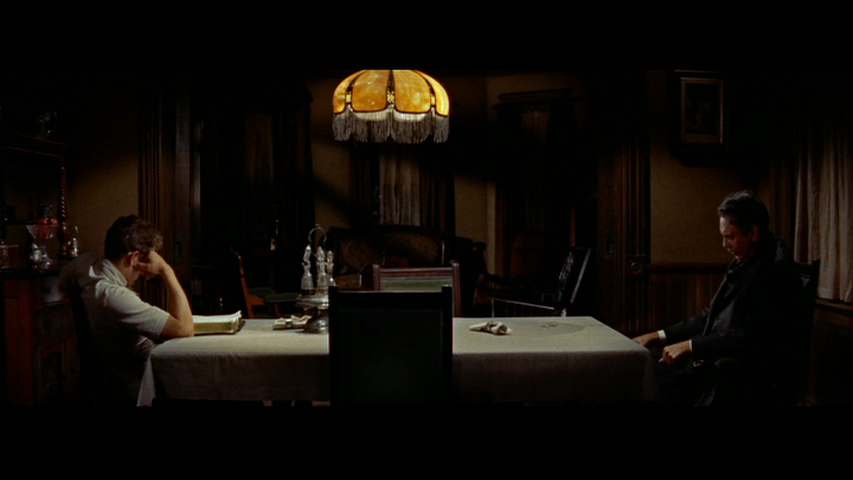 There are some who believe that Good and Evil are two very distinct objectively defined entities and that things and ideas are black or white, true or false, moral or immoral. Some would say that thought could be extended to define people in these terms and to categorize them in one of two camps: "Pure as the driven snow" and "Face of an angel" OR "Pure evil" and "Rotten to the core" (phrases we all use to describe people with no middle ground). Of course, these are a fool's definition and try to provide easy answers to explaining behaviours that please or enrage us. The "truth" is that it all depends on your perspective and viewpoint. The landscape is made up of thousands of shades of grey and they are all relative. And speaking of relatives... 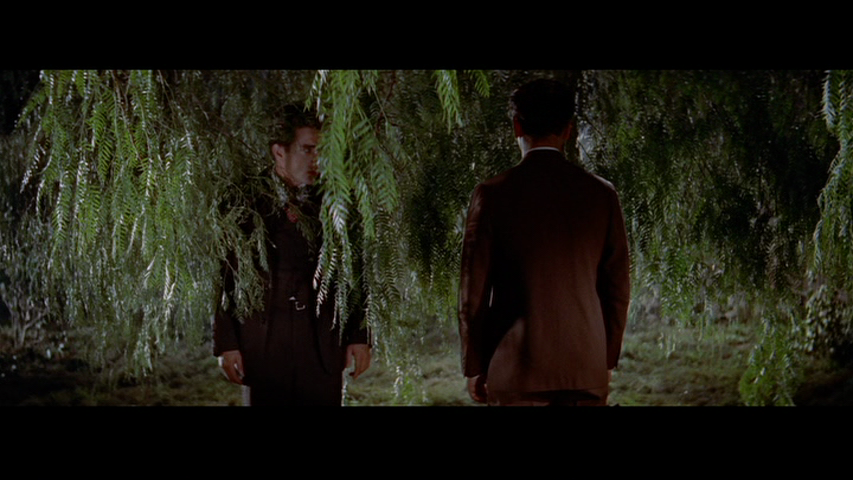 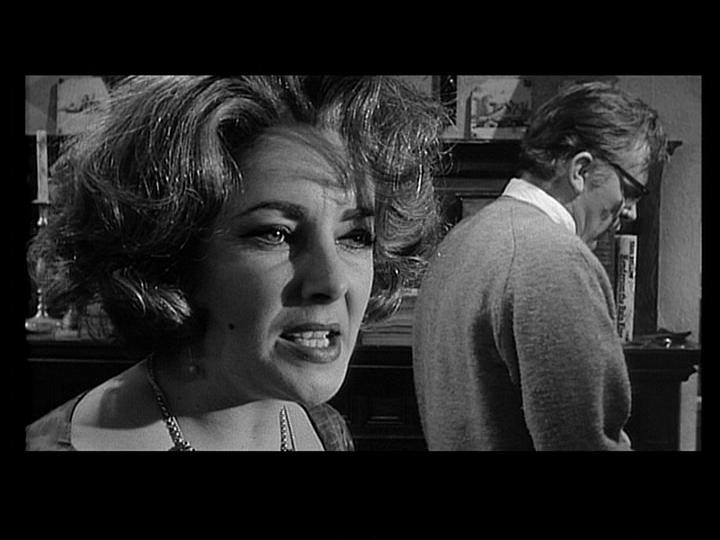 The sibling rivalry within East Of Eden and the spousal feuding of Who's Afraid Of Virginia Woolf traverse many degrees of that light to dark spectrum between good and evil. Hurting the one you love is always a complicated and confusing thing to do and that's certainly the case in both films. You could be forgiven, however, if you didn't see a lot of shading in that good/evil spectrum during the onslaught that is Virginia Woolf. From the first words spoken, it feels like a two hour blitz of spiteful bile and vituperative arguments. Most of the insult flinging occurs between the middle aged George and Martha, but they aren't shy in sharing it and spreading it around. George (Richard Burton) is a History professor who lives within the campus grounds with his wife Martha (Elizabeth Taylor) and after an evening at a school social (with a few drinks) they set about their favourite sport - a little verbal sparring with each other. It seems to begin harmlessly - a barb here, a curt word there - but as it escalates, one can tell this is much more than just tiredness and booze stirred together into a cranky cocktail. It seems to be their lifeforce. The only way they can get through the day at this stage of their lives together is by tearing each other down. Even the moments of true passion which still exist between them can't stem their craving for a verbal attack fix. "I disgust me" says Martha, sounding every bit like a drug addict. And when the young couple Nick and Honey arrive for some nightcaps (Nick is a new professor that Martha flirted with at the social event), the mixture of booze and disgust becomes downright toxic for all. 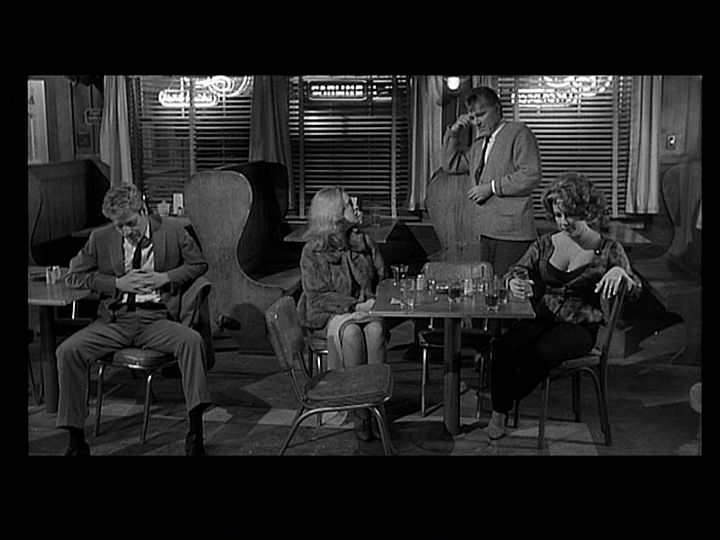 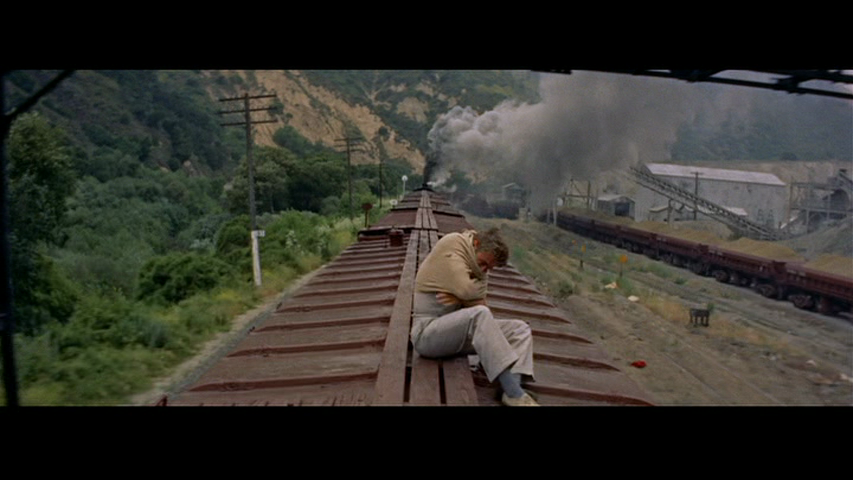 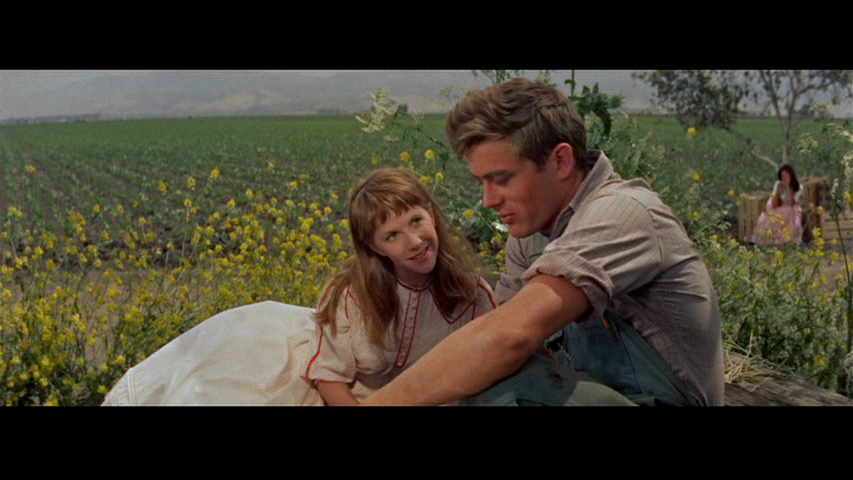 East Of Eden wallows less in that deep end of the cesspool, but still gets itself pretty dirty...Its tale of two brothers competing for their father's love and attention is a modern take on the Biblical story of Cain and Abel, with older brother Cal (James Dean) typically coming up short in the sweepstakes to gain his father Adam's (Raymond Massey) favour. The turning point is when Cal's younger brother Aron usurps him by announcing his engagement just before Cal presents Adam with the proceeds from his business as a gift. Their father rejoices at Aron's news, but scowls at Cal's offer of money: "I'd be happy if you gave me something like your brother's given me - something honest and human and good". The film returns to this perception of good and evil over and over ("Was she bad?", "Do you think I'm bad?", "He's good!") as people try to figure out which end of the spectrum they lie on. The film makes the case that there aren't really any absolute good or evil people since we are all capable of both. The choice of behaviour is ours. Throughout East Of Eden you can see the reasons for each person's behaviour: good intentions gone wrong, decisions based on immediate emotion, and longer term goals that don't show themselves right away. 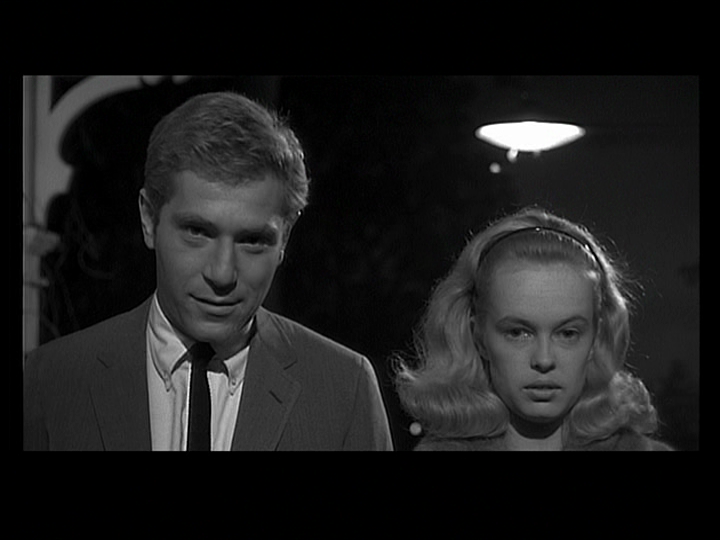 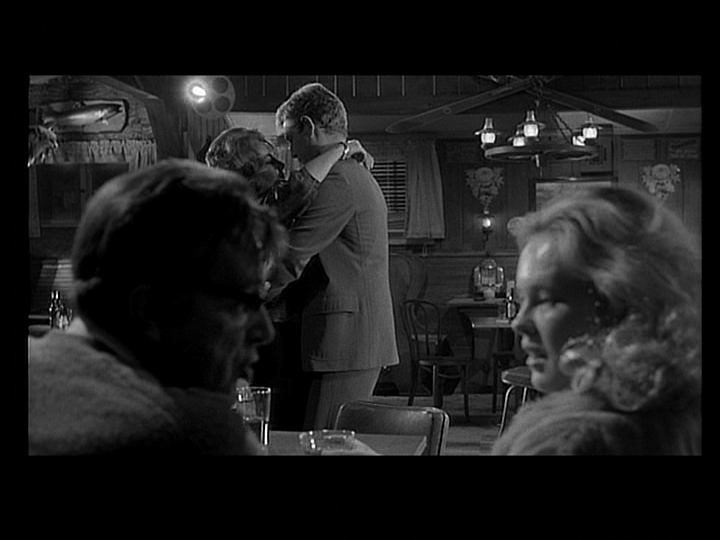 Reason is a bit further removed from the world of George and Martha though...There are so many points within the film that they could stop the attacks and nastiness, but just as it threatens to peter out, it escalates to even further heights. Short of booze and pride, one never quite gets a handle on exactly why they behave in this manner (nor why Nick and Honey - after initially getting undeservedly pulled into these warped games - begin to go on the offensive with almost equal gusto). But that simply makes this examination of fragile souls so damn interesting and fascinating. It's not simply that car wreck that everyone strains to see, it's that YouTube compilation of Russian Road Rage videos. It's an exhausting film for the viewer, but the actors (in particular Burton and Taylor) are magnificent in their ability to continually wring more madness and anger and sarcasm from their characters. Mike Nichols (who passed away shortly after I watched the film) somehow juggles the ever increasing desperate attempts at lashing out of all 4 characters within fairly constricted spaces (the rooms of the house, a car, a bar, etc.). Tiring to experience, but oddly exhilarating. 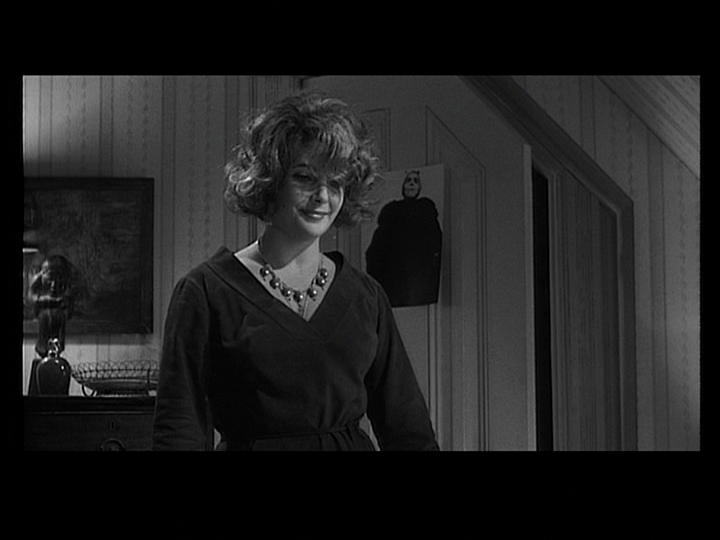 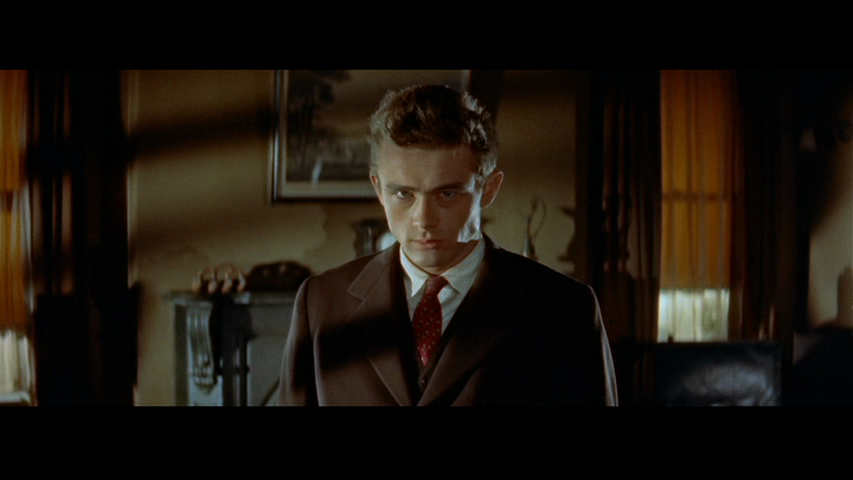 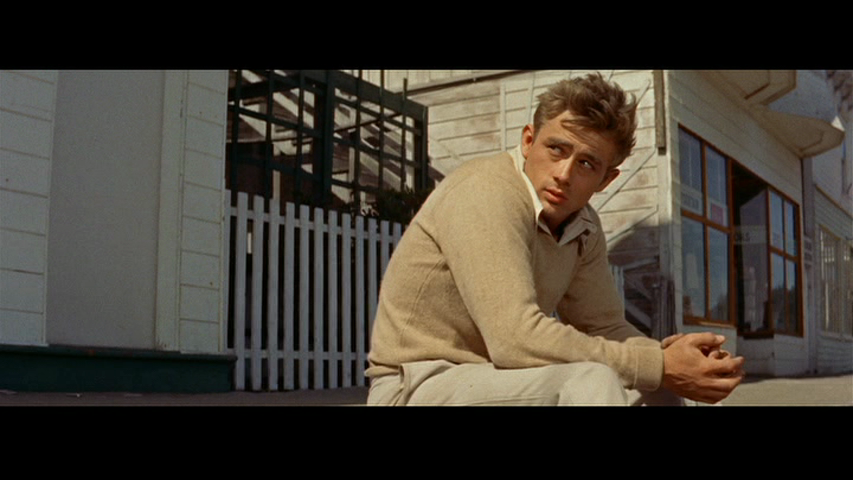 East Of Eden didn't quite hit those peaks. It's not that it fails in any category whatsoever (top notch acting across the board, what felt like perfect framing of characters from scene to scene, glorious photography, etc.), but the melodrama on hand never quite seemed to go beyond the simmering stages. The film has reveals and characters going off deep ends, but as mentioned, you could always see the reasons behind their movements and reactions. Perhaps it's unfair because I'm comparing it to Who's Afraid Of Virginia Woolf, but I wanted more escalation, more anger, more unbridled explosions of emotion, etc. It gave me a few too many moments to reflect on some plot points and relationship arcs that didn't quite flow naturally. In a great melodrama, I wouldn't have cared as much, but here it didn't quite sit as well.

Regardless, it tells its tale effectively and remarks on our perception of our own behaviours. Both films (especially through the eyes of family members) cover a wide slice of human actions and reactions - from kind to cruel and from logical to lunatic. 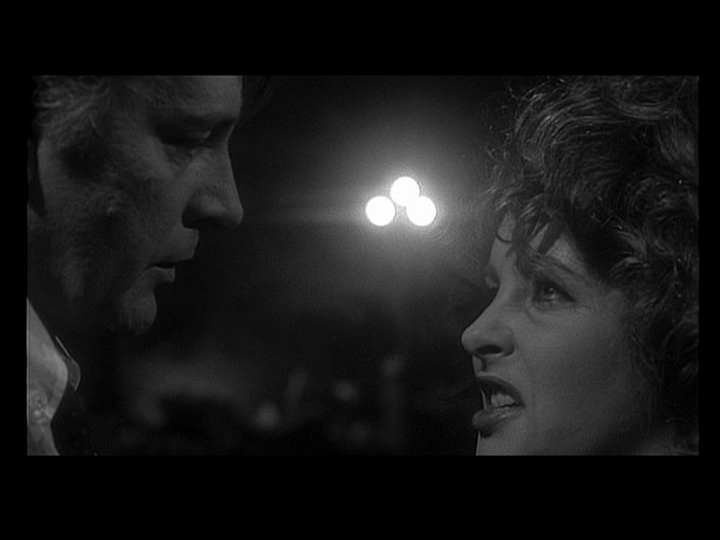 I LOVE East of Eden. James Dean at his finest and some amazing storytelling. Incidentally, I love your blog, too!

Thanks Lauren! I always appreciate any kind words thrown my way...B-)

Dean is pretty great in East Of Eden...I just wished I liked the movie a bit better. I'm probably quibbling about the things I didn't like and I suppose it does suffer a bit in comparison to the raging lunatics of Virginia Woolf. I could definitely see a revisit of it...