Random Notes on the 2008 Oscars 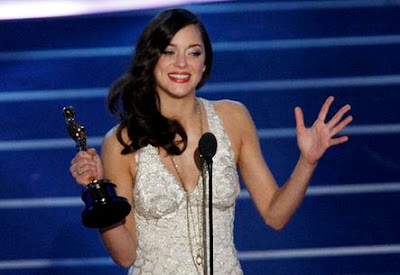 Did I mention Marion Cotillard is really good-looking? 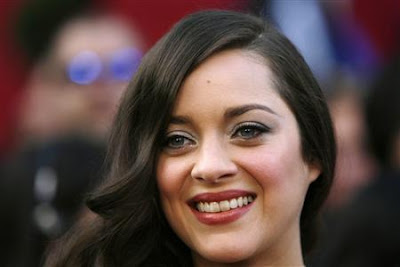 Email ThisBlogThis!Share to TwitterShare to FacebookShare to Pinterest
Labels: Oscars

I loved Marion Cotillard. When her makeup artist won, she seemed genuinely moved and had tears in her eyes. When she won, her speech was beautiful and spontaneous, and I loved her line "there really are angels in this city". Apparetnly, she made an even better speech backstage to the press and even sang a little Piaf number for them (although I heard she didn't actually do the singing in the film, thought I might be mistaken).

I had an Oscar party and there were some jokes that carried through the night.

The slippery spot was maybe one of the best. We would predict if the incoming would slip saying things like "he's coming in hot... watch out."

And man Helen Mirren is still a fricking knock-out. I might argue she is more beautiful today then when she was younger. But that might be crazy talk.

Ethan Coen's nonchalance was a nice touch...but Joel seemed to rescue his brother from indifference with a few choice, and reverant, words for the film industry. Still not sure how I feel about the Coens sweeping the top prizes...I revere No Country immensely, but being tagged as Best Picture is not something that recent history necessarily celebrates (e.g., A Beautiful Mind, Chicago, Crash, etc.). Maybe we're entering an early 70s-type period where serious criticism aligns with Academy gold...we'll see.

Thanks for the comments guys.

Yeah, Cotillard charmed my socks off. I'd say what else she could have charmed off, but my wife reads my blog...

Piper, we noticed Travolta's hair too. It just didn't look like it could be a natural occurrence of any kind.

I seem to remember that Mirren was very attractive in "The Long Good Friday" with Bob Hoskins. At the very least, she hasn't missed a step. And she can growl "cojones" to me any time she wants...B-)

Chet, although it's mind boggling to me that "No Country" is now a member of that horrible stretch of winners from 2000-2005 (except for Return Of The King), one can only hope the win inspires filmmakers to keep telling their stories in original ways.

I don't believe in Cotillard. I think she's just an elaborate ruse. I saw a documentary about it once.