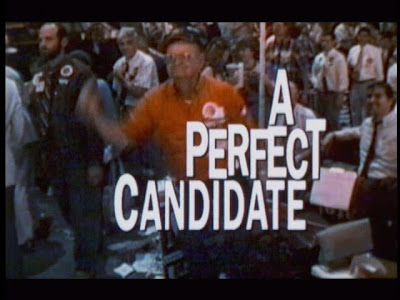 For whatever reason, I had an urge to re-watch one of my favourite political documentaries last night. It's a film called "A Perfect Candidate" from 1996 and it tells the story of Oliver North's run for a seat in the Senate in 1994 representing Virginia.

It's absolutely fascinating. The directors remain silent and simply let the footage speak for itself - and holy crap does it speak volumes. It's not just about Ollie North or his strategists or Republicans vs. Democrats (the Democratic candidate is even more of a boob) - it's the marketing of politics, how you can spin anything into a positive message and a good case study of why so many voters are apathetic. To quote a voter from the film: "It's a choice between a devil and a demon. Who are you gonna vote for, the flu or the mumps? What disease do you want?"

Some of the many moments:


But the biggest jaw dropper for me, was early in the film just after the press are invited for a photo op to watch Ollie do some practice shooting. The camera is in tight on the face of a young boy (maybe 5 or 6) as an off screen voice asks him who he is voting for. His answer, of course, comes back as "Ollie North". The camera pulls back as a woman standing over the boy says "Show 'em your gun!" The little tyke is holding a rifle about as tall as he is. "What do we shoot?" she asks. "Clay pigeons and Democrats" the wee lad says...

And the woman is just beaming with pride at what she thought was just the most adorable little thing. 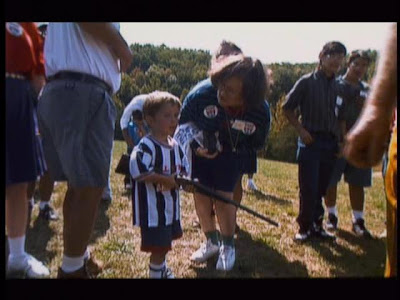 I've seen the film before, but it still kinda made me physically ill.
Posted by Bob Turnbull at 16:39

Email ThisBlogThis!Share to TwitterShare to FacebookShare to Pinterest
Labels: documentary

I just watched "Our Brand is Crisis" over the weekend which is about a group of Democrat-leaning political consultants (including James Carville, Clinton's campaign manager) who work for a candidate in the Bolivian presidential elections. It shows how American know-how can achieve short-term results, even as American ignorance of history and local issues can lead to dire consequences.

To be fair, not all of the consequences were the fault of the consultants, but their one-size-fits-all brand of political strategizing looks pretty bad in hindsight. And these were well-meaning people.

I love these kind of films. They let me get my political thrills while still feeling superior. :)

Truth is, politics is nasty and full of compromises, but somebody has to do it. That's what democracy is all about.

So, you watching the Super Tuesday show tomorrow? :)

I totally forgot about Super Tuesday until I turned on The Daily Show (uh sorry, I mean, "A Daily Show" until the strike ends). The highlights should be on tonight's show.

I've seen "Our Brand Is Crisis" as well. You're spot on when you mention the short term thinking...

I'm a sucker for docs like this as well. I have "...So Goes The Nation" winging its way to me as we speak from zip.ca (I bumped it up my queue after re-watching "A Perfect Candidate"). It's about the 2004 presidential race in Ohio - that state was predicted to be a swing state and many of both campaigns' resources were focused there.

I look forward to feeling superior all over again...B-)

Great post and great doc! What makes it so affecting is that the camera seems to simply capture what is going on with the barest (if any) manipulation from the filmmakers. It is the anti-Moore in that regard. Politics is nasty, and particularly nasty for the voters when given choices like these.

Yes, I had thought about the comparison to Moore. Boy, would that have been a different film with him at the helm...