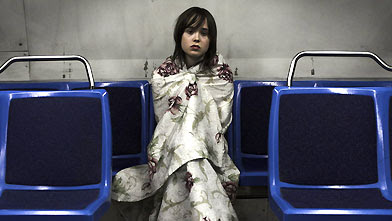 Yesterday I commented over at Lazy Eye Theatre on a post about "Cloverfield" and the possibility that it may have a sequel (which would actually just be another camera's point of view of the same timeline). Because of its style of handheld camerawork and the suggestion of another poster that perhaps this second movie's cameraman could run into the first film's one, I suggested that they could make 4 films in all and then show them all at once in different quadrants of the big screen - kind of like "Timecode" where you could mix the sound to focus the viewer's attention on any of the parts of the screen. OK, a crappy idea no doubt, but it wasn't until later that I realized that coincidentally I had scheduled myself to see another split screen and multiple angle movie later that same evening - Bruce McDonald's "The Tracey Fragments" (as part of Canada's Top Ten series at Cinematheque Ontario).

Of special interest to many: the film's central character (c'mon, guess her name...) is played by Ellen Page. Yes, that Ellen Page. She plays a 15 year old going through a difficult period at home, at school and pretty much everywhere else. The film's narrative thrust is her search for her 9 year old brother, but it's really more a picture of the thought processes of a young teenager struggling to find a place for herself as she tries to cope with problems both big and small. 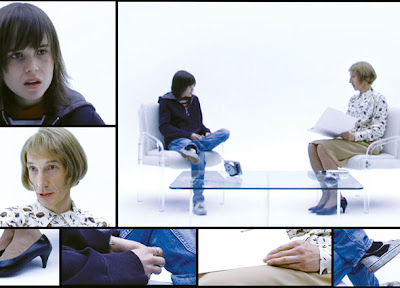 It plays as an experimental film - the timeline for the narrative is staggered (the key event happens midway in the storyline, but we are shown it at the end of the film) and the screen is split into various different angles and shots for practically the entire film. It's constantly shifting and changing throughout - sometimes a simple split screen in two, but more often than not several different sized frames arranged as puzzle pieces. As well, occasionally those frames move or get repeated. It can be very disorienting at times, but the threads of the story never get lost and enough signposts (her clothing, etc.) are left to help centre you to the timeframe of the story. 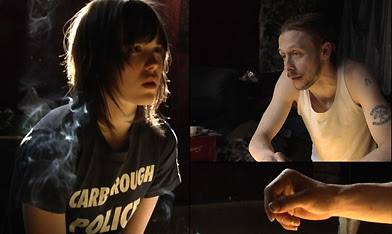 And it's quite successful at getting across her state of mind. The different frames feel like her different scattered thoughts - sometimes providing different views of her, sometimes her own point of view and occasionally smaller frames showing bits and pieces of her environment. Combine this with repeated phrases coming from the different corners of the screen, doubled voices and swings between emotional states, and it leaves you with a feeling of what it might be like to be this girl. 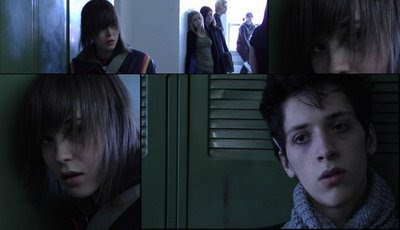 But is the film entertaining? Is it compelling? Well yes and no...I hate to pick on a film that tries to push some boundaries, plays with form and is indeed successful with it in many ways, but who really wants to feel like a messed up fifteen year old girl for 75 odd minutes? The movie is exhausting at times and the addition of other experimental techniques (especially repeated film loops and some film effects) just makes it all a bit too much. Ellen Page is fine in her role (especially in her quieter moments), but every good moment or sequence was followed by even longer stretches of fevered frames or ugly characters. And the story barely hangs on...It does manage to keep you interested though and the final shot of the film is an excellent way for it to wrap up.

The screening was followed by a very relaxed and interesting half hour Q&A with director Bruce McDonald. He stated that the initial concept of the film came from watching Norman Jewison's "The Thomas Crown Affair" where the split screen technique was used several times for scene transitions. The thought crossed his mind about using the device for an entire film - would it be possible to sustain it for a feature length story? At the very least he has definitely shown that the technique is very useful in getting certain ideas across. In the end, your enjoyment of the film will likely be based on your interest in the formal characteristics of filmmaking.
Posted by Bob Turnbull at 09:50

I've been curious about this film, which looks like a significant departure for McDonald (I've always loved Roadkill, Highway 61, and Hard Core Logo). Thanks for filling in some blanks.

How did you get the screen caps, though?

The wonders of Google Image Search...

As I mentioned in my email to you, I hope I didn't come across too negative about the film in that one paragraph. It's not overly entertaining, but I salute McDonald for running with the concept and really conveying the feeling of being this 15 year old girl.

This is one I've been hearing little bits about here and there. Hopefully sometime I'll actually get the chance to view it myself. From your write up, it seems like it's affective at least.

Very interesting-looking. I'll likely check this one out (eventually).

I'm always fascinated by the use of split-screen technique. McDonald's stated inspiration THOMAS CROWN AFFAIR did it well, albeit sparingly and as a gimmick. TIME CODE was pretty lame--it didn't seem to have a story to tell, just an idea of how to tell one. To my mind, the masterpiece of split-screen filmmaking is MORE AMERICAN GRAFFITI. I am totally sincere in saying it is a wonderful use of the technique and a better film than the original.

By the way, Bob, thanks for the kind words about my Pinky Violence essay over at Lazy Eye Theatre.

Sorry about the lapse in answering the comments...

cg and jpb, it really is effective in some spots in getting across the bits and pieces that make up the confused character of Tracey. I expect with Ellen Page's Oscar nom, this shouldn't have too many issues getting out on DVD.

Ed, I think I enjoyed "Timecode" more than you, but more as an experiment in playing with the form. The only time I've rewatched it was when I listened to the commentary. Of course, having Selma on hand doesn't hurt...

"More American Graffitti"? Really? Hmmm, well it's never been on my radar, so I guess I'll add it to the list. You've got me damn curious now.

And you're more than welcome...B-)