A gift from Intellect - Free online copy of Directory of World Cinema: Japan 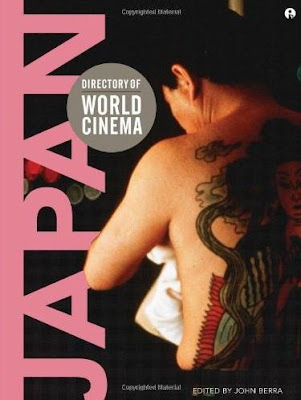 OK, I'm biased up front as I was one of the contributors to the book, but this is a pretty sweet deal. Intellect Books has just released for free an online version of their new book "Directory of World Cinema: Japan". Not just the text, but the fully formatted final version with images.

The volume contains numerous reviews of a variety of different films from Japan ranging across many decades and genres. It also includes longer articles on specific directors, styles and movements. Editor John Berra has done a fine job putting everything together and is already planning a 2nd edition. It's a great looking layout and I expect that many people will still want to purchase a copy even after seeing the free PDF file.

I'm pretty excited about it as it's the first time I've ever been "published". The other contributors include some notable authors, scholars and filmmakers and the entire book acts as a great overview and sampler of Japanese Cinema. As Berra states:

"This was never intended to be a conventional film guide, as the overall aim was always to discuss Japanese cultural life and history as expressed through the medium of film."

Looking forward to getting my very own physical copy come its release date (mid-February according to this amazon listing).
Posted by Bob Turnbull at 17:05

This is fantastic, Bob! I've been corresponding with Masoud from Intellect about the other planned volumes and he seems almost desperate for more contributors and even editors. Seems strange, but could be a great opportunity. The book looks great and the quality of the writing is pretty high, too, with a few exceptions (kidding!)

I know John Berra (editor of this volume) was also working on an American Independent volume. I'd be curious to hear what else they have slated. Feel free to email me if you don't want to plop it in the public comments...