An Odd Commonality - "Antichrist" and "Heartbeats"


After a lengthy bout with horror films throughout October (I'm still taking them on, but more sporadically at the moment), I've been bouncing around a bit (Japanese monster movies, documentaries off NetFlix instant viewing, a few old musicals, a re-watch of the Bourne trilogy, etc.), but now I'm settling into catching up on 2009/2010 releases. So in the last few days I've wrangled "This Movie Is Broken", "Please Give", "The Killer Inside Me", "The Social Network" and, the most recent two, Lars von Trier's "Antichrist" and Xavier Dolan's "Heartbeats".

I had few expectations of any commonality between these last two - von Trier's is an out and out horror film and Dolan's follow-up to his debut "I Killed My Mother" is a look at two friends who fall in love with the same guy. I knew "Antichrist" would look gorgeous (it did) and I expected as much from "Heartbeats" as well (though with far more colour), but not much else otherwise...

Then I got this: 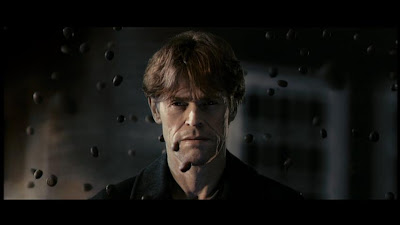 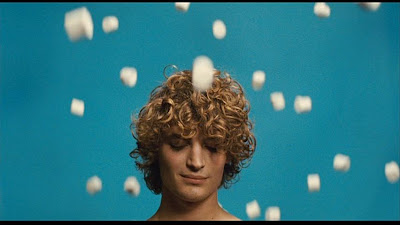 Totally different of course - one has falling acorns, the other falling marshmallows.

"Heartbeats" was a frustrating watch. Aside from a terrible English title (the French title "Les Amours Imaginaires" - ie. Imaginary Lovers - is not only far better suited to the film, but far less trite), the film just didn't offer much new to the story of unrequited love. Neither of the two friends was an interesting character and I couldn't see why the common love interest even wanted to be friends with them. Some lovely uses of colour, but it amounts to very little - a major step backwards for Dolan. I hope he invests more in the writing and character development for his next film since he has the visuals pretty much down pat.
Posted by Bob Turnbull at 10:50

Ah, but what did you think of Antichrist? I'm surprised it's not showing up on more lists of the best films of the year. I saw nothing else like it this year.

What did you think about "This Movie Is Broken"?...great music video, mediocre flick

What did I think of Antichrist...Well, that's not an easy question is it? I agree, I saw nothing else like it this year. It was fascinating at times, gorgeous, provoking, frightening, cringeworthy, maddening, etc. At one point I thought that the many people calling von Trier a misogynist were totally missing the point and then I thought that perhaps they actually had a point and by the end I was leaning towards them being wrong again.

So yeah, it was pretty damn good. B-) Not many films will toy with me that way.

Dave, you may have summed up my feeling on "This Movie Is Broken" pretty perfectly. The music was a bit of a revelation to me as I had not heard any BSS up to watching this. I love the idea of the movie, the way it was shot and the fact that MacDonald made Toronto look great even in the middle of a garbage strike. But I couldn't quite get past the characters - I had no idea why she would even give this guy the time of day, his friend was a doofus and the argument backstage simply didn't feel natural (they were building up to it, but then it just happened and was done). I was even OK with what happened between him and his friend at his apartment, but I just couldn't buy the fact that she came back. So the core relationship of the movie failed for me.

Damn, I have to get some of Broken Social Scene's music though...

A little bit of this too:

Nice find Squish! You know, I bet there's a whole series to be made from these kind of shots...