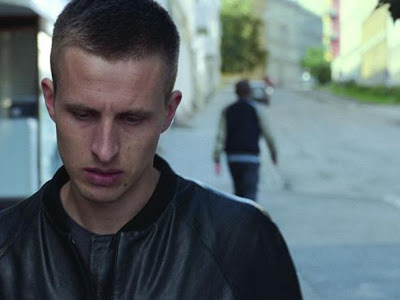 Chip Lary from Tips From Chip is doing a series of reviews of films with numbers in their titles - starting at zero and working his way up. When I suggested Joachim Trier's latest film "Oslo, August 31st" as a possibility he asked if I could review it for his site. Given that it was one of the many strong films I saw at TIFF this year that I had yet to review, I agreed - sometimes I simply need a kick in the butt and a deadline to get moving on overdue reviews (my wife might want to generalize that statement somewhat...). So here's the review I wrote for his site (which he just published yesterday):


Though I don't completely subscribe to the "Auteur" theory in all its finer points, I do tend to look at films as having directorial stamps on them - not just from common stylistic points of view or as vehicles that cover similar themes, but as works that have a certain quality about them. For example, when I see a movie like Joachim Trier's debut film "Reprise", I take note of the name of the helmer because there's a certain something about the film that appeals to me and an attention to detail that shows the person "in charge" cares about the entirety of the work. So when I noticed that Trier's second film "Oslo, August 31st" was to screen at this year's TIFF, it immediately made my short list. It's a very different film than its predecessor as it was shot quickly, for little money and eschews the many flourishes and stylistic touches of his first film. However, it still fits nicely next to "Reprise" because there is not only a deft touch with its characters and a strong sense of place, but also an overall confidence about its story.

Based loosely on the French novel "Le Feu Follet" (which Louis Malle turned into the 1963 film of the same name - better known to English speakers as "The Fire Within"), the film shows a day in the life of one particular troubled person, but it also illuminates an entire city at the same time. The very beginning of the film shows home movies of a still smallish Oslo, but in the present day the city seems to be growing quite nicely as many cranes litter the streets signifying new construction. As Anders wanders from friend to job interview to his family's old house, we get to see a large chunk of a lovely, restful city - a stark contrast to Anders himself. You know that friend you have that just can't seem to get it together? While everyone has their ups and downs, this one particular person always seems to be in the worst shape (or at least that's what they tell you)? That's Anders. He can't pull himself together and has already tried to kill himself once while in rehab. "I've always thought happy people must be morons" is one of Anders philosophies and gives a good indication where most conversations with him will likely lead.

Those conversations are key to the success of the film - each one feels natural, genuine and very real. Particularly those between Anders and his best friend who listens to him intently and tries to engage him, but is at his own crossroad. Anders is not the only one struggling to find his place in life, but he just can't see past his own current problems or even allow anyone else to. He scuttles a job interview that was going well as soon as his drug history arises. The interviewer seems sympathetic, but Anders can't even consider that he might catch a break. Instead of suffering rejection, he slams the door shut himself (a tactic he seems to use extensively across all relationships). Throughout the day, there are also kernels of optimism and hope - a young girl in a cafe makes a "bucket list" with her boyfriend, a late night swim with laughter, watching and listening to different people go about their day - there's plenty of opportunity and promise in these lives. But Anders has lost that ability to find any of it. He can hang on to memories and images from his past, but that's all they are now and they provided no solace, nor encouragement.

At a Q&A after the film, Trier talked a bit about the idea behind the production process which was to do it simple and fast. As other plans were taking their time to get off the ground, he and his creative team decided they just needed to get out and start filming with a shooting ethic that used as many locations and their natural environment as possible. Also, they needed to work with actors that could take scripted dialogue and turn it into realistic moments of conversation. It's exceptionally effective as it keeps you close to Anders, makes you want to point out all the possibilities around him and frustrates you as he turns away from every single one of them. I can't wait to see what Trier does next.
Posted by Bob Turnbull at 09:22