The Little Film Festival That Can (with a little additional help...) 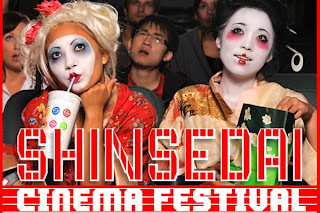 And now for the somewhat longer version...Four or five years ago - just around the time I was getting into blogging - I met a fine young man named Chris MaGee online. He convinced me to write for his burgeoning Facebook group called the "Toronto J-Film Pow-Wow" and contribute short reviews of Japanese films. Shortly after I agreed, I had the chance to meet him briefly at a screening of the fan-damn-tastic "Survive Style 5+". We only chatted for a short time and then met again as I was rushing out of a Cinematheque showing of the classic "Kwaidan". It wasn't until Chris unveiled his grander plan to turn the group into a full-fledged blog and web site that we finally got to know each other - ie. quaff a few beers and argue about movies (he's still totally wrong about Takeshi Kitano's "Achilles And The Tortoise").

As the web site grew and a few of us contributed film reviews on an almost weekly basis, Chris started to roll out phase 2. By being on top of Japanese film news and making a name for himself as an authority, Chris started to build up his contacts and worked his way onto a panel at the Nippon Connection Film Festival in Frankfurt. That was all pretty impressive to us all - until, that is, he came back and announced that not only had he met noted Japanese film writer Jasper Sharp (also co-editor of Midnight Eye), but that he was going to start a new film festival with him...here in Toronto.

The Shinsedai Cinema Festival has grown every year since - just finishing up its third year this past Summer - and has been a springboard for several young filmmakers. The name of the fest literally means "New Generation" and was conceived to be (as the web site states) "an annual showcase of the best in new, independent and rarely seen Japanese films." It would have been easy to fold to financial pressure and bring in the bigger mainstream crowd-pleasers or gory, cyber-splatter genre flicks (neither of which are bad by definition), but the programmers have stuck to their original concept and are being embraced by the independent film community in Japan. 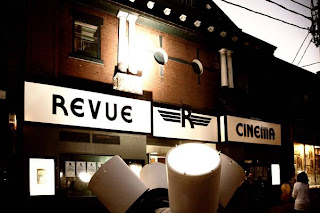 For the 4th go-around next year (July 12-15), a few changes are coming...The entire festival is moving to a more easily accessible downtown location - away from the classy spacious surroundings of the Japanese Canadian Cultural Centre and to the Revue Cinema (400 Roncesvalles Ave. - near the Dundas West subway). Though the festival did well in its more northern Toronto digs, it will likely have a wider reach now that it is moving to the thick of things. The downside is that new sponsors need to be discovered. Chris has been beating the bushes and certainly finding some support, but the time is now to cast a wider net to ask for financial support from film lovers of all stripes. The festival has set up a donation page through IndieGoGo where you can contribute whatever amount you wish - the drive is towards $7000 and this money would help pay for numerous costs not the least of which would enable filmmakers to attend in person.

If you love the passion of young filmmakers - whether they continue the traditions of the past or attempt to break new ground - the Shinsedai Cinema Festival is right there with you and is eager to continue to support the art form. If you can find a way to support the festival in return, it would be greatly appreciated. And you also get a visit from the spectre of Toshiro Mifune as he pays his respects to you. Uh, I think you might have to invest in one of the higher sponsorship levels for that little perk though...