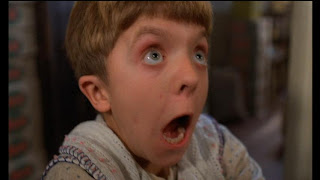 I knew when I started doubling up on these Blind Spot entries that some of the relationships between the films might only be tenuous at best. I also figured that might be half the fun - trying to tease out parallels or commonalities where I hadn't even realized they might exist. For this month's pairing I started with a pretty basic bond: both films have children as their central characters. Nothing more. I'll admit it, I was reaching. But you never know what will spring up upon closer reflection. 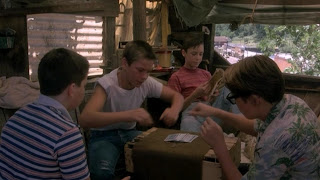 In the case of the 1979 winner of both the Academy Award for Best Foreign Film and the Cannes Palme D'Or (shared with "Apocalypse Now"), it's central character is really only a child for a portion of the film. "The Tin Drum" follows the first 20 years of the life of Oskar from his birth (which we get to see from Oskar's point of view) through to the end of WWII. After turning three years old, he decides he doesn't want to grow anymore and throws himself down a set of stairs. He physically stops growing after this and becomes very attached to his tin drum which he plays so often it requires regular replacing due to the holes he pounds into it. He refuses to give it up just as he refuses to grow into an adult - a terribly hypocritical creature (from everything he has witnessed so far) that he would prefer not to become. 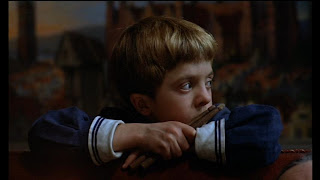 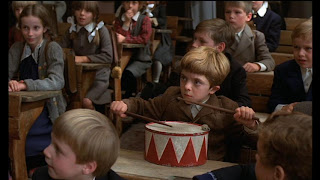 The four adventure seekers in Rob Reiner's 1986 film "Stand By Me" are also trying to hold back their forward momentum towards adulthood. Sure they smoke, talk about girls and are venturing out to locate a dead body before anyone else, but upon closer inspection each boy is concerned about the transition from elementary school into the big bad world of middle school. They fear the loss of their friendship, the challenges ahead and, similarly to Oskar, becoming adults. There aren't a whole lot of good adult or parental role models in either film so there's a strong pull to stay in childhood and stave off the moral swamp that appears to be the natural habitat of grown-ups. Both films move swiftly through their stories due to being structured as a series of scenes - Oskar's across 20 years and the 4 boys over one single weekend at the end of a 1950s summer - that build towards character changes and moments of self-realization. 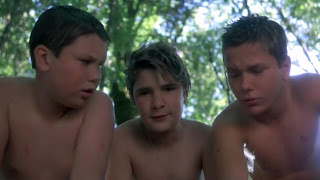 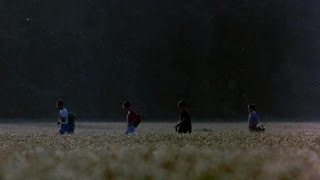 Oskar passes through a wide variety of hurdles - bullying, first love betrayal, sex, knowing about his mother's affair with his uncle - and continues to drum away refusing to join the ranks of the adults. And given what he sees all around him, why would he? In particular (and talk about hurdles) the creeping influence of Nazism pulls in his father while his uncle remains on the outside. The story takes place in the "free city" of Danzig (now known as Gdansk) which was neither Polish nor German at the time (due to terms from the treaty of Versailles) and though there has always been a good standing relationship between Oskar's father, uncle and mother (almost an agreement that the affair could go on), things begin to splinter. Oskar's mother retreats, his uncle is marginalized and Oskar eventually joins a troupe of travelling entertainers (he's 18 or 19 by this time, but still no taller). 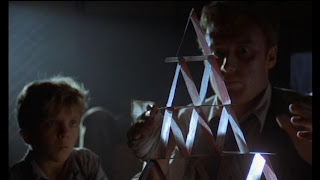 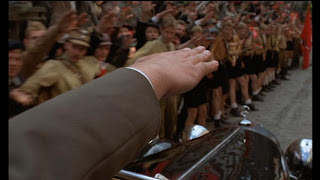 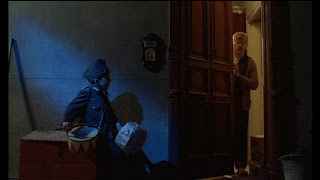 The boys of "Stand By Me" pass through their own set of obstacles as they journey alongside the rail tracks to the location where they think a dead body may be found. It's a far more compressed timeline than Oskar's story of course, but they all have their own trials and tribulations to work through as their bonds are challenged, they reflect on their parents lack of support, and wonder how their lives will change when school starts up again. Gordie can't even get his parents' attention since his older brother died (played by John Cusack in flashbacks) and can't see the point of it all. Fortunately, he has friends to try to convince him otherwise - in particular Chris (played by River Phoenix in easily the best performance of the film) who insists that Gordie will be the one to escape from their small town and make it as a writer. 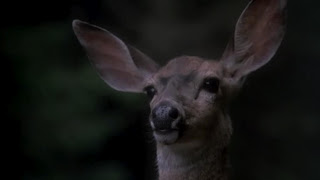 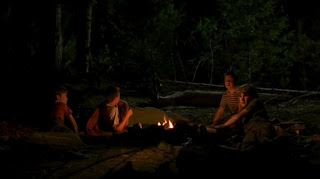 While "Stand By Me" works in a gentle nostalgic tone within its episodic structure, "The Tin Drum" prefers to play in more surreal waters. This meshes well with the huge wide eyes of Oskar (played by 12 year old David Bennent) and the entire lead up to WWII. One of the best scenes in the film is an early Nazi rally in Danzig that pulls in the whole town. The local leader quips that the Germans had to teach the Poles to read in the first place (which elicits a chuckle from a small boy - a subtle way of showing the indoctrination of the young) and there seems to be little resistance to ideas being thrown out. As the speeches wind down, the fanfares start and the assembled crowd waits for a guest of honour (a ranking official in the party), Oskar slips under a set of bleachers and starts to loudly play his drum. This has the effect of slowly changing the band's music to a waltz and the crowd shifts from giving the one armed salute to dancing with each other and blocking the path of the arrived guest of honour. The film plays many of these scenes broadly to get its satire across and becomes very effective at it after a rather fractured first 10-15 minutes (it may take a while to get your bearings as you piece together the location and character relationships). It's none too subtle sometimes as when Oskar talks to a circus performer about his ability to shatter glass with his screams:

As Oskar tries to find his way, he wonders if he'll ever reach a point where he can comfortably be himself and have others accept that.

"Stand By Me" plays things much more straightforwardly. Though I'll admit that it didn't work completely for me, the film does have a lot of charm to it and easily transports me back to my own "off in the woods" adventures when I was a boy. That freedom to explore and take risks is integral to the film and some of its best scenes. The crossing of the long train bridge (and subsequent arrival of a train as they reach the midpoint) is the most recognized scene for good reason. There's enough involvement with all 4 of the kids by this point, so you've been caught up in their adventure. As well, let's face it, you can't help but imagine yourself on that same bridge and wonder if you could out run that same train...The development of the characters is handled well and their back stories come up in natural fashions. The film stops a bit dead in its own tracks whenever it flips to the story of the older bullies who are searching for the same body since there's really nothing of interest in this arc and nothing new in any of the stock bully characters. I can see why they were somewhat necessary in the plot to create that final showdown and tie back to the film's title, but I can't help but wish that the film stayed solely with the kids. Though they aren't always completely interesting as their twelve year old selves (their in-jokes, etc.), at least they feel like very honestly written characters who stay true to their nature and to themselves. 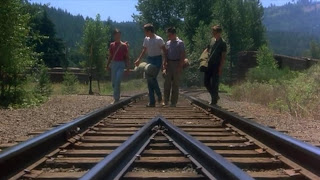 This sounds like a pretty interesting double bill. I had not heard of The Tin Drum before today. I will have to keep an eye out for that film moving forward.

As for Stand By Me, I hold it in the same high regards that I hold the television show The Wonder Year's. My love for the film is partly do with my nostalgic memories of watching over and over as a kid. I agree that the events in the film are rather episodic but it worked overall for me.

Hey Courtney...Sorry for the delay in responding - I am getting ridiculously bad at answering comments.

I have no problem with the episodic nature of Stand By Me, but it just felt like it was missing a little something to put it over the edge. Since I'm waaaaay older than most people are when they see it for the first time, maybe that's understandable. I didn't get a chance to watch it with my son, so maybe when we sit down with it at some point, I'll get a different feeling...

The Tin Drum has a great surreal feel to it, so if you like things just on that edge, you may enjoy it.