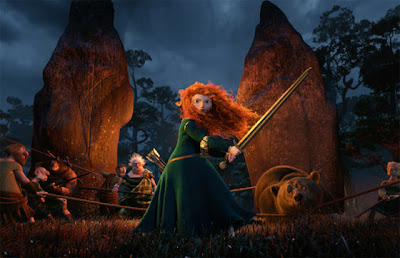 Also published as part of a combined review of the film at RowThree.

A lot has been made of Pixar's latest film being the first of its slate to centre around a female protagonist. A great deal has also been written about how stunning it looks (even in comparison to the rest of its brethren) and about all the new proprietary technology that had to be invented just in order to render out all the graphics. All true. In the wake of its initial screenings, there has also been a fair amount of chatter about how the story is a bit of a letdown, somewhat generic and how the film is simply ordinary. That, I must say, is a load of shite.

Perhaps it's just a wee bit of my Scottish heritage getting its back up, but I thought the film a wonderful mix of adventure, magical fantasy and gentle humor all of which was in service to the set of themes of the story - the main one being clearly spelled out: you can control your own fate, if you're brave enough to try. However it wraps this common sage advice into a mother\daughter story that not only shows the push-pull of a parent-child relationship where each is far more similar to the other than they would ever care to admit, but also highlights the importance of real communication. Set in the Scottish Highlands, Queen Elinor has been raising Merida to take on duties of a princess and to eventually marry one of the first born sons of one of the leaders of the other clans. Her father has helped to bring peace to the previously warring clans and the selection of the proper suitor for Merida is one of the ceremonial acts that keeps the clans together. If you've seen a single image of the film, you'll already know that these plans do not coincide with Merida's, but neither mother nor daughter will give an inch since they never really listen to the other. This sets up Merida's big act of rebellion at the archery contest where the young men try to win her hand. When that fails to get her point across, she takes more drastic measures.

It's certainly the act of a petulant know-it-all child, but the character of Merida has already been given enough time with us that we can't help but forgive the act. It helps that she's voiced by Kelly MacDonald, who easily manages the range of emotions of a teenager but can also handle the tough authoritative voice of a young woman (and a single instance of "Shut it!" that even quieted down several of the more talkative youngsters in the audience). Though Billy Connolly and Emma Thompson are also terrific as her parents, MacDonald is fantastic as she has the bear's share of the work and her voice really fits those ravishing locks. That flaming orange hair is certainly the signature of the film, but its landscapes, lighting and detail are all equally impressive. If it's too obvious to state that a Pixar film looks gorgeous, it doesn't take away from the fact that it really does. I should also address the 3D - it's totally unnecessary, but also one of the best examples I've seen of using the medium to provide depth of space. And it didn't even give me a headache...

As a whole the film has much more of an old style Disney feel in its approach to story as well as humour. Much of the humor in the film has been seen before - typical animated facial reactions and such - and comes less from the comedic abilities of its voice cast and more from character and physical action. As the story goes on and the characters grow fuller, it feels fresher. And so does the approach towards the film's messages. Brave manages to stretch the several different themes it has (responsibility for one's own actions and fate, finding bravery within you, communication) to bring forward a very contemporary take on our specie's ability to talk over each other. Brave posits that to really understand the other side of an argument or point of view, you must swallow your pride and the natural human desire to feel superior. To truly listen is to accept that you might be able to learn something new, alter an opinion or even admit that you might be capable of being wrong. It's not that difficult to do - maybe just a little scary the first time you try it. That twist in the middle of the flick just totally bothered me and I couldn't get past it. Still, I enjoyed this flick, I just think that Pixar dropped the ball on what could have been amazing. Good review Bob.