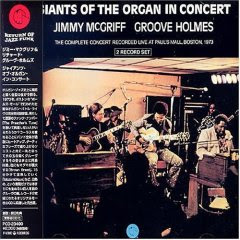 Jimmy McGriff & Groove Holmes - Giants Of The Organ In Concert


Hammond B-3 in all its dirty, squonky, live glory. Complete with some funky and sharp guitar licks. There's no cheese filling here - no lounge-y remakes of pop hits, no ballads and nothing that makes you think of an old 60's TV theme. I'm not sure if this is still available via CD, but the wondrous emusic.com had it available for download, so I shnagged it. Yes, even MP3 versions of these songs cook and ooze the analog feeling of the organs.


A John Frankenheimer film from the late 60's takes you on the Formula 1 circuit to experience the lives of several drivers. The real grabber here is the racing footage...Tremendous stuff that I don't think has been duplicated since. Frakenheimer gets his cameras into the actual F1 cars, intermixes real footage from real F1 races they followed that year and even incorporates small roles for the actual F1 drivers. Stars James Garner and Yves Montand did their own driving after extensive studying with professional drivers and this pays off in a big way as you get a solid feeling these guys were really driving (and they were).

It's long and the romances off the track slow it down occasionally, but when the story gets back to the drivers' racing woes and wins it makes for fine viewing.


A modern Film Noir, complete with deadpan conversations, quick verbal sparring and a language all their own. Plus, it's set in a high school with high school kids. This doesn't work for some people, but I bought into the concept and loved the end result. Not just the plot and its headlong plunge into the fates in store for the characters, but the visual flair and plain fun of its style.


The closing chapter of Chan-wook Park's Vengeance Trilogy. Can one woman find solace or even simply closure in her years long quest for vengeance? Decide for yourself as you watch this incredible piece of celluloid which is at turns funny, gut-wrenching (the scene where she convinces other victims to help seek vengeance can be difficult to watch) and simply beautiful to look at. It's a complete work of art and has become one of my favourite all time films. Don't miss the other two films in the trilogy ==> "Sympathy For Mr. Vengeance" and "Oldboy". Remarkable films from Korea.


I wanted to include a category that was for the fringe "What the heck was that I just saw?" type films. No better place to start than Steven Soderbergh's 1996 film Schizopolis. Somewhere between the indie success of "Sex, Lies And Videotape" and winning an Oscar, Soderbergh threw together (with help from friends and little to no backing) this odd assortment of loosely tied skits and characters that represent, um, well I'm not completely sure...But the sheer absurdity of most of what happens here is a lot of fun if you don't take it seriously. Occasionally you also find some rather intriguing ways that Soderbergh attempts to get some ideas across. Soderbergh stars in parts of the film as 2 different people, one whom is married to a woman (played by his ex-wife) who is having an affair with the other. The rift in their communication is made clear using several different devices (one of which is Soderbergh's character suddenly speaking only in Japanese).

A patchwork of fun, odd and sometimes meaningful pieces of dreams. Or perhaps pretentious noodling. Your call...
Posted by Bob Turnbull at 23:09