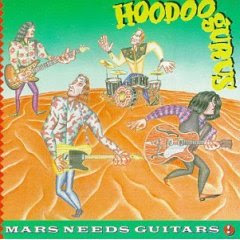 
One of Australia's finest power pop exports, the Hoodoo Gurus delivered their best (well, IMO) set with their second full length release. Riffs and hooks abound throughout this album and almost always done with a sense of fun. Lyrically they ranged between silly and inspired cleverness and never came up dull. I think I actually "discovered" these guys while watching MuchMusic one day (when it was watchable and actually touched on the subject of music) when they played the video for their surf tinged single "Like Wow Wipeout". Though they broke up in 2000, it looks like they are back together, touring and have a recent album out (as yet unheard by me).


Probably my favourite Western of all time. Two drifters wind up in the middle of a lynch mob and side with those pleading for calmness. The mob wants revenge though and no one seems to care about facts when the goal is quick "justice". All handled in an economical 75 minutes, this is a remarkable study of flawed humanity (both individual and group). Many people also consider this film to belong to the Noir genre. Though I don't think it hits the standard requirements of Noir, it certainly has some beautiful stark cinematography as well as a sense of foreboding throughout.


Solid documentary of the mayoral race in Newark New Jersey from a few years ago. Fascinating yet quite depressing to see both the political system and the electorate abused in various ways. It's actually actively frustrating at times, in particular when you see many voters simply ignore what's right in front of their faces in order to stick with "traditions" and buy into stock platitudes.

Riding Alone For Thousands Of Miles
(2005)


Zhang Yimou is one of my fave living directors. After many beautiful simple human stories starring actresses like Gong Li and Zhang Ziyi ("To Live", "The Road Home", etc.), he moved to stunning visual pieces like "Hero" and "House Of Flying Daggers". Before moving to another visual spectacle ("Curse Of The Golden Flower" - great looking, but one of his least enjoyable stories), he put togther this little gem of a film. A father trying to re-establish contact with his dying son, travels to China to find an opera singer. Along the way, through other relationships he builds (in particular with a small boy) he develops the greater understanding of his son that he always wanted. Very touching and, as with most of his films, human.


In the early 90s Werner Herzog compiled some astounding images of the burning oil fields of Kuwait. Instead of doing a straight up documentary about them, he instead cast the images into the framework of a sci-fi tale. The running commentary over the images is sometimes goofy, but really underscores the completely alien feeling of seeing these enormous fires over a blackened landscape. The footage is at times jaw dropping and the lack of additional voice over narration (to explain the context of what you are seeing) manages to make it all the more unsettling.