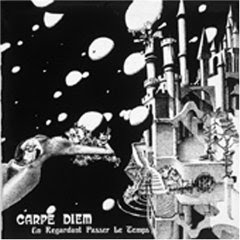 
Prog that pulls in the best parts of the "serious" French bands, the sweeping classical feel of the Italians and bits and pieces of prime Genesis. There's a slight jazz feel to it at times as well because of the sax/flute combo, but again, it uses the best parts of the fusion aspect to keep the music engaging and thoroughly entertaining. Their second album "Cueille Le Jour" is equally good.


Arthur Hiller's late 70s comedy is one of the funnier films from that decade. Peter Falk pulls his future in-law Alan Arkin into some government spy business and the lunacy begins. It never gets too over the top silly though. The more panicked Arkin gets, the calmer Falk gets. You'll also never think of the word "serpentine" in the same way again.


A Canadian film that isn't overly earnest? Yep, it's possible...A young psychiatrist has trouble sleeping and begins to get deeply involved in the lives of three patients from his encounter group. Things get complicated as the patients begin talking about "repeaters" and the psychiatrist tries to help each of them with their Post Traumatic Disorders, all the while trying to cope with his wife leaving him and getting through to his young daughter. The mysteries mount up and the resolution is handled quite nicely and unexpectedly.


A true classic just recently on DVD. One of the absolutely most beautiful films I've seen. A visual cornucopia (if I may be so bold as to use that word) of images, colours and shades of light. A feast for the eyes. Oh, pretty good story too...B-) A young Italian Fascist wants nothing more than to conform with society and do what he is supposed to do. His party sends him on a mission to kill his former professor (a radical) as the young man deals with a new wife and potentially a new lover. Again, simply outstanding cinematography raises an already good story to lofty heights.


A detective is on the trail of several similar murders that seem to have been committed by different people who seem to be otherwise completely normal. They have little memory of why they did it, but all share having met a young amnesiac. His tendency to ask everyone he meets who they are in slow steady repeated ways seems to almost hypnotize them. Is he implanting murderous actions? Just getting them to act on their innermost desires? A very intriguing and thought provoking mystery from Kiyoshi Kurosawa.
Posted by Bob Turnbull at 00:22