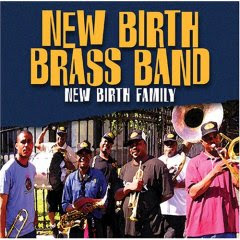 
The term "rollicking" was invented for this album. It's great fun in a Dirty Dozen Brass Band vein, but the singing is less forced and rough and there's an overall more jubilant mood. Gospel mixes with funk and the groove is so steeped in New Orleans that you can't not shake to it (I love double negatives). The band is essentially all horns and percussion and they have fun with it (eg. interpolating a bit of Stevie Wonder's "I Wish" in "Who They Want"). If there's a common element in music coming from New Orleans, it's a joy of living.


In the late 40's and early 50's the British Ealing Studios created a number of gentle satires, many of which starred Alec Guinness. This is one of my favourites. Guinness plays a young scientist who develops a clothing material which cannot ever be stained and never wears out. After the initial rush of the discovery both management and the union realize that this new material is bad for business. The humour is low-key but consistently funny throughout and Guinness plays naive perfectly.


One sign that you've hit upon a good documentary (or at least an interesting one) is how often your jaw drops to the floor or you say out loud "Holy crap!". There's a moment somewhere in "Mr. Death" - after Fred Leuchter takes us through the many execution devices he has built for prisons and how he accidentally got involved in this career - that simply came out of nowhere and leads to the "Fall" portion of the film. It's a fascinating portrayal of a man who desperately wants to be recognized and considered an authority and achieves this through incredible wrong-headed means...


Superb take on a time in Japanese history when samurai were "out of work" due to peace and the different clans being essentially split up. One such samurai asks that he be allowed to commit ritual suicide on the grounds of a lord's property. But it's not that simple...Beautifully composed and filmed, I found the story quite riveting. The director's name is Masaki Kobayashi and he has a keen sense of human qualities that make for sympathetic characters. Two of his other films ("Samurai Rebellion" and "Kwaidan") are equally excellent and also contain beautiful and even stunning cinematography.


Enormously entertaining Vincent Price film filled with colour, multiple ingenious murders and lots of organ music. Price doesn't actually so much act as glower for most of the film, but there's a definite tongue planted in cheek. The revenge murders on a group of doctors become overly elaborate at times as they each are designed to mimic one of the Biblical plagues.
Posted by Bob Turnbull at 01:43