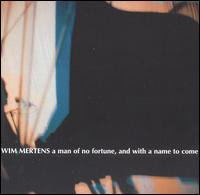 
I'm not usually a fan of solo acoustic recordings or shows...I like my rhythm sections and full sounding backing bands. But this 1986 live recording by Belgian composer Wim Mertens is certainly an exception to this not overly strict rule. It's the only music I've heard by him, but after revisiting this album for the first time in years I'm gonna dig into more by him. His lovely simple and sad melodies (including his very high pitched vocals) combined with the minimalist style of repetitive piano lines makes for truly engrossing music. The opening track "Casting No Shadow" is the closest thing I've heard in some time that could be described (without feeling silly for having said it) as being "achingly beautiful".


Writer/director Preston Sturges is known for developing very clever, witty dialog for his characters while having them be exposed to quite farcical situations. Probably never better than in "The Miracle Of Morgan's Creek", but I have a soft spot for this later 1948 film. It's the story of an orchestra conductor who believes his wife is cheating on him and fantasizes on 3 possible revenge scenarios (while he conducts 3 different pieces). His later attempts to make good on those fantasies break down into trademark slapstick routines that are just as clever as the back and forth banter throughout the film.


I should write volumes about this gloriously beautiful film, but I could never do it justice. Just the visuals alone are remarkable and make me wish I had seen it on the big screen. The story is really about a man trying to cope with his wife's terminal illness and accept that death is a natural course of events. This theme is rendered via three separate stories that take place in the past, present and what appears to be the long distant future. The overlapping story elements and parallels are indicators that perhaps not everything should be taken at face value, but even if the pieces don't quite fall in place (I watched it twice in a row and still need to tie up some "loose ends" in my mind), it's a brillantly made movie that will certainly get you thinking. 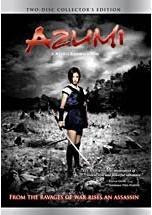 
Reading through the posts to the Action Heroine Blog-a-thon (hosted by The Film Experience), made me think of this fun action film based on the manga of a young girl raised (with other orphans) to be an expert assassin. As they reach young adulthood, they are assigned to kill three warlords who are threatening to tear apart the country. She and her friends face a number of different obstacles and challenges, but it's Azumi who emerges as the leader and one of the greatest warriors the land has seen. There's some silliness and effects that aren't quite perfect (and buckets of really red blood), but since the young Japanese pop star Aya Ueto plays Azumi with such confidence and charm it actually adds to the fun of the adventure - as do the myriad of over the top characters she encounters.


Revenge. That's all the beautiful Matsushima has her sights set on once she has been double crossed by her detective boyfriend, raped and sent to prison. And though she still has to endure a great deal more within the women's prison, nothing will stop or break her as she simmers away. Indeed there are some fairly brutal things that happen to her and some way over the top acting by other prisoners and the guards, but Meiko Kaji's central performance as prisoner 701 has you with her all the way hoping that she will get a taste of that revenge in the end.
Posted by Bob Turnbull at 10:37