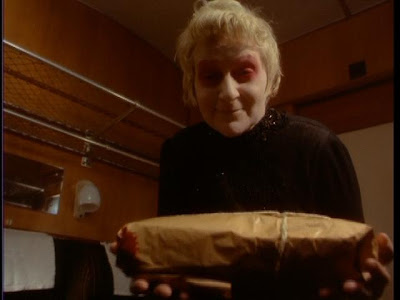 The Werewolf Vs. The Vampire Woman (1971 - Leon Klimovsky) - I happened to stumble across one of those cheap "10 movies for $9" sets, so I snagged it based on a few of the titles it contained. One of which was this apparently multi-pseudonymed movie ("Walpurgis Night", "The Werewolf's Shadow", "Blood Moon", etc.) with promises of an epic battle. It was a crappy print and cut to the old standard TV size, but still had some decent moments and was mostly fun outside of the really slow parts. But it wasn't until I saw Arbogast's screencaps did I really see how good this might have been with a better print. Man, I gotta track that down...Don't get me wrong, this is still B movie cheese filling, but I couldn't help be entertained by the oddly paced story and the very lovely vampires (even with my poor resolution). That epic battle, by the way, lasted all of 3 minutes. 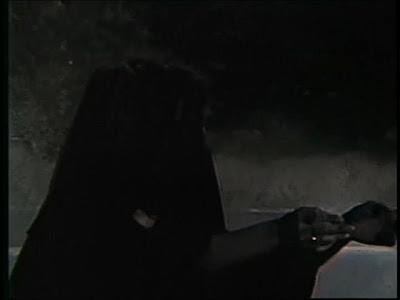 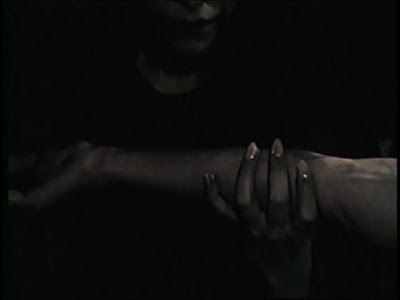 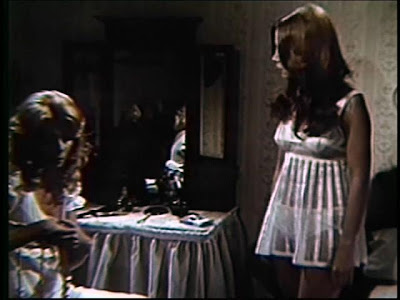 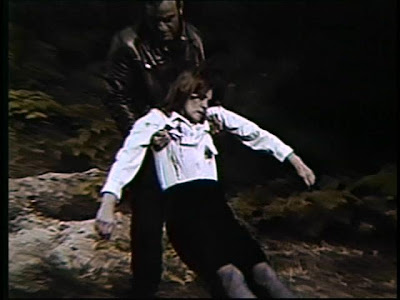 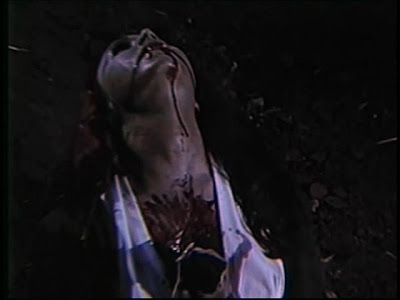 Frightmare (1974 - Pete Walker) - I love these little 70s horror gems that just seem to pop up on my radar from time to time. For some reason, when this came to my doorstep, I thought it was an 80s flick (ala "Fright Night" - which would've been just fine), but it's a much slower burn than that style. Filled with really strong performances, wonderful setups and framing, it winds up with a final forced decision on one person's part that is the most horrific thing in the whole story. It's based around a couple who are sent away to an asylum due to the predilections of one of them - specifically, Dorothy likes to eat the brains of her victims. Years later, the couple have been released, live on a remote farm and their daughter and step-daughter live in the city. But Dorothy is getting hungry again... 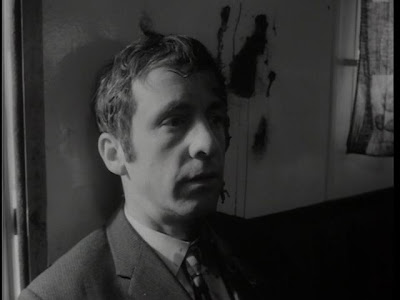 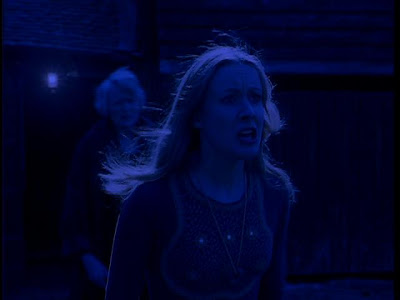 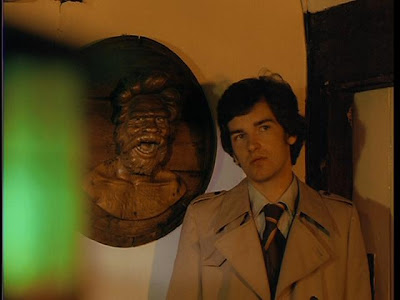 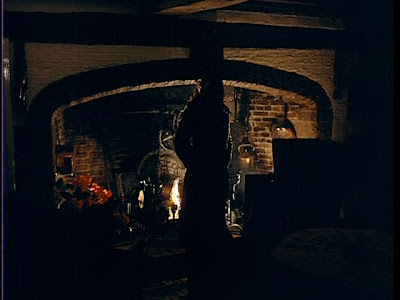 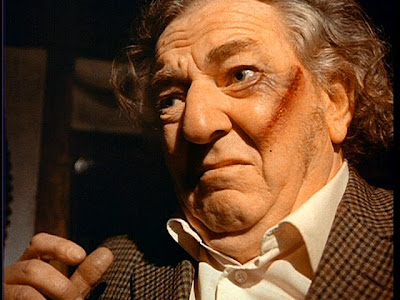 Screwed (1998 - Teruo Ishii) - Opening and closing with dark orange hued, grotesque bodies writhing on a beach in some hellish orgy, Teruo Ishii's adaptation of a manga by Yoshiharu Tsuge is a feverish waking dream. After a suicide attempt, Tsube begins to wander about and come into contact with several different women. Each meeting seems to up the sexual ante between Tsube and his contact of the moment: a guest hostess at his first lodging establishment who tries to seduce him (he pulls away); private visits with a stripper who warns him of the depression pills will cause while also admonishing him because he won't look at her; an experienced woman (ie. used) that he claims is not his type because of her wantonness (though he allows himself the thought of having rough sex with her). Towards the end, after managing to acquire a very nasty jellyfish wound on his arm, he acquires some "help" from a woman gynecologist who believes she can fix him. That's pretty much the entire film. Of course, it's loaded with images and symbols with which a psychoanalyst would likely have a field day. The bevy of phallic and yonic references add to the crashing waves, pouring rain and little trains that could (or could not in this case). Ishii was 74 years old when he directed this and I can't help but imagine him chuckling away while thinking of all the different things he could drop into the film. In particular is that gash in Tsube's arm which leads to a unique form of "screwing" as a cure. The cast is fine, but the characters are just ciphers - simply there to work through one man's detached and disillusioned feelings towards sex and relationships. There's not a whole lot of emotion on view here, but it's still an interesting ride. I can't identify with Tsube and I'm certainly happy not to, but it's still an engaging enough look at how an individual can separate themselves so completely from emotional attachment. 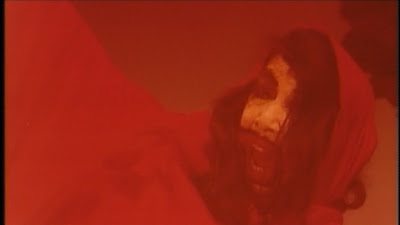 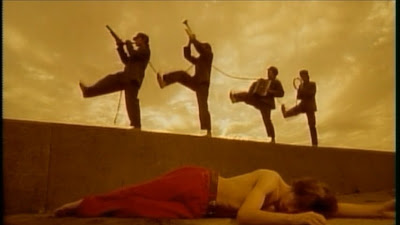 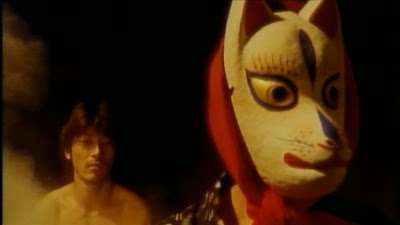 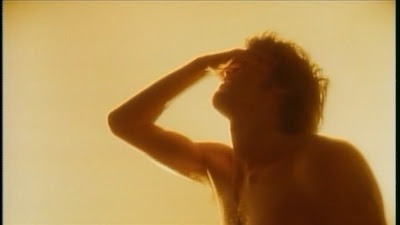 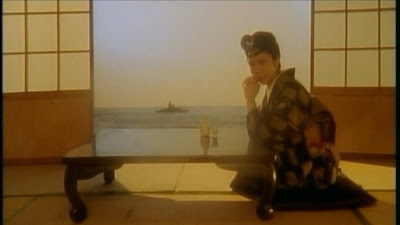 Paperhouse (1988 - Bernard Rose) - A young girl's dreams can be pretty scary - especially when she's suffering from a fever, has raging hormones and doesn't quite know what to make of her absent father. While not exactly a horror movie, Rose's film builds its dream sequences (all based in a house that young Anna has drawn on paper in her waking hours) carefully and creates a mood that is always uncertain and a bit dangerous. It's quite effective at getting across an on-the-cusp-of-adulthood girl's view of her world. It's always teetering on the verge of collapsing like a, well, like a paper house. The film does have a couple of problems though. The biggest is Glenn Headley's looped dialogue in which she uses a British accent. It's painfully obvious that they filmed it with her normal speaking voice first and then got her to redo all her voice work as a Brit. It really pulls you out of the film and simply isn't necessary. The second problem is a single scene in the middle of the movie where both Anna and her Mom frantically search for a crumpled up picture of the house through garbage bags on the street. It plays completely differently than the rest of the film and was really pretty painful to watch. However, to end on a positive note, everything else is engaging, occasionally creepy and quite lovely to watch. Rose went on to direct Candyman several tears later, so I'm surprised this film hasn't got much more attention. 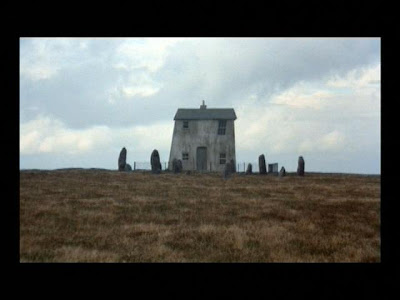 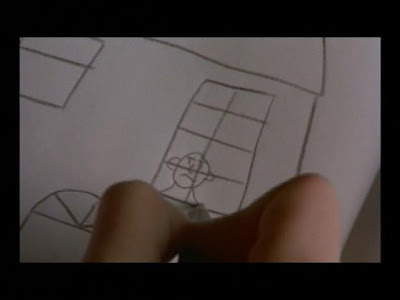 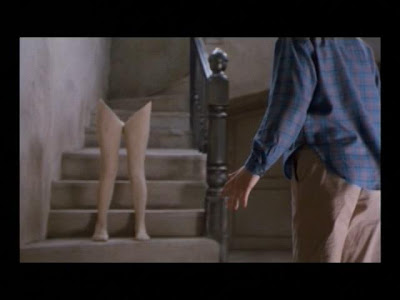 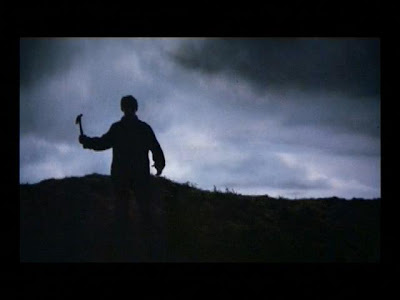 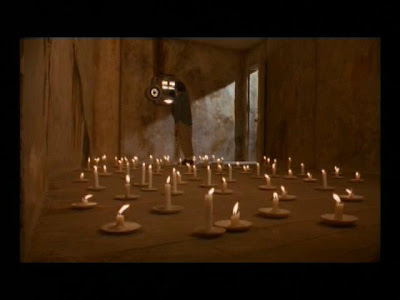 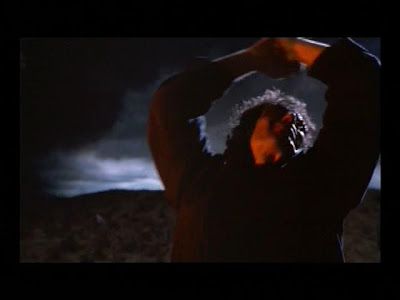 Gong Tau: An Oriental Black Magic (2007 - Herman Yau) - Director Yau (according to IMDB) has 48 credits to his name in the last 16 years. So at a rate of 3 directorial jobs a year, you're bound to have some fluctuation in what works. This particular production falls somewhere below the line...While investigating the murder of a fellow policeman, a detective's wife and child are subjected to Gong Tau - an ancient form of black magic - by a mysterious presence. The child dies, his wife is half insane and confined to a hospital and the detective has to grapple with his past in order to solve all the mysteries hanging over him. It all doesn't quite work, even if Lau does have a good eye for scenery and colours. The actress playing the wife gets a really terrible role - all she does is whine and scream and cry and moan. Granted, if I was cursed by some black magic, I'm likely not going to be skipping down the sidewalk humming a sunny tune, but it makes for a great deal of irritation whenever her character is on screen. The tone of the rest of the characters is never quite right either. Is this a world where black magic is accepted or not? I couldn't quite tell from the different reactions. It all ends in too much coincidence, too much silliness and far too much ambivalence towards the characters. By the way, if you think Yau's output is significant, one of his actors in the film (Suet Lam) has been in 100 films in the last 10 years. I see the guy everywhere (if you've seen a Johnnie To film, you've seen this guy)... 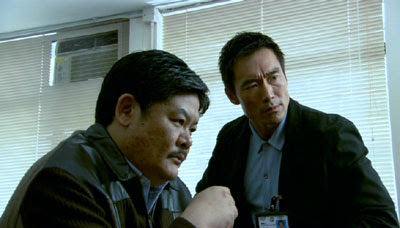 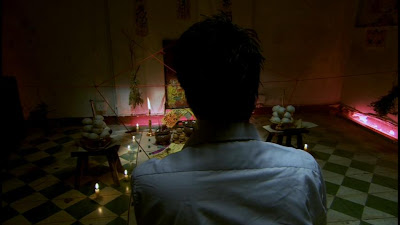 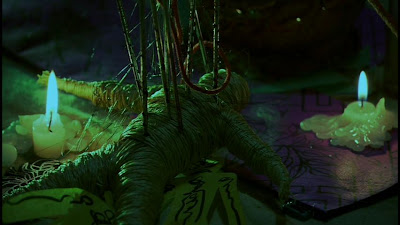 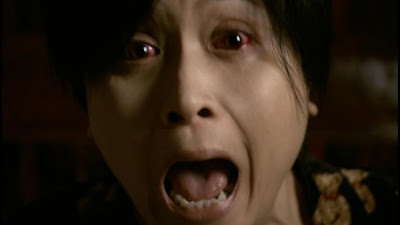 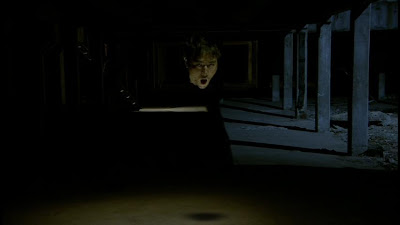 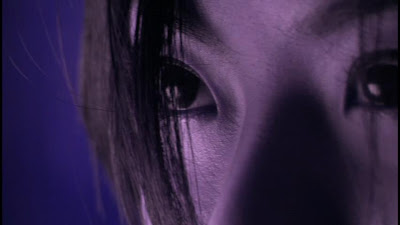 I just wanted to express my appreciation that your survey of horror films went beyond the usual Anglo-Hollywood fare that most of the other writers have covered.

Lam Suet might currently be the hardest working man in show business.

Thanks Peter...Man, there's just so much out there, I'd be crazy to limit myself. I am a generalist at heart though, so sometimes I spread myself too thin...

I still feel that I haven't quite got the broad coverage I wanted. I haven't really touched on French, Spanish or Thai horror this year. I'll see if I can work those into November...B-)

Oh, and Lam Suet must be insanely busy. I guess they turn around the projects pretty fast and he rarely has a full starring role, so he can probably juggle 2 or 3 productions at once. He was also in "Accident" which I saw at TIFF (never got around to writing about it though).