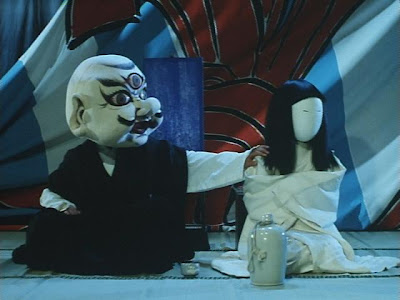 "Your lips look delicious. I like festivals. Fireworks excite me."

I love films that play in the surreal - that dream-like space that disorients the viewer and leaves them a bit confused as to what they've just seen. Used effectively, it can evoke mood and subtly impart information by taking advantage of the visual medium in many creative ways. So I looked forward to "Kagero-za", Seijun Suzuki's 1981 middle film of his Taishi Trilogy, since it had been described as quite surreal. That doesn't cover the half of it - it's a downright fever dream. 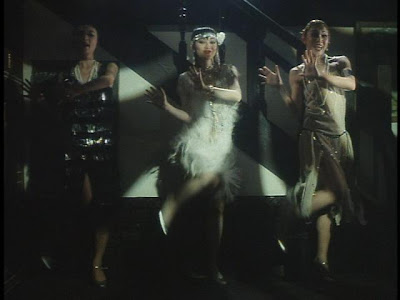 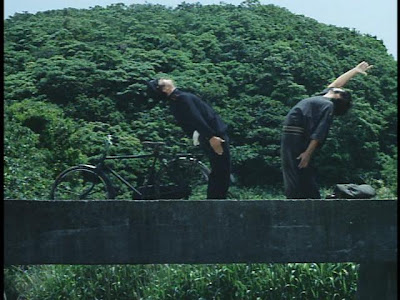 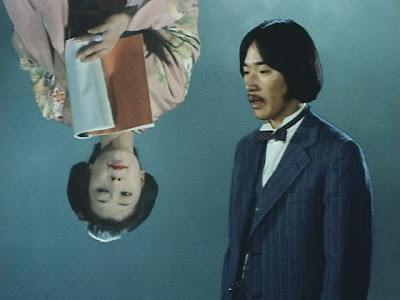 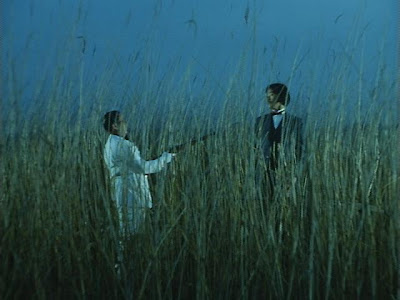 I make the distinction because the film is more than just dreamlike or slightly disconnected from reality. "Kagero-za" is full-on delusional, doesn't process or provide information in a normal fashion and shouldn't be trusted with sharp objects. Since this isn't a narrative film, those aren't necessarily objections or criticisms. There is actually an underlying story and concept being put across (based on a short story by Kyoka Izumi), but you can't process it linearly. Instead, as with many Suzuki films but even more pronounced here, you let it drift over you, react to images and moments and then attempt to reassemble things later. Is that the same woman from an earlier scene? Is this a flashback or the next day? Who's that guy? What the hell does that mean (e.g. the quote that leads off this review)? These are all questions that jumped out at me while watching the strange and beautiful images pile up on top of each other. Even if most of them didn't get answered immediately, I found myself fascinated by the journey of the central character and caught up in what sometimes felt like random images and shot choices. But the mood of that journey - the increasingly disturbing, slightly creepy and always unsure feelings - is realized in splendid fashion. 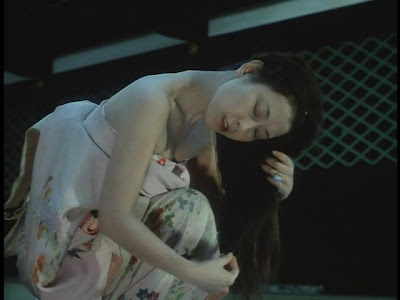 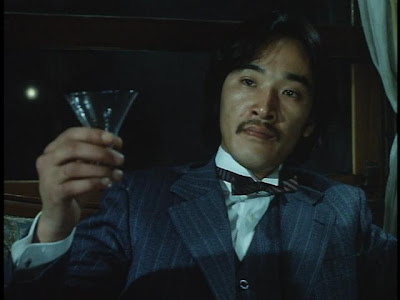 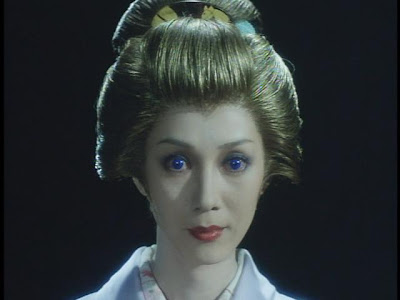 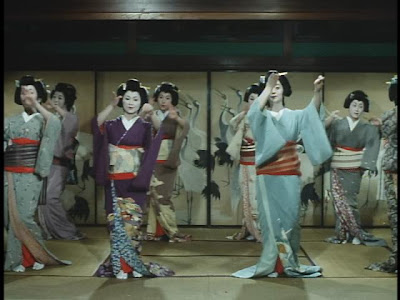 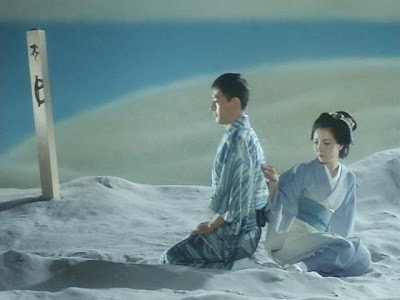 That mood and tone is set early on...While trying to find a letter he has dropped, the playwright Matsuzaki meets a woman who asks him to accompany her to the hospital. She wants to visit a friend, but had run across a vendor selling bladder cherries (the fruit of the Chinese Lantern plant) which are purported to be women's souls. The scene suddenly cuts from outside to inside a building (if it's the hospital, it's a pretty empty and quiet one) where Matsuzaki assures her he hasn't seen any vendors and that she may continue by herself. Instead she decides not to visit her friend and begins to throw several of her flowers to the floor. Another sharp cut back to an outside staircase where petals seem to be spilling from her arms. Matsuzaki tells her that he feels that someone evil has picked up his lost letter. Cut to her basket with a letter hanging out. Cut to a two-shot of them where she tells him that he is a sinful man since it is a love letter from a married woman. She hands him a cherry from her mouth and he asks if he should consider it her soul. In a single shot, we see her leave around a corner and the camera pulls back to Matsuzaki as he tells his rich patron Tamawaki that this all happened three months ago. Things only get stranger as we see his other encounters with the woman, his growing obsessions with her, how Tamawaki fits into all this and his eventual trek to meet her in the countryside. 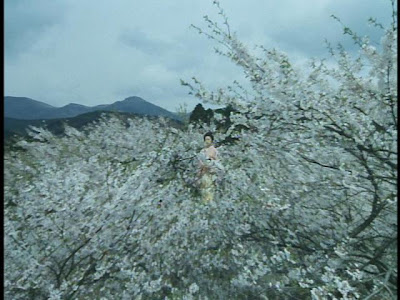 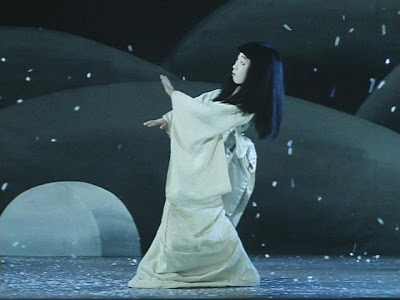 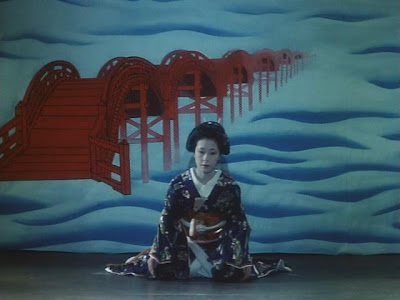 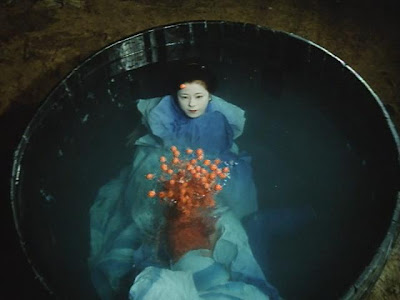 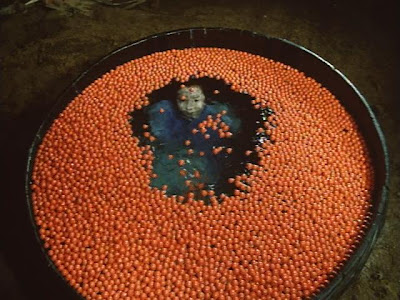 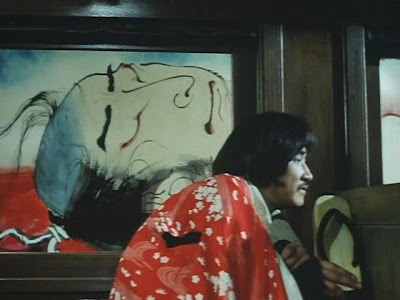 The characters he comes across may be real, imagined or possibly even ghostly in nature, but we're never quite sure. Suzuki uses many lighting tricks, camera angles and editing techniques to give you the perspective of Matsuzaki and keep you just as in limbo as he is. "Kagero-za" had twice the budget of its precursor "Zigeunerweisen" (due to that previous film being a commercial success as well as winner of four Japanese Academy Awards) and it shows in the care taken with the visuals and the feeling of 1926 Tokyo brought to the screen (the Taisho period the trilogy is named for coincided with the beginning of an increase in liberal, democratic and Western ideas entering the culture). More than once my eyes widened and my jaw dropped at compositions, scenes and images and I admit that this was my favourite thing about the film - its moments that at first didn't seem to make sense either in context or even as standalone. Especially as the film moves towards its conclusion (and Matsuzaki's fate) with scenes using dolls, a children's kabuki theatre and stunning wall paintings. It's roughly translated titled of "Heat-Haze Theatre" feels incredibly accurate. 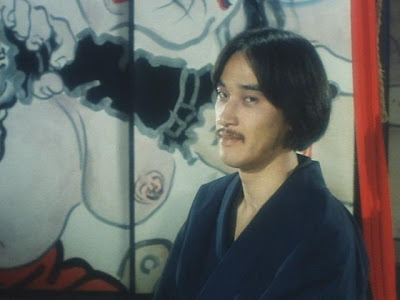 Thanks for the review, and the great selection of screencaps too. I'm a big fan of movies with surreal visuals and this definitely looks like something I need to check out.

Thanks TWISTED...I'd love to hear what you think. It's out there and definitely not to everyone's taste. I'm looking forward to delving into the other two films of the Taisho trilogy ("Ziguenerweisen" and "Yumeji").