Basking In The Cesspool Of Filth #16 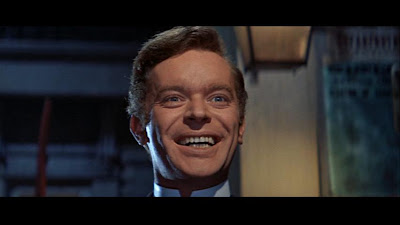 Look how happy he is with his hair...Bastard.


Yokai Monsters: Spook Warfare (1968 - Yoshiyuki Kuroda) - In reviews for the two other Yokai Monsters films made during the late 60s, I mentioned that one of my minor complaints was that there just wasn't enough screen time for the many creative ghostly apparitions that appear on screen. Whatever faults this knowingly goofy and fun-spirited middle movie of the series may have, that's certainly not an issue this time out. As a matter of fact, there's little story or human characters to really get in the way of them all. Here's the basic framework: a long dormant spirit from Babylonia is awakened and makes its way to the shores of Japan; after killing a local magistrate and sucking his blood, it takes his form and sets itself up in his house to bring forth new suppliers of blood; a pesky local Water Imp doesn't appreciate being tossed out of his abode so he gathers some of his spirit friends to battle against this intruder from a far off land. It's pretty silly stuff, but it's also great fun. The spirits actually suffer a bit from overexposure in the film, but when you have a long-tongued umbrella spirit, a snake-necked woman and a creature that can display remote viewings of events on his bloated belly, well, you kinda want them to get as much screen time as possible anyway. The special effects for these part human, part beast and part spirit apparitions are all handled via lighting, camera angles, edits, models, costumes, superimpositions, etc. This is one of the movie's main charms as sometimes the simplest effects can be what's required. The battle scenes between the many Yokai and the newly arrived spirit aren't exactly spectacular, but they still entertain and fit the tone of the film. Considering its kid-friendly nature, slapstick humour is also quite prevalent and the Water Imp is the main focus of many of those scenes (quipping at one point "You Suck, Buddha!"). Even with some bright red simulated blood, these films are appropriate for all ages and - outside of Miyazaki - provide some of the best representations of Yokai from Japanese folklore that I've seen. 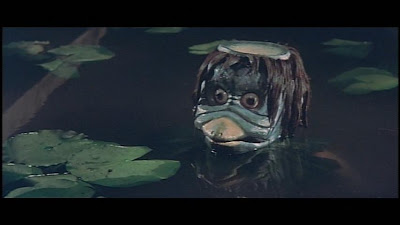 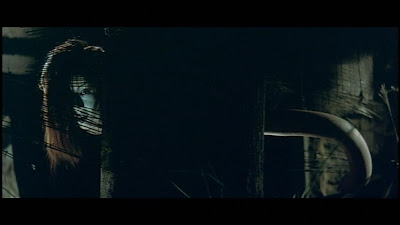 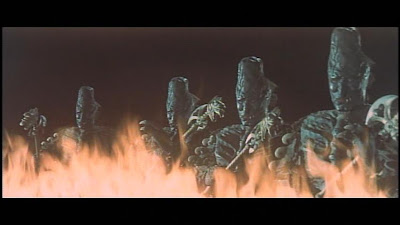 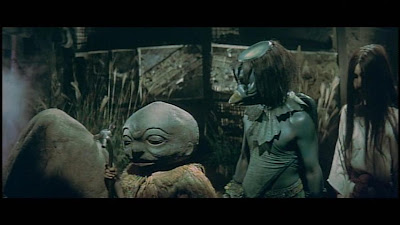 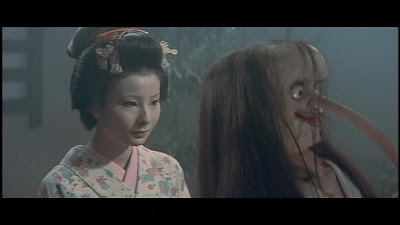 The Seventh Curse (1986 - Hgai Kai Lam) - Well that was odd...This weird mid-80s Hong Kong martial arts, voodoo, adventure, gory goofest feels so slapped together at times that I was sure I had somehow turned on the random shuffle option for scene selections. It settles down a bit once the main plot of rescuing of a young woman from a Thailand tribe begins, but it doesn't really alter the weird factor much. There's a variety of really fun scenes (love that skeleton kickin' some butt), some icky scenes (I mentioned goo, right?), some decent fights and some absolute crap (ie. anything with dialog). The DVD was of dubious quality so it's hard to say if that impacted my feelings towards the film. Could this have fared better with me if I had a pristine version without it feeling like entire sections of the film were dropped? I'd be hard pressed to say yes, but it certainly had its moments. And, of course, it's always good to have Maggie Cheung in your movie...Even when she plays a terribly annoying character (like she does here), I can somehow forgive that. 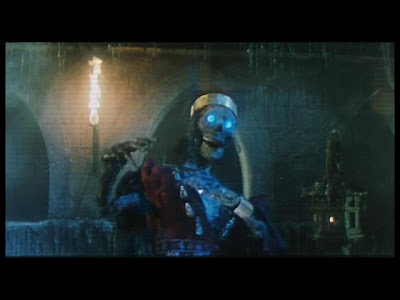 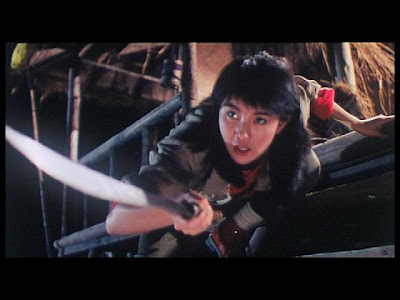 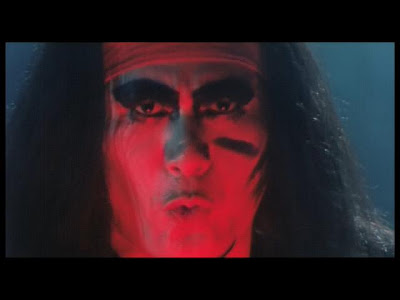 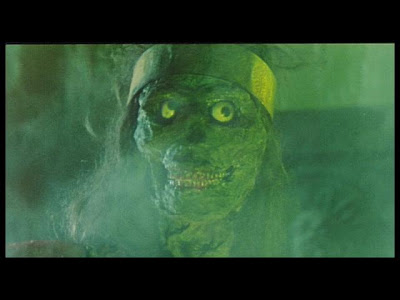 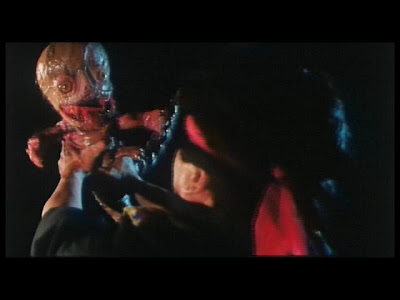 The Two Faces Of Dr. Jekyll (1960 - Terence Fisher) - Hammer continues to get play on my TV since there's just something I find highly entertaining about just about all of their films. Of course, the beautifully lit and wonderfully colourful scenes are a big reason for that, but I think it comes down to the overall approach they take towards their stories. Go big, but never quite go over the top into campy territory. In this case, this allows good old Mr. Hyde to play with his evil tendencies with a sense of abandon, but it still manages to keep the story moving forward and not descend into random silliness (not that I have anything against that either...). In some ways the Dr. Jekyll character (all scruffy, sweaty and pale) is even more of a fright than his clean shaven counterpart since he begins to shun all human contact. Hyde, however, embraces his impulses at every opportunity. 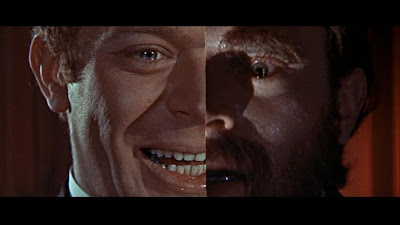 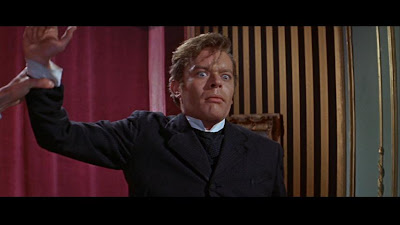 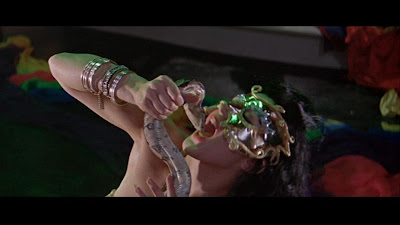 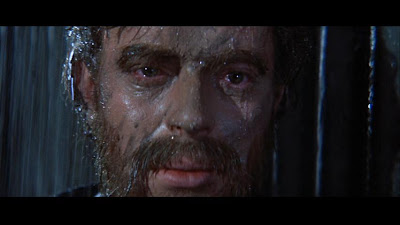 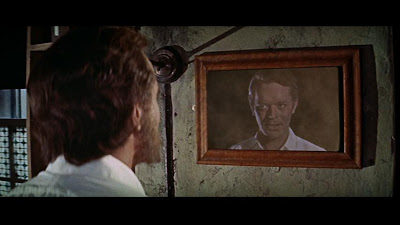 The Hand (1981 - Oliver Stone) - This was the last remaining movie for me to watch from Warner's Twisted Terror Collection (released about 2 and a half years ago). I've kinda taken my time shambling through the six film set, but it's been worth it - two extraordinarily bad (but fun) cheesy films ("Dr. Giggles", "Deadly Friend"), two minor TV-like thrillers that scored a few good moments ("Someone's Watching Me", "Eyes Of A Stranger") and one great Amicus anthology ("From Beyond The Grave"). Turns out that this was a good way to end the set - it's actually quite the solid psychological-thriller/study of a cartoonist who loses his hand in a car crash and then struggles to rebuild his life. It's dark, moody and plays with shadows and light quite nicely. It's occasionally a little slow and doesn't really deliver a great deal of "scares", but that's OK - it never gets overly silly (and when you have a disembodied hand strolling about, you certainly have that as a danger) and Michael Caine is suitably intense throughout. 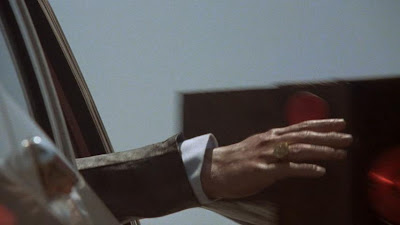 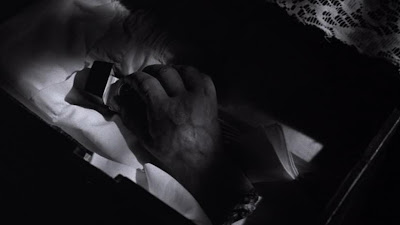 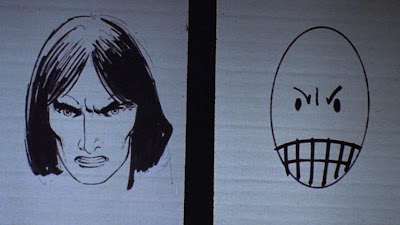 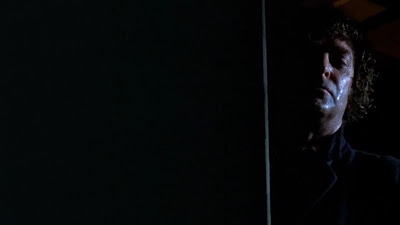 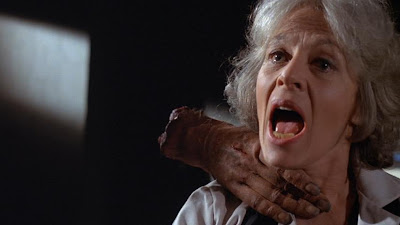