Shame About Ray...And His Hair 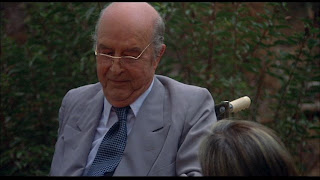 "The Attic" - the only directorial bow from the scribe of the quite spiffy "The Killing Kind" - is a mostly entertaining (if slow) psychological horror-ish warning about the evils of controlling parents. Carrie Snodgress stars as Louise, a mousy librarian stuck taking care of her wheelchair-bound father while she pines for a fiancee who disappeared two decades previous. The great Ray Milland plays her Dad (her really awful, cruel Dad) and I didn't even recognize him initially. His weathered and bald dome seen above actually reminded me much more of my own Dad (my really fantastic, kind Dad). As he continually puts Louise down, he also negates anything good that she may have done in her life and places far too many demands on her. It's wearying watching her slouch through life and Snodgress does an admirable job in bringing that across in her character (except for perhaps a few too many "she's a bit off her rocker" scenes).

So given all that, you wouldn't really expect a laugh out loud moment during a particularly revelatory moment for Louise would you? As we close in on the resolutions of several plot points, though, there's a humdinger of an unintentional howler. The film has a bit of a 1980's made-for-TV feel, but is mostly quite competently made - except, that is, for a moment of confrontation on top of a hill late in the picture. Louise has wheeled her father up to the peak as part of his regular Sunday morning stroll and, as one thing leads to another (and since the film is good enough not to spoil, I won't say what leads to what), her Dad tumbles down the hill - suddenly with a full head of hair... 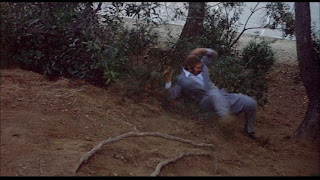 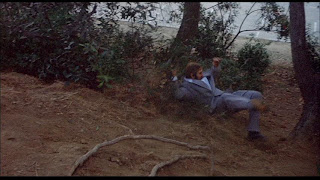 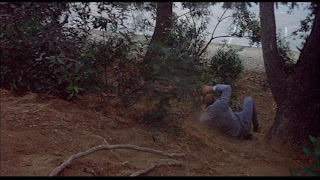 And dark brown hair at that (in contrast to the little bits of grey seen in the screenshot at the top of the post which occurs only moments before the ass over tea kettle trip down the hill)! I totally get why they needed a stunt man since I doubt that Milland (who was 75 years-old at the time and appearing in one of his last feature films) was going to tuck and roll through branches and rocks just to get the shot. But could they not afford a little makeup? Maybe one of them bald "wigs"? Perhaps at least some creative editing?

Then again, I guess I wouldn't have had my belly-laugh for the evening...