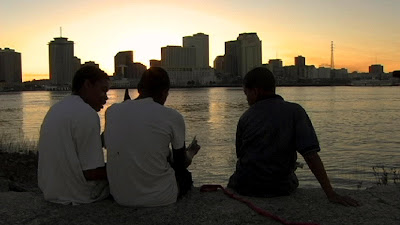 New Orleans is a city vibrant with colour, steeped in music and chock full of fantasy. The streets of the French Quarter are, on just about any given night, filled with feathered costumes, seductive dancers behind window shades and skeletons rattling about in every corner. I daresay, though, that the entire city might not have as many flights of fancy and dreams as 11-year old William does. After winning 6 Superbowls with the NY Giants, he plans to become a lawyer and then shift into architecture. He doesn't think that seeing Michael Jackson live is terribly realistic at this stage, but still holds out hope that he could be the first person to actually fly. The ladies would really love him for that...

William tells us all about these dreams in exuberant tones like only a young boy can. It's refreshing to see the world through his eyes and listen to him still full of life. It's easy to see why the Ross brothers (Turner and Bill) chose him as the central filter for their own dreamy excursion through Century City's nighttime streets: their latest film "Tchoupitoulas" (following up their remarkable "45365"). William and his two older brothers make the ferry journey over from Tchoupitoulas for an evening of walking through the French Quarter with the expectation to catch the last ferry home at midnight. When things don't go quite to plan, they end up wandering the city for the entire night until the ferry gates reopen in the morning to take them back home. The Ross Brothers are along with them for the adventure and document what they see and how they feel. 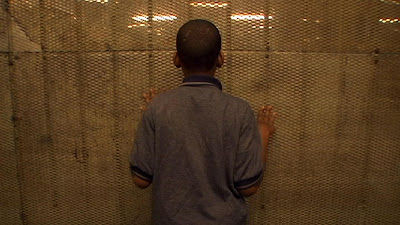 Of course, you may want to use the term "document" a bit loosely here - even though that single evening is the foundation for the film, many of the scenes and voiceovers by the three boys are recorded at other times and merged into one "experience" (to quote the directors). However, if you complain about this, you'd be completely missing the point of the film. It's one of the finest documents of a city I've ever seen. As we meet different characters along the way and as we are surrounded by music (very literally encircled by music from every inch of the city), the culture seeps through to us. The pulse of the city is a wicked funk rhythm and its people are right in step. Not simply as "characters", but as people who have been marinating in this gumbo of a metropolis for quite some time. This includes the clown dancing to a side street accordion player, the fire juggler, the strippers on break singing "Iko Iko", the riffing oyster shucker, the sparkling flute player giving a quick lesson to William and the transvestites dancing on the bar (which leads to an amusing teaching moment between William and his older brother).

The three brothers have that rapport which is instantly familiar to anyone with siblings (and shared by the directors if the after screening Q&A was any evidence). Vacillating between squabbling and boisterous chatter, they gawk, explore and wind their way through the quarter from Cafe Du Monde to Louis Armstrong Park and back. Many of the situations and brief stops in clubs (blues, hip-hop, burlesque) are without the boys, but lend themselves to the overall feeling. The lovely cinematography and very full soundscape do the same and this is where the additional planned footage and post-production piecing together add so much to the entirety of this joyous experience. It's obviously not all laughter and happiness, but the film isn't about portraying the politics and problems of the area - that's for another film and another set of filmmakers. 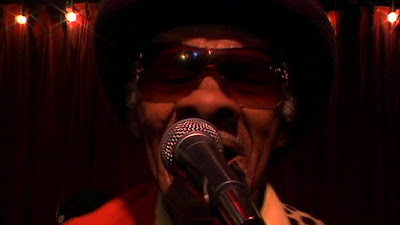 The best sections of the film are with our guides though. When they come upon three young women busking on the street in perfect harmony (I dare you to find a city with better street musicians) playing guitar, violin and saw, William mimes along with his practiced fingers playing what I can only assume would be perfect notes on his invisible recorder. Then there's the deep-into-the-night exploration of an abandoned ferry boat which comes complete with a gorgeous working chandelier, dance floor (where William provides a quick MJ tribute) and possibilities of collapsing floor boards everywhere. It's quite invigorating to join their illicit walk through the crunching glass and dusty rooms. As the Ross brothers stated afterwards: during those moments there were 5 kids on that boat. And finally, the last close-up shots of William's face on the morning after the trek where he sits quietly staring off into the distance looking slightly older and wiser - possibly just thinking about his "girlfriend" or maybe those transvestites, but looking like he's formulating brand new dreams. 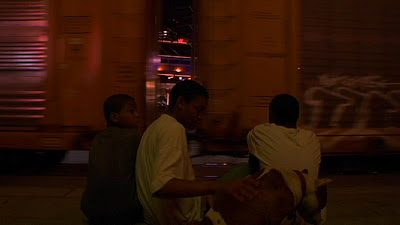