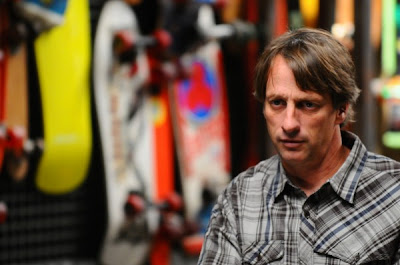 The full title of Stacy Peralta's latest film is both inaccurate and spot on. Many people had the impression - especially if you know anything about the fact that the director also formed the mid-80s skateboard team that is the subject here - that perhaps Peralta was going to centre the documentary around himself and what he did for the sport. From my perspective though - and this was amplified by Peralta's own comments after Tuesday night's International premiere (complete with a packed house filled with "skater dudes") - the title implies that it is the entire team that is telling the story of their rise through the 80s into role models for a distinct set of kids. Peralta was the guiding force behind the team, a part of the company that backed them (Powell-Peralta) and undoubtedly has the reins of the film, but the story is very much driven by the individual members. Each of the core 6 skaters of Peralta's original team were recruited when they were quite young (10-13 years old) and showed promise. They also showed tendencies to be outcasts with a desperate need to belong. Not long after joining the team (by the time most were 15-16), they had become world class athletes.

Though it is the story of the whole team, Peralta's influence is everywhere. Most of the film happens in the 80s after his own professional riding career was over (with several older clips of Peralta in his prime skating era as seen in his earlier film "Dogtown And Z-Boys"), but he's still in a great deal of the archive footage encouraging, coaching and managing the kids. He gets talking head time as well to discuss not only the team, but his business partnership in Powell-Peralta. And of course, he brings his sense of style to his directing duties by adding many cinematic touches to the look of the movie: the talking heads are rarely framed in consistent ways, on screen titles resemble those from old 80s VCR tapes playing in machines that had lost the ability to properly track the image, the music selection always fits the tone and pace of the story, and the content never lags. Like Dogtown and "Riding Giants" (his surfing movie), you do not have to have a single reference point in the history of events or have any nostalgic reverence for the people involved. The film provides an entertaining, oddly emotional and well laid out story with surprisingly interesting central characters. 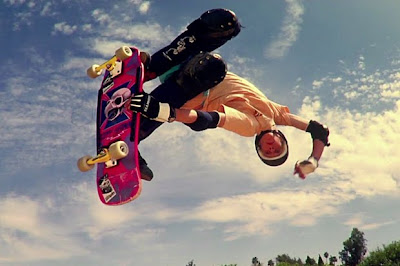 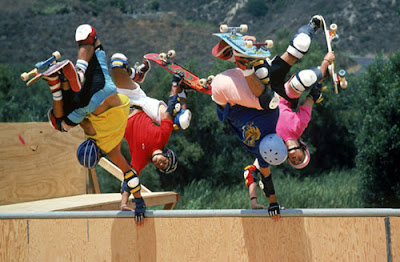 The biggest name of the bunch is likely Tony Hawk due to his fame having spread internationally and outside the skateboarding community (movies, video games, commercials - being a world champion 12 years in a row will open a few doors), but you can't help focus on a couple of other Brigade members: Rodney Mullen and Lance Mountain. Each could hold sway over an entire movie's arc with their backgrounds, troubles and rather different outlooks on what skateboarding means. Mullen revolutionized freestyle skateboarding and created absolutely astonishing tricks - using his board like a pogo stick, balancing on its side and sometimes almost forgetting that the damn thing had wheels - and was the first person to go airborne on flat land without touching the board or using a ramp. Even more fascinating is listening to the stories of his controlling (though apparently well-meaning) father, his battles with the continued pressure to win competitions and his drive to master every aspect of his skating. Mountain, on the other hand, was never going to be a master of the sport. Peralta tagged him early on to be a successor as manager of the team, but until that point he always felt like he didn't quite belong in the rarefied air of his teammates. Though he was the main focus of an early Bones Brigade video release (riding through the streets of L.A. and using various environment obstacles in his moves, he essentially helped popularize street skating), he never felt he could compete. He mentions at one point that when Mike McGill invented the McTwist (an insane 540 degree flip) he thought he was done for and would be pushed out of boarding. When he finally completed the trick himself months later, he was furious with himself for having taken so long to do it.

One might raise an eyebrow at the emotion of these mid-40s men recalling the different aspects of their careers and lives (especially since all 6 have not only become successful within boarding, but in their business careers as well), but in the context of the film and the interview segments it feels quite honest. Their relationship as a team grounded them all - they found a sense of belonging, a purpose and avoided the standard trappings of young people given too much too soon. When the sport suffered a lull in the early to mid-80s, they all seemed to be able to ride it out and helped to gradually build the sport back up to highly popular levels. With the X-Games today (it's hard to imagine those games could have come about without the Bones Brigade), the exposure is much greater than anything Peralta himself might have envisioned back in the 70s. In the end, whether you care a whit about skateboarding and its culture or not, Peralta's films have documented not just the sport and the excitement of seeing the impossible before your eyes, but the stories of some fascinating individuals. Isn't that what the best documentaries do? 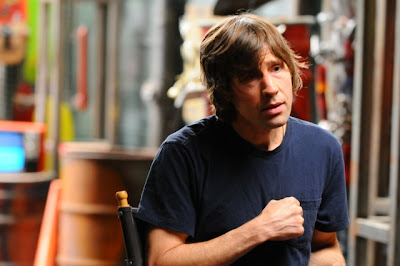