It's best if I just take the description of the Toronto Youth Shorts Film Festival (starting this Saturday June 2nd) straight from their web site:

"The Toronto Youth Shorts Film Festival is a volunteer-run not-for-profit initiative that works to bring a series of events for local young and emerging filmmakers in the Greater Toronto Area to showcase their talent and creations to an audience of independent film lovers."

It's more than just a showcase though...It's a forum for the filmmakers to meet with industry people, share ideas and - most importantly of all - get feedback from experienced filmmakers and their peers. In its fourth year, the festival appears to be growing and gaining steam. Given the overall quality of the sample of films I had a chance to see, it feels like the staff of the festival are getting the word out to some of the best young local talent. You can't help but want to fast forward 5-6 years into the future to see what these "kids" (not to offend any of the filmmakers, but I'm way older than all of ya...) will have created by then.

The three animated films I saw (all between 1-2 minutes) are all wonderful, charming and feel like much more mature work. The stories are somewhat simple and straightforward, but each has a distinctive feel to it and a real sense of creativity. The tools of today may make it easy for "anyone" to create, but they don't necessarily provide the imagination and inspiration these filmmakers all had. "Blind Luck" was the first of the three and it put a lift in my day straight away. There's just something about an animated character (even a dog) that, when drawn with certain details and attributes, can immediately make you smile. A working dog leading his blind owner across a street is distracted by a bright red ball and must choose between his instincts and his training. The gags and outcome are well realized, but that dog (and all his subtle expressions and movements) is quite fantastic. 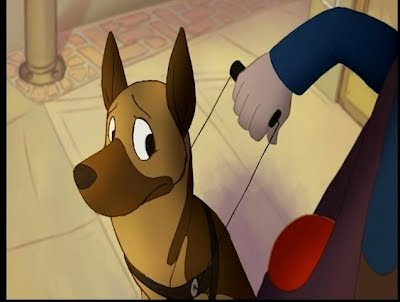 The second film entitled "Vernal Equinox" depicts, as you might expect, the arrival of Spring - though not without a fight. The Winter wolf is not ready to cede its time, but a helpful warrior is there to do battle with it to allow Spring to take its rightful place. Using imagery from fantasy, manga and probably video games, the mini-epic is over and done with in under a minute-and-a-half, but it leaves a lasting impression (if you can look past the image of a scantily clad feminine Spring needing the male warrior's help). The last of the three ("Amare") is the simplest in both design and colouring, but is probably the most charming - partially because of that simplicity, but also due to its story of a woman scorned and the man who looks past all of that to her inner true self. An idea simply, but quite lovingly, expressed. 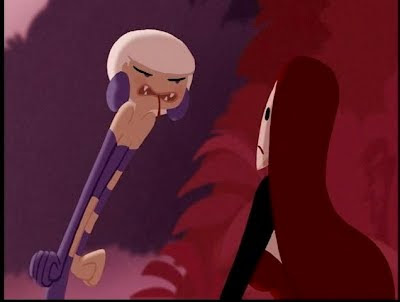 If the live action films (both fictional and documentary) don't quite live up to the animated ones, it's understandable. Typically running closer to 15 minutes each, the live action films tend to feel padded or like they have extended their reach a bit too far from their original ideas. Having said that, they tend to share a commonality: good solid ideas. I'll mention three of the eight I saw and hopefully follow up with a second post covering the rest before the festival starts on Friday. The first ("Backwards Rider") is a documentary about a local artist/environmentalist named Lesley Slowley. His claim to fame is riding his bike (at regular speed) backwards on the streets of Toronto (glimpsing behind him every couple of seconds to see where he's going). Given Lesley's recycled paper art, involvement with the Occupy Toronto movement and rather obvious dislike of rules, he definitely looks backward to move forward as a general rule...The film loses its sympathy with him, though, during an encounter with the police. Whatever your opinion is of his views and politics (e.g. whether you agree that the police are correct to cite him for dangerous riding OR that Lesley is correct to point out the pollution caused by their cars), it's all too obvious that he isn't interested in having the discussion as he shows no attempt to understand another viewpoint. It paints Lesley as less of a complicated person (not to mention less interesting) than I originally thought he might be. 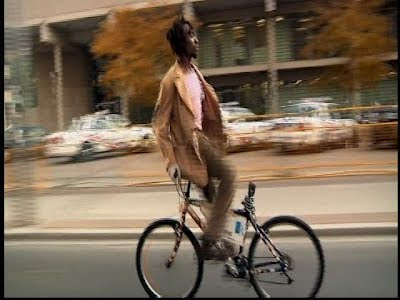 The next short called "Prolepsis" has one of the more interesting frameworks and central concepts, but unfortunately ended up being one of my least favourites. One example of the definition of the title is "the anachronistic representation of something as existing before its proper or historical time" which corresponds nicely with the faux-doc's plot point of a news report from the future somehow slipping into a standard news feed. As the government works the angles and the public frames it according to their own cultures, dissent arises, riots break out, etc. The film is patched together with TV news footage from various actual news networks, but also has some of its own "interviews" and footage near a barricade. A common issue with these type of films is trying to make the interviews appear natural and unscripted - an issue that certainly stands out here. As well, it exceeds its required running time by about double what it really needs, tends to stay with its interview subjects far too long and ends up restating numerous points. However, it's an interesting concept that shows promise.

The last is "Loss Together", a story built around the idea of "friendships" in the office and online that aren't really built upon anything of consequence. On a single day, the colleagues in a non-descript office have to deal with the death of a co-worker that no one really knows (except for the occasional Facebook status update) while preparing to go to a pub gathering in the evening for another co-worker's birthday (again, one that is mostly unknown to everyone). It's never quite as funny or dark or biting as it could have been with a stronger script and some needed editing, but it's still quite well constructed and has the makings of something far stronger.

The festival is screening its 31 films in three separate blocks (mixing animation, documentary and fiction into each one) on Saturday June 2nd. Check their web site for details on tickets and times. It's a worthwhile event that should provide bursts of inspiration for any attendee.

Email ThisBlogThis!Share to TwitterShare to FacebookShare to Pinterest
Labels: Shorts