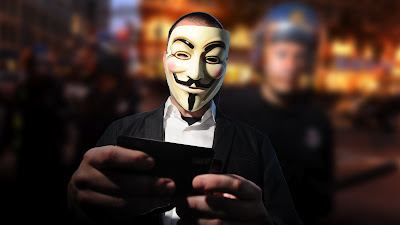 The history of the online movement/collective of activist hackers called Anonymous should be a pretty fascinating tale. Whether you approach it from a technological point of view, a social media one, a political one or simply focusing on how geeks have gained power, there's a great story in there. So why did I sour on "We Are Legion: The Story Of The Hacktivists" so quickly? It actually had all of the above and additionally gave some great insight into how many of the internet's major memes get started (via the 4chan site which was the initial launch point of the movement), but annoyance levels began to rise at the outset. The simple reason? The actual hackers interviewed.

I'm actually fairly intrigued by hackers in general and the concept of Anonymous specifically. If I don't agree with all of their tactics, much of my politics does lean in their direction, so it's not a matter of entering the film with any major issues against these people. But apart from a few examples, interview after interview showed me either self-important, entitled or childish views towards their roles within the larger scope of Anonymous. From early juvenile hacking escapades (one hacker chuckles over how fun it was back in the day to get a group of people to invade a SIM-like game for kids and create swastikas made from identical characters) to wide-sweeping generalizations about police and the importance of some of their successes, I didn't find these people to be great examples of activist leaders. It's a damn shame because there's so much more of interest to examine - the technical ins-and-outs of their hacking methods (or at least some of them), trust levels within the wide group, the variety of "targets" that have been considered, etc.

To be fair the film does give an idea of how Anonymous bubbled up from its roots and when it deals with the history of the amorphous group, it's actually entertaining. I do wish the film covered more in depth examples of specific hacking successes (having just read the fascinating account of how the Stuxnet malware was traced, I was looking for more), but I can't fault it on that front. It comes back to the main subjects of the film though - perhaps these were the best candidates that were willing to be interviewed, but when you pretty much dread any return to one of the talking heads, it's hard to establish empathy or engagement.
Posted by Bob Turnbull at 21:36