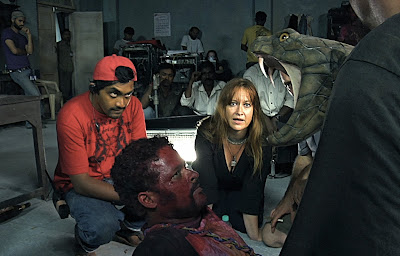 "They break for tea!"

The incredulous tone in Jennifer Lynch's voice when she says the above is one of the many clues that she really wasn't prepared for India. Not as a tourist and certainly not as a film director. When she accepted an offer to take the helm of the Indian production of "Hisss" (basic plot - snake turns into woman and then turns back into snake), not only did she not expect those frequent breaks on set, the very rough concept of time held by most, concerns about script sections being sacrilegious and a far-reaching lighting technicians' strike, but she certainly didn't think the entire control and final edit of the picture would be wrested from her. Penny Vozniak's "Despite The Gods" started as a simple behind the scenes EPK, but as Lynch's own fortunes began to fall, the story behind the film (and the footage Vozniak was capturing) became far more interesting.

Lynch had intentions of creating an examination of sensual female beauty. Her producers had a different concept in mind - pure exploitation. There's no doubt the concept lends itself to the latter, but Lynch's approach to several scenes, some careful shot-making and an emphasis on practical effects makes you believe she could actually pull off the former. She has a few obstacles to overcome though - not the least being her unfamiliarity with the customs and ways of doing business in India. Fortunately, she has a pretty great crew as evidenced by her assistant directors, actors and other various people (my favourite being the caterer who helps out with sound effects). Complicating things further is Lynch's own teenage daughter Sydney who happens to be spending the summer out of school on location with her Mom. She's actually quite intelligent and self-sufficient (several times during the film you actually wonder if she is possibly the most mature person in the room), but she's obviously a distraction for Lynch at times. Strangely, she's even more of a distraction for the producer.

As fascinating and entertaining as the behind the scenes issues are with culture, people and equipment, the biggest issue of all is nothing new - money. The producer warns Lynch early on that you can't make a $3 million picture look like a $500 million picture and at that moment you are certainly on his side. The investors only have so much capital to put up and agreements were made, so he comes across as a voice of reason. As the production wears on, his logic and reason start to dissolve as he tells her he can wrap some remaining scenes for her in a single day, starts trying to yell "Cut!" during filming (insisting that what they captured was good enough) and expresses his annoyance with Sidney to her Mom (which of course upsets the one person he needs to stay focused - his director).

Vozniak gets deeply personal footage of Lynch talking about the shoot, her Dad's own catastrophic experience with "Dune" and her life/career. It provides additional insight into her own process, her drive to be an artist and a whole mess of insecurities. Her honesty is actually quite endearing which is why it was awfully sad to hear her tell the viewing audience after the premiere that she counts the loss of the film "as the greatest loss I've ever had". The only version of her director's cut was destroyed by the producers and the film (with additional crappy CGI added) was turned into a run-of-the-mill B-movie. Despite everything, Lynch continues to make films - a little bit closer to home for the moment though. 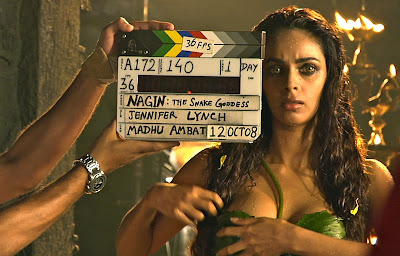