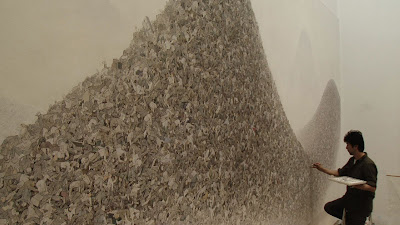 It's hard to say if Aida Makoto will ever truly let himself be happy. As an artist, he'll always be restless (as most really creative people are) and never completely satisfied with all his work, but he can't seem to be content with life. "Life is miserable if you can’t be an artist", he says, not quite convincing us that it's much different if you are one. Aida says he has ADHD and you tend to believe him when he takes one of his countless smoke breaks and continues to have a hard time focusing on the details of his paintings. Strange when you consider just how very detailed they are, but then you remember how long he's been working on them and that he may simply never finish them. His large painting of about 30 schoolgirls dressed in blue by a waterfall looks complete down to the last little leaf, but it's been in the works for 3-4 years. It's been shown at numerous art shows, but it's never quite finished. In fact, as he is setting it up at a new gallery, he sees it under a different set of lights and starts to completely reconsider some old choices. He even tells the gallery owner that if the painting sells, he wants to make sure that he can still finish it afterwards.

Another work in progress is the depiction of a mountain of businessmen's bodies piled high and rising out of the mist. We see him just beginning the details of each individual body at the beginning of the film while he works in a large warehouse gallery in China. The paintings are too big to really work on full time in Japan, so he's set up shop here over the summer and imported his wife and son as well. The film tracks his progress and as the summer comes and goes, his works are in various stages of not being completed. His family returns home and he stays behind. He returns for New Years festivities and then once again returns to buckle down since the businessman mountain painting is due for a showing. It shows, but it's still not quite finished...

Both paintings are quite remarkable. Not just for their size, but for the bits of detail as well as the entirety of the picture when you step back. His other artwork is quite conceptual and usually focuses on the somewhat perverse. No matter what, though, he continually questions himself and tends towards excessive alcohol consumption - even after what others might consider a successful showing (he tends to downplay things that go well). His wife works as an artist as well and seems to have a much more practical approach towards her work as well as her life. Raising their son has not been easy - he has his own behavioural issues - and it feels like she is still helping raise Aida as well sometimes.

The film loses its way occasionally by focusing on the young boy, even though there looks to be a very interesting story of its own there. The boy has similar issues as Aida does - he feels "different" than other kids, doesn't much care for playing with them and keeps to himself mostly (his parents believe he developed this complex partially from hearing a previous teacher continually putting down his two artist parents in front of him) - but we don't get much development of the storyline. I suppose you could view Aida's son as yet another "work in progress" or perhaps compare the film's tendency to wander away from the paintings to Aida's own inability to stay focused on them, but it doesn't help the viewing experience.

However, if this portrait of artist Aida Makoto isn't overly artful in its own approach to its subject, that's OK. Aida has more than enough of his own art to bring to bear. 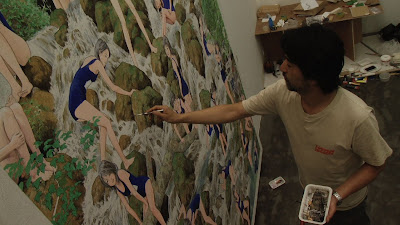