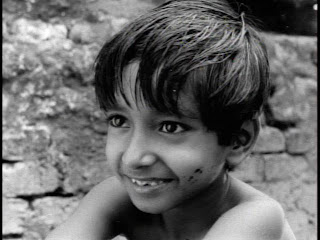 It's been a good solid two decades that I've been wanting to see Satyajit Ray's famed "Apu trilogy". As my interest in film started to poke its nose into various realms, I continued to see the trilogy (and particularly the first film from it - "Pather Panchali") get mentioned in discussions of foreign cinema and also land on various lists. Sometime later, I met a lovely young woman who gave me some deeper background on not only Ray's influence within the Bengali community, but also the rather wide range of artists that particular Indian region has generated. Just for that, I married her. Well, OK, there were a few thousand other reasons too, but it sure didn't hurt. My wife had always loved the gorgeous score from "Pather Panchali" (composed and performed by Ravi Shankar) and we played much of it during our wedding (mixed in with French Canadian folk music, Charles Mingus and King Crimson - yeah, it was a good day). Still, though, I had not managed to see the film. I missed it whenever it showed at the local Cinematheque and there were no Region 1 releases at the time. When one finally came out, word was that the transfer was terrible. So I put it off. I've been meaning to hunt down the Region 2 version ever since I bought my region-free player, but simply haven't done so. 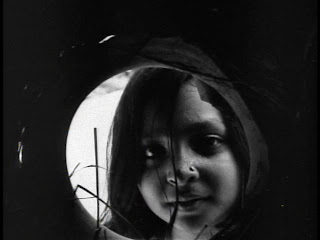 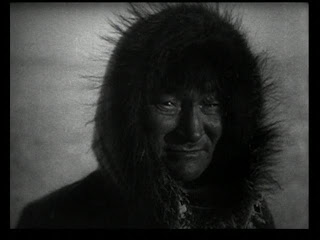 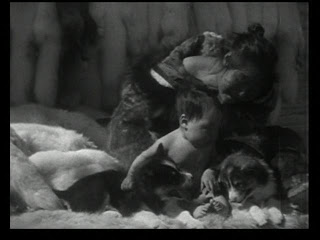 Similarly, Robert J. Flaherty's seminal documentary "Nanook Of The North" has been on the to-watch list for years as well. It's even more surprising that I haven't sat down to see it until now - it's readily available on Criterion, it's under 80 minutes long, it's one of the earliest feature length documentaries and it's also one of the first examples of a filmmaker playing with the truth on screen to get to a "bigger" truth. Herzog may be known for that today, but Flaherty was a good half-century ahead of him. It also provides footage from the North of my own country that shows a lifestyle that is completely alien to my own. So why haven't I seen it? I don't know, but isn't that why I'm doing this Blind Spot series? 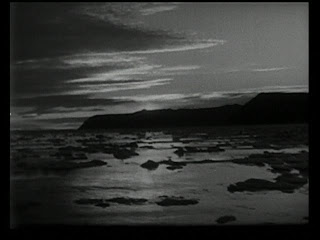 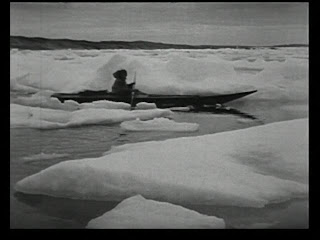 Once again, my pairing of films works out quite nicely...The stories are vastly different of course, but beyond the obvious pairing of foreign cultures documented in academy ratio B&W images, both films are wonderful at creating a sense of place. Not just the specific environment where the story is set, but also the pace of daily life, the chores, the family interactions and the difficulty of doing things that our modern Western culture takes for granted. And even in the compromised transfers of both DVDs, the cinematography - especially of the natural surroundings - is breathtaking. Whether it's the floes of ice, a steaming train through a wheat field, a lone cabin pitched against the huge Northern sky or reflected plant life in the dusk of a warm humid evening, these films cry out for pristine looking versions. I doubt that too much more could be done for Nanook, but Ray's films need far better treatment. Word is that Criterion might release the trilogy at some point (they provided a splendid version of Ray's "The Music Room"), so let's hope that many others can start filling in this particular blind spot in the near future. 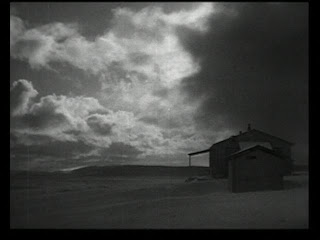 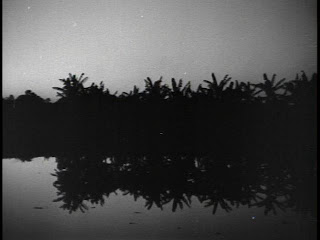 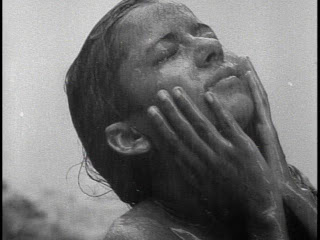 After viewing "Pather Panchali", I'll be closing off on the rest of the trilogy shortly. It's truly wonderful. There are certain filmmakers that have an innate ability to convey humanity in their characters. Kore-eda and Kaurismaki are two names that spring to mind (at least as far as current directors go), but you can bet Ray will be on the list now as well. It's not just the range of emotion, but the honest way it comes across. At the start of the film, the young boy for whom the trilogy is named hasn't even been born yet, but he is on his way. We meet Apu's Mom and sister Durga as they eke out a living while being "allowed" to stay within the confines of the family orchard. There's some history within the family as to proper ownership, but Apu's Dad isn't concerned - in his mind all you need is two good meals a day and new clothes twice a year. What more could anyone want? His focus is being an artist - his family has always been filled with writers and scholars and he has great hopes of writing a new style of play for the bands of travelling players that roam the countryside. Until then, he must go off looking for work on a regular basis and bring back his earnings to his family. His positive outlook is contrasted sharply with his wife who has to be worried about their daily existence, their reputation, how she is viewed as a pregnant woman and how to eventually marry off Durga (and what they would get in return). A great deal of effort is put into how the family is perceived and where they are supposed to fit within society - not even the larger society, but just the small one around them. Even the father isn't immune - once Apu is born, he wants to spend some of the little money they have to celebrate and show off to everyone in the community. This becomes a bigger issue when Durga is accused of stealing the bracelet of one of the young girls at the main house. Durga has been caught stealing food before and her Aunt sees the whole family as a bunch of thieves. Though Durga is defended by her mother, she later gets literally thrown out of the house until the end of day. Hardly fair in Durga's mind, since Apu (probably 6 or 7 at this stage) has stolen toys himself, but never gets punished. It's a clear demarcation between males and females in this portion of society - as much as many mothers aren't happy with their own lots in life, they end up forcing the exact same standards and rules that hurt them onto their own daughters. Though wrapped around these central themes, much of the film shows the simple life of Durga, Apu and their Mom. The children have free reign over the forest and beautiful fields as they play between chores. While the cinematography shows the grandness of their location, we also get a closer look at nature - bugs, dragonflies, rain falling on the leaves of the forest - to emphasize how closely these people interact with it even within their own homes. 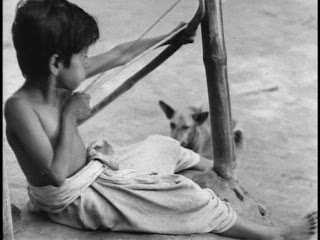 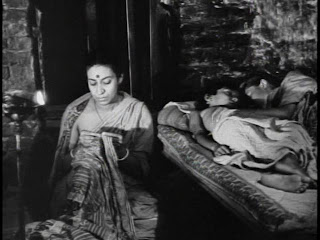 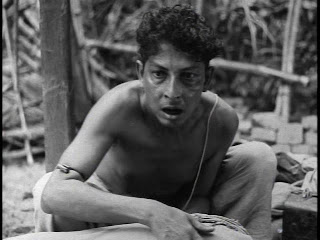 Of course, Nanook himself might scoff at their living conditions. He doesn't just live with nature, he has to fight with it every single day. Flaherty originally was part of an expedition to the large region East of Hudson's Bay and was asked to prospect it for possible growth in the areas of railway and mining. As Flaherty met the Inuit people who lived there, he realized that their way of life was slowly coming to an end - and so he began to bring up his cameras to document what he could. Since much of his original footage was lost and because he initially had a narrative feature in mind, Flaherty recreated many of the scenarios we see in the film. What we end up seeing is somewhat like a greatest hits of the Eskimo lifestyle: transporting the "family" via kayaks, building an igloo, capturing, killing and eating seals, etc. It's all quite simply shot and quite revealing - especially the more intimate scenes with Nanook's "family". Perhaps you've noticed the use of quotations around "family" - as it turns out, that's not Nanook's wife or children in the film. They are simply other natives of the region who were brought in to film these different events - many of which weren't even activities they did on a regular basis anymore. However, Flaherty felt it important to document the way that they did actually live - if Nanook doesn't actually hunt in exactly those methods anymore, he certainly used to do it and has the kind of skills that were required. The film even states right from the intertitles at the start that Nanook is essentially a composite of the people Flaherty met during his many years in the North. If he occasionally condescends a bit to them (calling them "happy-go-lucky", creating a scene where Nanook looks at a long playing record and tries to bite it with his teeth), there is an obvious appreciation of the people and the life. Yes, the seal capture and the kayak transporting (where members of Nanook's family start popping out of the kayak like clowns from a tiny car) were essentially faked, but the overall intent of the film is to provide the feeling of what it was like to live in this cold and often hostile environment. From that perspective, the film is a complete success. It doesn't just show the hunting activities or the building of shelter (though I had never thought they actually used ice as a window), but also many of the smaller details. For example, the snow is sometimes as dry as sand, so the runners on a sled have to be glazed with water before it can actually slide. That same sled is typically stored on top of the igloo at night in order to prevent the dogs from chewing the seal hide that binds it together. Flaherty even shows the minute details like the spit cleaning of a baby and the nighttime rituals. 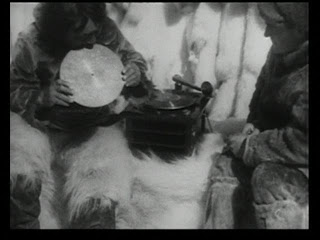 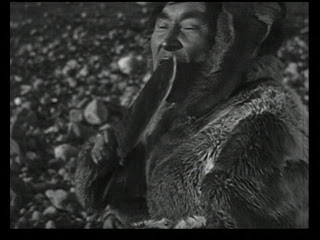 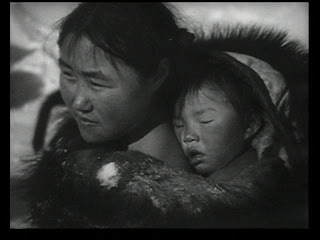 Though I'll never get a sequel to Nanook (the story is that Nanook - or the person playing the character of Nanook - actually died during final prep of the film), I'd love to see how their lives developed as the regions around them did. If their old ways of life died out, were they able to adapt? Did life become easier or harder for them? Flaherty's film doesn't just raise these questions, it makes you very much want to know the answers. By the end of the film, you even have feelings for the sled dogs (the shot of the dogs huddling at night in the cold, lashing winds is the perfect way to show the environment). Fortunately, I can at least follow up with Apu in two further films to see what wonders and heartbreak are in store for him while plunging myself further into a world I never knew much about. It's been a bit of blind spot one might say... 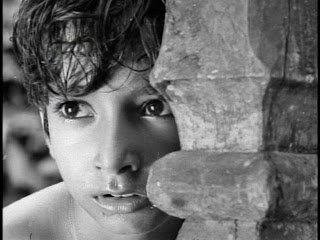