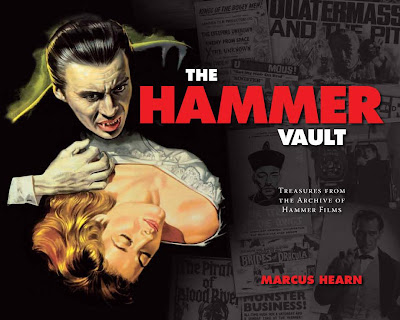 Let's state this right up front: Marcus Hearn's book The Hammer Vault is a gem. Whether you're a novice to the horror and thriller film output of Hammer studios from the late 50s through the early 70s or you've seen every last one of them countless times, this film by film survey of archival items (lobby cards, posters, on set photos etc.) and production notes is a fun and consistently fascinating stroll through the British company's history. The fantastic duo of Peter Cushing and Christopher Lee are both all over the book since they were the key figures of a huge chunk of the studio's output, but there's a wide range of coverage on a variety of personages (actors, directors, producers, etc.) as well as scripts, makeup/effects, marketing techniques, etc. If you have any interest at all in "genre" films, this book is well worth your attention.

I'm a big fan of these old Hammer films, but by no means a scholar on the subject. There's still a huge amount of their catalog I haven't seen yet (emphasis on "yet") and I've only scratched the surface of the history of the studio and its set of famed actors. So when I heard about this book (full title: The Hammer Vault - Treasures from the Archives of Hammer Studios), one of my first thoughts was that it may be a bit difficult to fully engage with the sets of artifacts, rare photos and marketing materials that form a large part of the book. It didn't take long, however, after the initial crack of the book's spine for all those concerns to bleed away - it just made me want to see all those movies I haven't yet seen all the sooner (not to mention revisit all the ones I have seen). Designed to be randomly browsed or read cover to cover, the book provides tons of facts, interesting snippets, great photos and loads of old promotional gimmicks which is perfect for fan and newcomer alike. 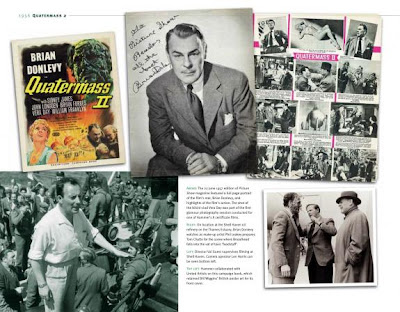 Laid out in chronological order with (typically) two pages per film, the book moves through a huge set of the proud British studio's horror, suspense and monster films (83 films in all) in full colour. The book is served well by being in a 12.5" x 9.75" format (which of course stretches out to an expansive 25 inches wide when open) showing a specific intention of allowing the eye to wander over each spread. Each film gets a couple of paragraphs detailing some production history, anecdotes about the cast or director and typically a few words about how the film was received critically and commercially. It's an interesting document of the changing times in England during that period - as the book steps through the films one by one, we get to hear about the public's reaction to the styles and topics within the films that Hammer was producing as the fortunes of the studio eventually start to decline. Though they tried to keep pace, reading the book straight through can feel somewhat like watching the slow death spiral of a company that keeps re-imagining itself while laying people off a bit at a time. You can only return to the Dracula and Frankenstein well so many times apparently (though those initial Dracula and Frankenstein films from the late 50s are prime examples of how to REALLY do a reboot).

I was exceedingly happy to see the book cover some of their lesser known thriller films like "Taste of Fear" (known as "Scream of Fear" in North America), "Maniac" and "Never Take Sweets From A Stranger" (swap out "Sweets" for "Candy" outside the British empire) - all of which are excellent and should be sought out immediately. The studio is known for it's gothic horrors, but it also very efficiently mined the vein of mystery thriller by bringing noirish sensibilities and great tension to some solid stories (or "mini-Hitchcocks" as Hammer referred to some of them). The background information on these films is just as interesting as the classic horrors and if their posters couldn't quite match the exotic nature of those scarefests, it didn't stop the publicity machine. A fine example of their ability to provide just a wee bit of exaggeration to their marketing is this quote from a publicity manual for "Taste Of Fear": "Final denouement explodes in your face with the force and unexpectedness of an atomic time bomb. Taste Of Fear will leave you a panting, gasping, nervous wreck!". Yeah!

Part of the fun of the book is trolling through the old marketing material - it's fascinating to see the older style approaches and find gems that would seem completely out of place on a modern day movie poster (not that today's blurbs are any better - just different). For example, this quote from the campaign booklet for "The Quartermass Xperiment": "Ask women this question - Would you steal your strangely afflicted husband from hospital?" Or this tag line from Dracula about its star: "Scream Boy. No, Dream Boy!" (granted, Christopher Lee was one helluva dashing young man). The book is also filled with loads of gorgeous, though never-intended-for-general-public-viewing, pre-production posters by Tom Cantrell (I have to say, the man knew how to paint a naked body...) and a section on unmade Hammer films with great titles like "The Reluctant Virgin", "Zeppelin v Pterodactyls" and "When The Earth Cracked Open".

The final chapters of the book cover the two brief Hammer TV series ("Hammer House of Horror" and "Hammer House of Mystery and Suspense") plus the resurgence of the studio in 2008 (with its first new film in decades "Wakewood" followed by the widely released "Let Me In" and "The Woman In Black"). It's a marvelous optimistic way to end this part of the Hammer Studios story and after reading this beautifully put together book, any film fan will not only desperately want to see a good sized chunk of Hammer's back catalog, but also be thrilled that they seem to be determined to add to it. 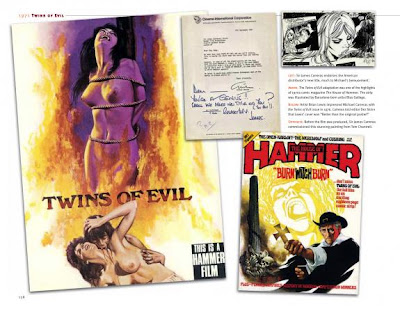