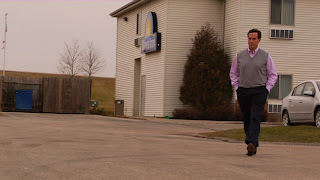 I'll be honest, I had scratched AJ Schnack's latest film Caucus off my list of potential "to-see" films shortly after I browsed through the Hot Docs 2013 schedule the first time. The promise of being a behind the scenes look at the Republican candidates during the 2011-12 Iowa Caucus filled me with a bit of dread. I have no love for any of the eight politicians the film tracks (and a healthy dose of disgust for some of them) and didn't particularly relish the thought of re-living the head-slapping moments that played out nightly on the news and The Daily Show. To be clear, that disdain isn't reserved completely for the right-wing (I have no need to revisit any of the electioneering of the Democrats either), but since the focus of the film was strictly on the first step towards nominating Obama's rival, I had very little interest.

Of course, I'm glad I reconsidered. The verite style of the film (ie. no narration, just footage that should "speak for itself") was a big reason, but Schnack himself as director was probably the biggest. He lobbied several years ago not just for higher quality cinematography in documentary feature filmmaking (which as far as I can tell has helped bring a more careful eye and strong aesthetic to the realm of docs), but a call to an overall broader view of the form. That alone gives him my attention. And if there's one theme that is becoming evident at this year's fest (due to its presence and absence in many of the films I've seen) it's the need to understand the position of those who differ strongly in ideology from you. I didn't expect to learn a great deal more about the political positions (ones which I typically disagree with - in particular the ones based on social issues) of these candidates, but hoped to garner some insight into the voter perceptions of what's "wrong" with their country.

This is where the film excels...Though it can be entertaining to watch the candidates work through a variety of awkward moments (Bachmann pimping her tent's petting zoo, Romney warning Big Bird to beware of commercials, Ron Paul struggling to close his van door) and even charming ones (Cain belting out a tune, Perry being distracted by basketball talk), hearing things straight from the populace has far greater meaning. Granted, the clips of Iowans commenting on speeches at the state fair and participating in the voting can occasionally be cringe inducing and frustrating - there are occasional thunderous bursts of ignorance wrapped in a lack of context and lack of awareness of the reality of life in 2012 (again, I expect there are numerous people on the "other" side that are equally clueless) - but there are also moments of very truthful and heartfelt concern. Particularly one from an elderly man, who at first seems like yet another "it's them dang furrenors!" crank, but ends with tears in his eyes that show a deeply held belief (though a spectacularly flawed one). One has to wonder how he came to hold these ideas and that's at least a start towards trying to understand. It's also around this time that the film starts to show a different side of one of the candidates...Only one of them was there to listen to this man, and only one of them actively tried to engage him in discussion while attempting to explain the complexity of the situation...And that was Rick Santorum.

The most incredible feat accomplished by Caucus is that it ended up making me root for a man whose ideology I find odious. I never want Rick Santorum to hold any kind of public office, but by the end of the movie you've at least gained, if not respect for him, at least a bit of respect for his methodology. He truly believes everything he says, shows real emotion, dives right into pressing the flesh with as many people as possible and gives just as much effort at answering a question from any random citizen as he does from reporters or moderators of debates. He visited every single one of the state's 99 counties by car with a small team and slowly, but surely, built good will. Granted, I probably wouldn't be on his side if I didn't know that his ultimate goal was out of reach, but support for him from the audience grew similarly to that of Iowans - and we were just as surprised with the end results.

What pleased me a great deal is that the film doesn't purposely look to put anyone in a bad position, but instead tries to show them as honestly as possible, record the events around them and garner spontaneous reactions. The lenses of the cameramen (including for a portion of the shoot, the great Ross Brothers - directors of Tchoupitoulas and 45365) have a sharp eye for small details, people's faces and markers of Iowa's landscape and culture. One of the finer examples of the strange inner workings of American democracy.
Posted by Bob Turnbull at 21:33