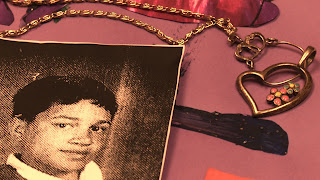 Director Marta Cunningham is glad I'm angry. The second showing of her fantastic documentary Valentine Road has just let out at Hot Docs and a few of us are milling about the lobby. She's more than willing to discuss the film, but even happier to gauge people's feelings and emotions after viewing it. Several of us mention the anger we feel at the sequence of events, the many points where warning signs were missed and the absolute failure of just about every adult in the film to do the right thing for the students in this particular school. She says that she hopes we hang on to that anger so that we can turn it into something positive - like taking action in regards to local issues or simply helping where we see fit.

Well, it's a few days later now and my anger has subsided somewhat - but not completely as it's still hanging in there. Via its nuanced look at the complicated interactions and issues that led to the 2008 murder of a 15 year-old boy in his classroom, Valentine Road ensures that the feelings will linger. You may remember the case - a Grade 8 boy in Oxnard California named Larry King asks another boy in his class (Brandon McInerney) to be his valentine. A few days later, he lies dying near his classroom computer after Brandon shoots him twice with a gun he brought from home. It's a horrible crime emanating from intolerance and lack of education, but it's far from the whole story. Cunningham begins to introduce us to the many people involved in this story - friends, family, teachers, girlfriends, half-brothers, cops, lawyers - and takes us through the tragic backgrounds of both the slain boy and the killer. The cast of characters continues to grow as the film moves beyond the incident, through its aftermath and ever so slowly towards the trial. 3 full years go by from the time of the murder to when the trial finally takes place and then stumbles to a mistrial. A plea bargain is finally reached, but no matter how you view the story there's bound to be something in it to get your back up.

So why the anger? The story is tragic enough as it stands: both boys left on their own at early ages with little support from any parents and only their own instincts regarding how to cope. Larry keeps his sexual orientation questions to himself and struggles until he finds a kind-hearted group home that lets him finally discover who he is. Brandon on the other hand is left at times hiding under a living room table while his Dad furthers his meth habit and winds up getting "mentored" by some of the worst possible people. While Larry begins to express himself at school via his girlish outfits, makeup and usage of feminine names for himself, Brandon responds in the only way he has ever been taught and exposed to: physical violence. But as the story spools out...We hear of the school's incompetence and reluctance to deal with any of the many moments which led to the shooting; we hear from Larry's horrendous Grade 7 teacher who by all accounts should be fired for what she says in the film; we hear some of the most incredulous victim-blaming I've ever come across by an "expert" for the defense; we hear from the prosecutors who are hell-bent to put 14 year-old Brandon away for life; we hear from the defense attorneys who are hell-bent to make sure he isn't; etc. Oh, and we get to hear from some of the jurors of that hung jury...Look, I'm a reasonable guy. I'm a person who sees a great deal of grey in between the black and white polar opposites of so many discussions that occur these days (at least, I like to think I am). I've only once previously exclaimed out loud my opinion during a theatrical showing about something someone on screen has just said. I can now count a second time. I admit to not adding anything of substance to the conversation when one of these horrid, smug, self-satisfied ladies of the jury offered her opinion, but the frustration had reached its limits.

I grant you that this may not sound like a fun time at the movies, but it's a vital film. It doesn't cause your anger to be directed solely at individual ideas, but at an entire way of thinking - or more accurately, at an epidemic of not thinking, inaction and apathy. Cunningham has a great feel for when to shift from one part of the story to another and from one character to another so that it helps to weave all the different strands together into one big ball of tragedy while also gaining remarkable honesty from those she puts on film. Additionally, she manages to give the viewer an extraordinary strong sense of place - her inserts of the neighbourhood, the focus on different parts of the school & people's homes and the framing of her subjects provides the needed context of the environment. It makes you feel like you know the place. It makes you feel like it could happen right in your own neighbourhood. And it makes me want to make sure it never does.
Posted by Bob Turnbull at 23:20