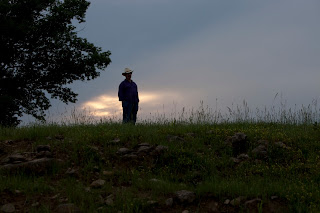 Tucked into the North-West corner of the state and hugging the Tennessee River, Muscle Shoals, Alabama is a slow-paced town of about 13000 people (if you sift it out of its Quad Cities region). But aside from its intriguing name (taken from the shallow areas of the river where mussels could be found), what makes this Southern city so interesting and worthy of an entire documentary about it? Three reasons spring to mind...

The music...That swampy, bluesy, soulful music that pushes the rhythm section up front and then drags all of the vocalist's deep seated, long buried emotions out into the open. Aretha Franklin, Percy Sledge, Wilson Pickett, Etta James, Otis Redding and The Staple Singers all cut seminal sides of music here and influenced countless others - many of whom later came to Muscle Shoals themselves (Paul Simon, Bob Dylan, Bob Seger, etc.). Duane Allman just about forced himself into the recording studio as a session guitarist and convinced Pickett to cover The Beatles "Hey Jude" - the results (a revelation to me in this film) becoming a template for The Allman Brothers. Lynyrd Skynyrd's "Sweet Home Alabama" (as tired as it has become from classic rock radio) has never sounded as fresh or alive than it did playing over the end credits of the film. It's said that the black artists from this area of Alabama used styles from country music while white musicians incorporated blues & gospel elements. The results lead directly to the Muscle Shoals sound - reason enough to encourage a melting pot of cultures - which permeates every corner of the film. The soundtrack is stupendous and sounded staggeringly great in the confines of the Bloor Theatre.

The place...The film gives you a great sense of where you are - the lush green along the river, rolling waves of tall grass, the open space and lack of tall buildings, the mud that looks like it'll never completely wash away - and feels like a separate character. When the musicians who grew up here talk about why they don't want to leave, you firmly and unreservedly believe them. For a film primarily about music and those who made it, it's quite beautiful and becomes a visual feast along with an aural one. I swear the theatre felt like there was a fresh country breeze wafting through it after the film ended. This helped to swirl up the dust and grime that had covered us while we visited the banks of the Tennessee.

The people...At least within the confines of the recording studios, there was a blindness to the colour of anyone's skin. Outside, it was more difficult to keep the white and black musicians and technicians together (if only because of segregation laws and the public's attitude towards the mixing of races), but inside the walls of the two main studios the film examines, there seemed to be little concern - the music was what mattered. Though oddly enough, Duane Allman actually found it more difficult to "blend in" at the time (late 60s) due to his hippie appearance. Fortunately, that led directly to him staying behind at lunch one day to work with Pickett. The majority of the story revolves around producer Rick Hall and his session musicians known as The Swampers (if that suddenly makes you think of the lyrics to "Sweet Home Alabama", well, there's a pretty good reason) - all of them white and all of them renowned for their ability to get right down into the heart of soul music. Hall has the most tortured story (losing his wife in a car accident and making several bad business decisions) and though his stubborn ways have dealt him several blows along the way, he's still got the chops behind the boards and can still push the singers to their best performances (he's famous for purposely antagonizing Etta James - dude had guts). The Swampers had left him and his studio (where they were essentially the house band) to form their own studio down the road a patch and had many successful years in the 70s and 80s helping to record mainstream, blues and soul artists. They too had a few major opportunities slip by them: The Rolling Stones recorded several tunes for Sticky Fingers there (including "Brown Sugar") and had fully intended to come back for Exile On Main Street, but Keith Richards wasn't allowed back in the country; Lynyrd Skynyrd had recorded "Freebird" with them, but when The Swampers refused to edit it down to a 3 minute 45 second single, the record company pulled the band away. They did get to tour with Traffic though (an odd mix at first thought, but not after looking a bit closer) and are talked about with reverence during the film by Richards, Mick Jagger, Bono, Gregg Allman and a bevy of others.

All three of these reasons explain why the town of Muscle Shoals is so fascinating. And the film showing all three of these elements is easily one of my very favourite cinema going experiences so far this year.