One Of Those Moments - "Only The Young" 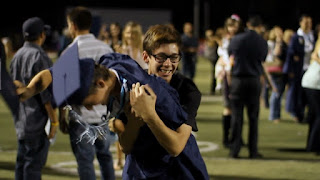 It's pretty much the very last scene of the movie - a wandering documentary about two teenage boys, skateboarding, a girl and a whole lot of unknowns about everyone's future - as the high school choir rises up on the soundtrack and two best friends hug during grad ceremonies and wrestle each other to the ground. This rousing and wonderfully joyous moment showing the unrestrained glee of these two boys at simply being in each other's company, sums up nicely what those tight bonds mean at that age.

It's now available on DVD in a single set along with the most awesome Tchoupitoulas.
Posted by Bob Turnbull at 21:25

Email ThisBlogThis!Share to TwitterShare to FacebookShare to Pinterest
Labels: One Of Those Moments