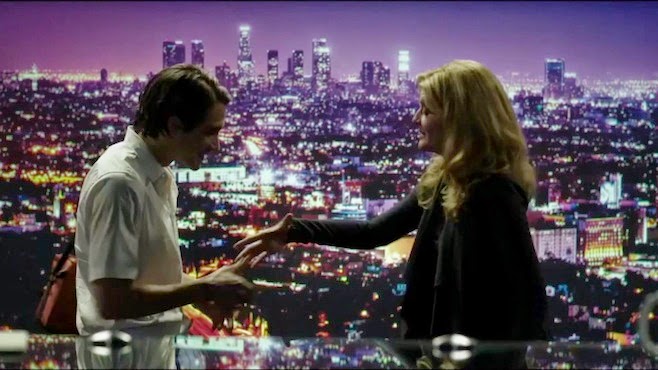 Dan Gilroy's Nightcrawler is essentially a perfectly crafted film. As it tells the story of naive scammer/thief Lou Bloom (Jake Gyllenhaal), the film never once seems to hit a sour note or lag its pace. Through our initial intro to Lou, some fleshing out of his character, his discovery of a new possible career path and the film's gradual shift to action and cynicism, there aren't any dead spots or moments where you might question the film's direction. It's not due to any attempt to dull the audience's senses through too many fast paced cuts or loud obnoxious songs, but simply because the damn thing is so incredibly engaging from start to finish.

Lou is a con man and thief who seems to get most of his ideas and conversation points from Internet education videos. After a few of his failed attempts at getting work (using his "selling skills"), he stumbles one night on a car accident scene and witnesses some freelance videographers taking footage of the wreckage and carnage. He learns that you can make money doing this by selling the videos to TV stations. He asks the videographer Joe (Bill Paxton) for a job and is rebuked. Being the "hard working individual" that he is, he decides to go it alone and buys himself a cheap camera (from the proceeds of a theft). Of course he makes a mess of it initially, but Lou has a unique skill - he learns from his failures and builds on them. After getting a sale with one of the stations, he starts to develop a relationship with the news producer Nina (Rene Russo) and becomes more aggressive at getting the kind of footage she wants. Knowing that "if it bleeds, it leads", he gets a police scanner, an assistant named Rick (a great and very entertaining turn by Riz Ahmed) and aims for success.

As he gets better at it and even beats Joe at his own game, the confidence begins to build and the film picks up steam. He turns Joe down flat when he's offered a partnership with him, spouts corporate platitudes to Rick (of particular note is his "performance review" to Rick which is both hysterical and depressing because of how accurate it mimics a corporate training seminar) and gets himself a bright red Mustang. When he manages to get to a crime scene at a private residence ahead of the police, he doesn't hesitate to enter the house and get fresh footage of the victims lying in their own pools of blood. He also happens to get the criminals on tape as they flee, but he holds on to that video for his own purposes and doesn't even share it with the police. One might say that his moral fibre is of the flexible variety. Things escalate at this point and the film has numerous scenes of delicious tension and one major set piece of action so perfectly created that the audience at my screening deservedly broke into spontaneous applause at its conclusion (it's so good that you don't realize you've been gripping your chair the whole ride). The film has little good to say about U.S. TV journalism, but does so in a manner that still manages to find an inciteful point of view. It's not a happy one, but what news story is these days?
Posted by Bob Turnbull at 00:47