TIFF 2014 - A Pigeon Sat On A Branch Reflecting On Existence 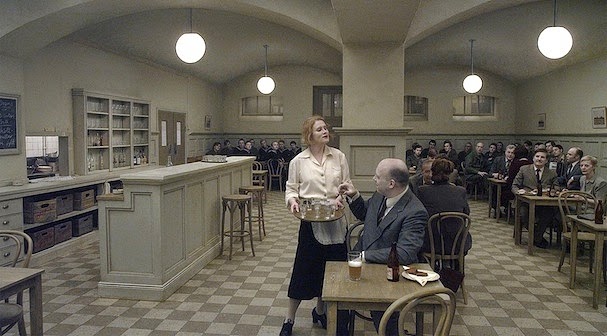 How do you review or even talk about a movie that you've eagerly (very eagerly) been waiting to see for 7 years? A movie that brings deadpan to new levels of dead? A movie that packs in little bits and pieces into carefully constructed frames with long shots and no camera movement? A movie that closes a trilogy on the "human condition"? I'm not sure, but I do know that I loved it. Every single static shot, every single pasty white face, every single line delivery, every single bit of marvelous set design and every single surprising image that helps build up Roy Andersson's thesis about our species.

My affair with Andersson's set of masterpieces (I truly do not bandy that word around easily) began with his 2000 film Songs From The Second Floor which seemed to gives us a singular view of purgatory. Operatic singers on subways, constant traffic jams and people laying in wait in fields make up a world that seems disconnected from the rest of humanity. The colour has been drained away from the walls, the clothing, people's faces and life itself. No one cracks a smile, but there's plenty of humour throughout (a lot of it dark) and moments of simply glorious cinema. Andersson followed this up seven years later with 2007's You The Living - a film that almost made me burst out in tears at the simple beauty that was right in front of its characters but being missed on a daily basis. It's a movie that excoriates those who choose to complain and whine about things they don't have, pine for things they can't have and ignore what they already have. Again, the static scenes force your eyes to roam the landscape of these constructed sets and rooms and pick up on Andersson's themes while also laughing at the intrinsic head-slapping obliviousness of humanity. It's punctuated by a set of scenes near the end that moves from a funeral to a honeymoon train trip to a woman in a bathtub singing that remains one of my favourite stretches in all of film.

So what about A Pigeon Sat On A Branch Reflecting On Existence? The third and last installment follows the same style as the previous two (thou there's less pastel blues and greens this time out) while it works its way through what are essentially sketches that are loosely tied via characters - in particular a pair of entertainment gadget salesmen (the "classic" laugh bags are a popular product) who simply want to bring fun to other people even though they seem to take no joy in it whatsoever. There seems to be little fun for any of the inhabitants here though. They all seem to be chasing something with little regard for other people or wallowing in their own self-pity - instead of occasionally reflecting on their lives and the possibilities (like we presume the pigeon is doing as it pops up on the soundtrack occasionally).

Two key brilliant (and completely different) scenes cement this film for me...Firstly, a bar scene set in 1943 as the owner/bartender Limping Lotte croons a sales pitch to her customers about dollar shots to the tune of "Glory, Glory, Hallelujah". The military men at the bar sing back (using the same tune) that they would like a drink but have no money so what are they to do? This sets up a back and forth as Lotte smilingly sings back that all she requires is a kiss if they are willing...And they are willing...It's such a wonderful depiction of how humans can interact, can be kind to each other and can create these moments of wonder that I grinned like an idiot throughout it. Contrast this with the section "Home Sapiens" from late in the film - it starts with a monkey receiving electro shocks from an uncaring technician and follows it with a human rotisserie for slaves that, as it roasts them inside, creates music for the pleasure of the aristocracy. It's a moment that sucked the air straight out of the audience's lungs. An almost paralyzing silence came over the crowd as we were shocked and disgusted at this ridiculous concept - while also knowing that things equally as pointless and horrific have occurred in reality.

Which is the beauty of Andersson's films - through absurdity, humour and the occasional stunning image, he brings you both the warmth and the horror of humanity. And leaves it up to you what to take away. There's nothing else like it. 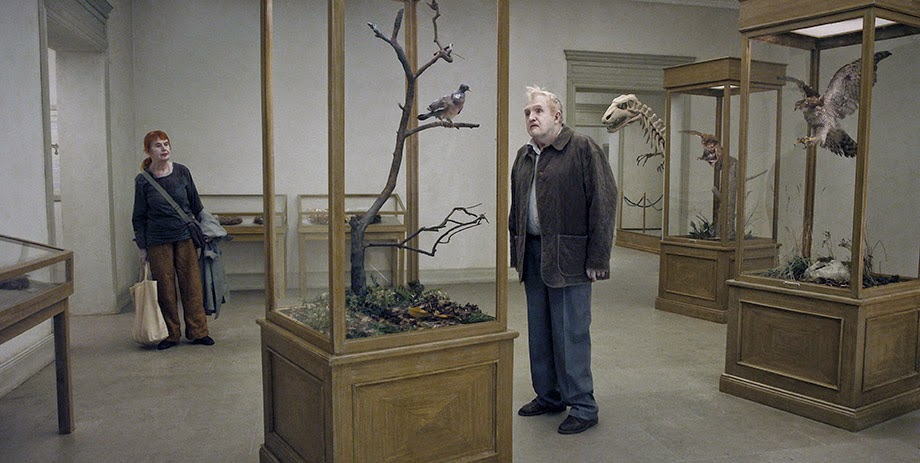