The Times Of Harvey Milk 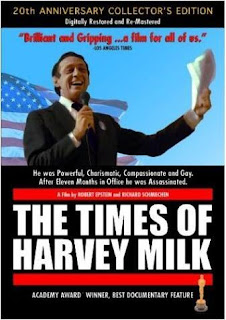 Harvey Milk was the first openly gay city politician elected in the United States. In 1978, after barely a year as a district supervisor, both he and the then mayor of San Francisco (George Moscone) were assassinated.

So begins this 1984 Oscar winning documentary at a press conference with the announcement of the two murders. But before we find out why this happened, we need the backstory. The film gives us the basic treatment of the life of Harvey. His roots, his early understanding that he was gay (he figures it out at 14) and further details leading up to his 4 attempts at getting onto the San Francisco city council. Nothing Earth shattering here, but via interviews and old news footage we begin to get a feeling for Harvey and his importance to not only the local Gay and Lesbian community, but the city as a whole.

It's an interesting story, but it's not obvious why the events you know are about to happen then take place. You know who commits the crime, but aside from some minor disagreements between the parties, you wonder how things could escalate. The film continues from here through 4 separate sections: the build up to the murders, the day of the murder, the wake that evening and then the trial.

The battle over Proposition 6 - a proposed California law that would have made it illegal to be gay or lesbian and teach in the Public School system - is where Harvey really began to come into his own and become more recognized outside his home city. The arguments by politicians and citizens that support the Proposition are fascinating as they always come back to center on a concern for "the children". Here the film also starts to come into its own. It still uses the standard techniques to cut old news footage with more recent interviews, but it does so very effectively to build up the conflict. From here the film just gallops along and is nothing less than fascinating for the remainder of its running time.

After the crazy news footage which follows the shootings (cameras in the building tracking cops running all over the place, body bags being wheeled into elevators in upright positions, etc.), we hit the emotional core of the film - the candlelit vigil organized the night of the killings. Even the grainy footage can't take away from the beauty of the entire width of a street, as far as the camera can pan, completely filled with people holding candles. There is calm reverance for the two murdered individuals even amidst some spectators yelling "Where's the anger!?". There is quiet confidence as the trial begins that justice will be served for their fallen heroes.

But really, who could have predicted the twinkie defense?

As with the best documentaries, "The Times Of Harvey Milk" expands its scope. In this case asking questions that are still relevant today - what will society tolerate and allow in order not to feel threatened?

Mark Isham's lovely score (he does a boatload of film music and this is likely one his best) plays over the end credits as we begin to see some of the main sponsors and those who helped fund the movie. The list of names morphs from film groups to organizations to individual people. And the list grows. At least a hundred or so. And then the last line scrolls by after the names (I'm paraphrasing here): "And thanks to the 751 other people who helped fund this project..."

A remarkable film.
Posted by Bob Turnbull at 23:36