Behind The Mask: The Rise Of Leslie Vernon 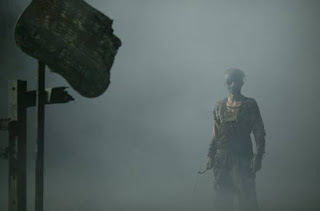 This review is for the Final Girl Film Club.

The Toronto After Dark Film Festival had its initial run last October and I was thrilled to stumble across it just before tickets went on sale. Especially when I found out that Kiyoshi Kurosawa's latest Retribution would be playing there (I think I was one of the few that really liked it). After noticing that the Pang Brothers also had a film there (Re-Cycle - shoulda skipped it), I decided to go for the 4-pack and roped in the fine ninja-clan battle film Shinobi and the truly unbelievable Funky Forest. I had such a great time at all the films (except the dreadful Pang Brothers one) that I decided to belly-up to the ticket window for the final night screening of the closing film - Behind The Mask: The Rise Of Leslie Vernon. It was one of my better recent spontaneous decisions.

Some basics about the film - it begins somewhat as a mockumentary style look at an up and coming serial killer who hopes to follow in the footsteps of Freddie Krueger, Jason Voorhees and Michael Myers (in the world of the movie, those horror film icons actually existed). A student documentary crew follow him around during his preparations for his big night and we learn many of the tricks of the trade and the mythology of those late 70s horror films (Halloween, Friday The 13th, etc.). Leslie even has a retired psycho-killer as his own mentor. But as the crew get more involved, the story starts to shift from mockumentary to a real horror film.

The extended trailer should pretty much lay it out:

Yes, that's Zelda Rubinstein at the beginning of the trailer...And Robert Englund shows up too. So the references are knowing and clever, but they're done with warmth and fondness as opposed to any kind of ironic detachment (no potshots at Scream here - just distinguishing between the methodolgies). Leslie's preparations are documented by the team of journalism students and include stalking the "virgin", planting newspaper articles about his family history so that she finds them, doing cardio in order to be able to chase fleeing teenagers, etc.

The film is well paced, ingenious and a lot of fun. It shines mostly when it works with those conventions of horror films and weaves them into the story (occasionally poking fun at them too). In particular, the mid-section of the film when Leslie steps young journalism student Taylor through his plan for the big night. This section encompasses a great deal of the meat of the film - the breaking down of the slasher genre into its components to analyze a style and story that the filmmakers obviously love. Leslie explains to Taylor the Yonic imagery of the environment (Yonic is the female counterpart to the term Phallic) where the big night will take place and relates the sanctity of "the closet" (when a victim hides there) to the womb. This all ties back to the "Final Girl" he hopes his target ends up being - will this young girl take matters into her own hands (and there's discussion as to what it is she really is "taking into her own hands"), choose to fight back and become a woman in the process? There's also the gentle mocking of the genre conventions - when Taylor asks why Leslie takes into account the breaking of the second floor windows as an escape route but doesn't concern himself with the first floor ones, he answers back that none of the victims ever seem to think to escape that way - "you'd think they would..." he says offhandedly. 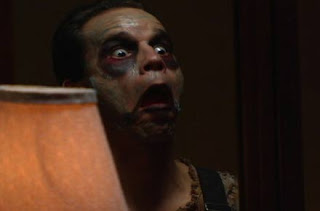 There's some good gags and setup previous to this that flesh out part 1 of the film - the documentary filmed portion takes up about two thirds of the running time. Up until this point, the entire film has been from the point of view of the two cameramen following Taylor and Leslie and is the footage that is to be used in their final story (actually there is one previous scene that briefly jumps out of the documentary footage - it is entirely around the first "kill" of the movie). The two cameras allow for the cutting between shots so the visuals stay reasonably interesting.

But then...Just past the hour mark, the cameramen shut down their cameras and the film jumps to an external viewpoint like standard horror films. To heighten this, the sound field opens up to surround the viewer (away from just 2 channels like the previous part of the movie). The documentary crew are now in the story they were covering - part of Leslie's big night. And though it isn't terrificly scary or filled with dripping tension, it's still a great deal of fun because it's dealing with all the conventions and plans Leslie took us through previously. And yet the viewer is still unsure where the story will end. It's a neat trick and well executed.

Where it diverts from the standard genre films is in the acting - it's uniformly quite good. In particular, Nathan Baesel is perfect in the title role. He's very funny, charming enough that you can see why the students stay with him and then flashes his violent side when necessary. Scott Wilson also deserves special mention as his mentor. They play it quite deadpan and it delivers much bigger laughs that way.

Horror fans (of the "classic 70s" genre) should really love this film, but only if they understand it isn't exactly like those films - it's a tribute and a loving one at that. First time director Scott Glosserman has done a superb job in creating an incredibly enjoyable film.
Posted by Bob Turnbull at 21:31